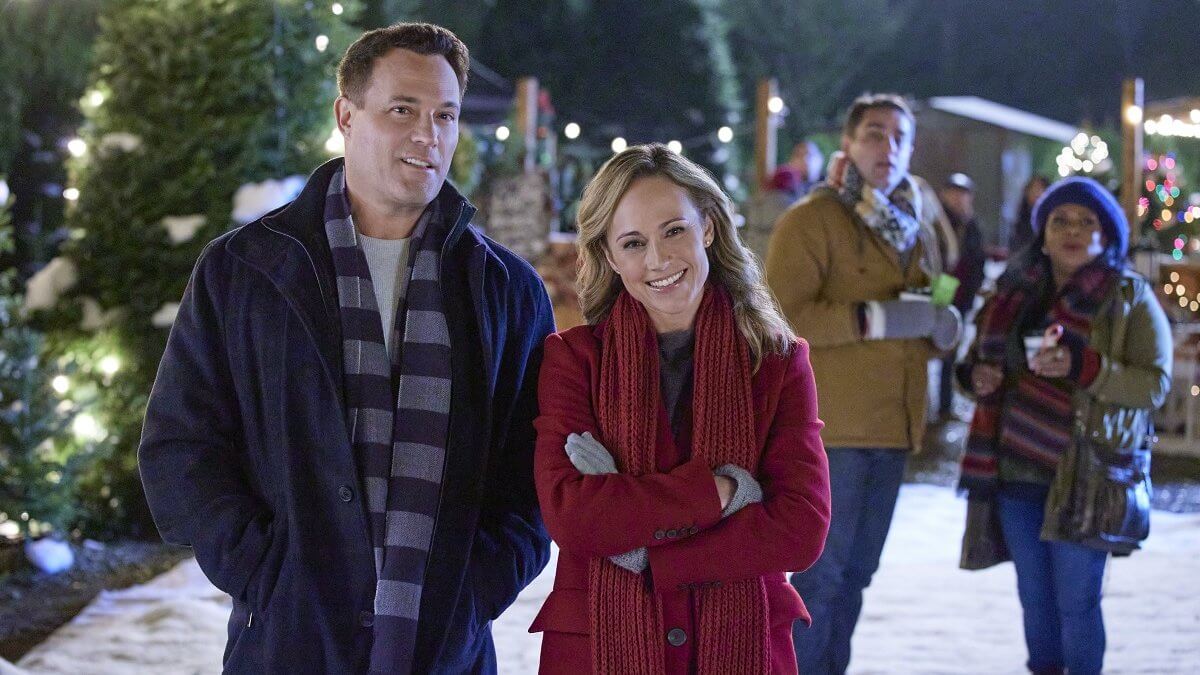 This Saturday on Hallmark Movies & Mysteries, Nikki DeLoach stars opposite David Haydn-Jones in Five More Minutes, a Christmas-themed take on the Scotty McCreery song. In the film, DeLoach is Clara, a teacher who comes home to have Christmas with her mom, Bonnie (Sherry Miller, who we recently saw as Shane’s mom in the last Signed, Sealed, Delivered). It’s the first holiday since they lost Bonnie’s father-in-law and Clara’s grandpa (Eric Keenleyside).

Overwhelmed with all the things he didn’t have time to tell her about running the family candy shop, Bonnie’s glad to have Clara home, and they’re both still navigating what to do without him in their lives. Clara’s a bit adrift, too, learning that her job is done at the end of the school year and uneasy about a near-proposal from her boyfriend, Blake (Jason McKinnon).

She’s happy to dive into the shop again, which is full of memories of her grandpa, but she misses him, and she makes a wish for five more minutes to hear him again. Then some holiday magic happens, an old journal and new employee (Alexander Jones), appear and she gets her wish in unexpected, wonderful ways.

She also reconnects with her first love, Logan (Haydn-Jones), who enlisted without telling her back in the day, which devastated both her and Bonnie. And Bonnie finds a new friend in Edward (Serge Houde), who’s also grieving a recent loss.

DeLoach filmed the movie, which reunited her with her Cranberry Christmas director, Linda-Lisa Hayter on a script written by Andy Sandberg and Jamie Pachino, in Vancouver in September. When I chatted with her for Taking the Reins, we spoke about the project just before she began production. The script came DeLoach’s way this summer, just as she lost her dad, right when she needed its message.

“I have a big faith and I’m a big believer in God and everybody has different words for that, but for me, it is that God is love and is that energy that connects and binds all of us. It’s how we are created and how we move and all of it. And God never ceases to amaze me,” she explains.

“The night before my dad’s service, I couldn’t sleep. And Hallmark had sent me earlier that day, this script to read. And so I just decided to open it up and just read it. It is a story about grief. It is a story about a woman who has lost the grandfather who raised her. And it’s the first Christmas that they have to get through without him.”

“But the thing about the script that’s so interesting and so beautiful and so mirrors where I am in my own life and why God is so amazing is that she is trying desperately to be able to feel him, to connect to him. And so there’s also this level of spirituality and magic and mysticism to the script of how the people who have crossed over find us and the gifts that they leave us and the ways that they try to talk to us and communicate with us along the way.”

“There were these tiny little things in the script…like one of the characters loves pulled pork barbecue sandwiches. Well, that was my dad’s favorite thing to eat, he became obsessed with them. So when you think about that, what are the chances…of all the foods in all the land that this script would be talking about pulled pork barbecue sandwiches? I just kept reading it, thinking, ‘This is not just a script and not just a Christmas movie.’ This is my dad, saying to me, ‘I am never not with you.’”

DeLoach also has Christmas for Keeps coming December 18th, also on Hallmark Movies and Mysteries, although you won’t see her onscreen. She and her Taking the Reins producing partner, Megan McNulty, wrote the script, their first screenplay credit for the network. “It’s about a group of kids that are in their late twenties. They’re on the precipice of being 30 and it’s so fun and it’s a true ensemble,” she says. “It’s very different, and we’re so excited about it. And we’re so grateful to be able to have this opportunity to tell this story. ”

Five More Minutes premieres Saturday at 10 pm/9c on Hallmark Movies and Mysteries in the US and will premiere on W Network in Canada on December 4th.

Aftermath Preview: “What the Thunder Said”