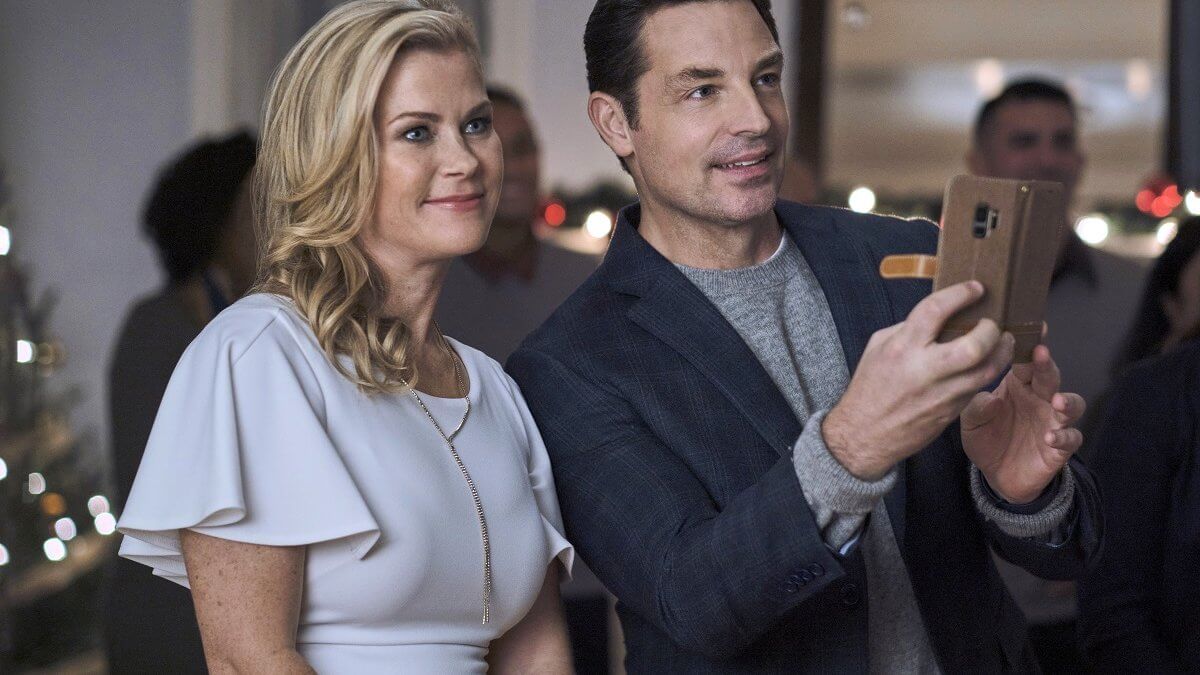 When Nicky returns home at Thanksgiving and stumbles upon an unread, unsigned Christmas love letter from high school, she’s bumped off her axis, and identifying the sender becomes her holiday project alongside helping her parents pack up their house while realtor Derrick finds the perfect house for their next chapter. I caught up with Sweeney by phone to chat about the project.

Sweeney was involved in the project from its inception and says she wanted to create a story that was about a romantic love, and a love between female friends. “That was really important to me. I love that Hallmark was willing and interested in tackling that. You get the benefit of two different romances along the way, and when you feature these two best friends, you get a little bit of everything,” she says.

“It was this special story of a friendship between these two women who are both successful in their own right. But they both learn something they need to work on. And I loved the idea that…every woman knows…her best friend is the only one who can tell her what’s really going on. You have to have someone in your life that can tell you the truth. And that’s what I think these women provide for each other’s friendship.”

Casting was a key ingredient in building the right energy among the ensemble, and making us care about the two couples and the BFF relationship. “Each of their love stories was really important to the story.  We found a good balance between all four actors. We worked well together and the chemistry was right between all four of us,” Sweeney explains.

“And each actor is strong in their own role. Erica is such a talented actress and she and I clicked right from day one. We had a lot in common and we found a connection that helped us really feel that friendship bond right from the beginning. I had not had the chance to work with Brennan. It was so fun because we’ve met each other so many times, and he does such wonderful work with my friend Lacey [Chabert]. So he came highly recommended, and I was just so excited to have him.”

Richards has his biggest Hallmark role to date, with his character working hard to conceal a holiday surprise from his fiance, in cahoots with his soon-to-be stepson, Anthony (Glen Gordon) until his mom, Miriam (Catherine Barroll) clues him in that he’s lost sight of the reason for the season. “Michael is so talented. I thought he did such a fun job of being like the fun secret keeper. He’s such a guy, wanting to surprise Simone, and then of course it turns out that [he’s] hurting her feelings to get to the surprise part,” she says.

“Miracle on 34th Street is one of my favorite movies. I watched it with my mom a thousand times. And so the idea [of the] the dream [house] is something that’s always just struck a chord with me, and felt so Christmasy and magical. In one scene, he played [a reaction] so funny that it made me laugh out loud when we were in editing in post-production.”

While solving the secret of the letter-writer is a big motivator for Nicky for most of the film, she eventually turns a corner, and Sweeney says she wanted to capture that peace and closure for the character. “I wanted her to get over it. I think it’s okay to not know,” she shares. “You move on with your life and the lesson she learned on the journey was about who she was and being okay with that, as opposed to feeling the need to be validated by someone from high school. And we had some fun with that.”

The film, written by Amyn Kaderali and Christine Conradt, reunites Sweeney with director David Weaver, who helmed Chronicle Mysteries: Vines That Bind. “He brings a lot to it in a way that it’s so fun. I really enjoyed working with David and I think he has a lot of wonderful ideas. The montage of Simone cleaning up the house before her mother-in-law arrived was one of my favorite moments in the movie,” she says.

“And there are just little moments like that that are such gems that I think people, when you’re watching it again, or when you think back on the movie, I hope that fun little things like that occur to you. He also was the one who thought of the opening credits with our childhood photos. Those are real photos from all of us. And I thought that was a really fun element. That was all David’s idea.”

Open By Christmas premieres Friday at 8 pm/7c on Hallmark Channel in the US and W Network in Canada. Here are a couple of sneak peeks.