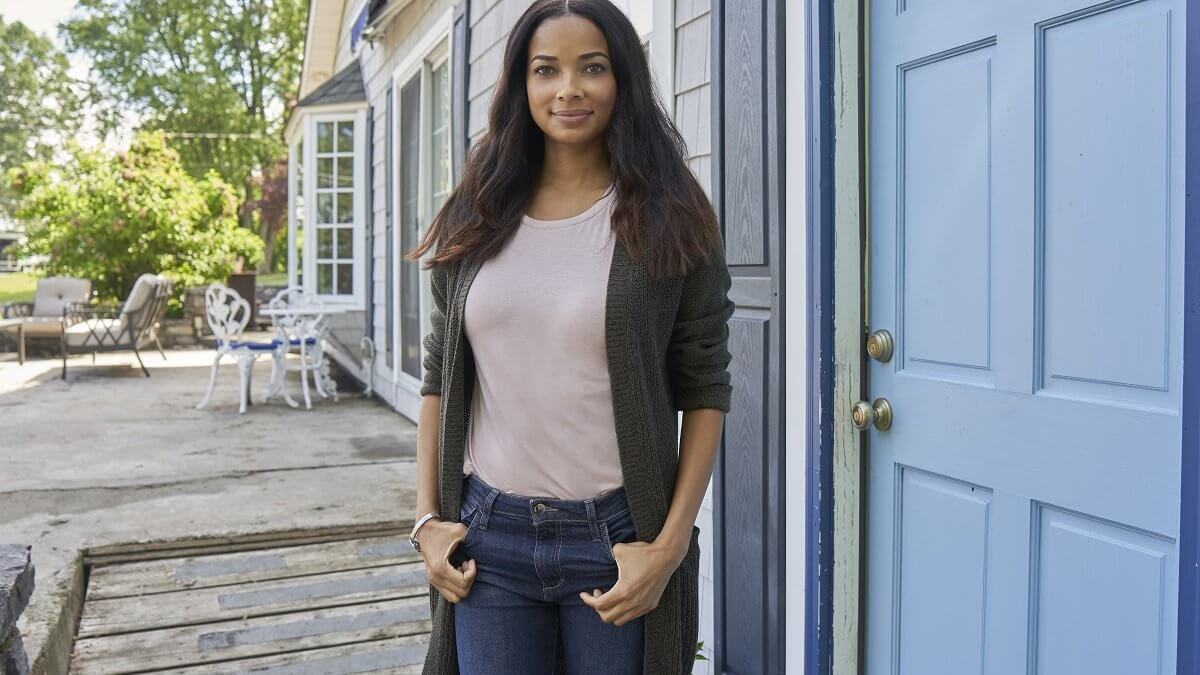 Sunday night on Hallmark Movies & Mysteries, Rochelle Aytes headlines a new mystery, Redemption in Cherry Springs, directed by Letia Clouson and written by Talia Gonzalez and John Bellina, about a journalist drawn into the murder case of an old friend. I spoke with Aytes this week about the new project, her second for the Hallmark family in the last year, following last Christmas’s A Christmas Tree Grows in Colorado.

Aytes’ character, Melanie, has returned to her hometown to settle her late mother’s estate and reconnect with her Uncle Joe (Frankie Faison). She’s also trying to shake off a story that rattled her and may have followed her to town.

That gets tabled when she’s pulled into a case where she has a history not just with the victim Tony (Rajiv Sharma), but also his widow, Rachel (Hanna-Lee Sakakibara), and their BFF, Diana (Hannah Barefoot), as well as many of the presumed suspects. Her inner circle also soon includes newly arrived detective and single dad, Jake (Keith Robinson), who begrudgingly recognizes her investigative talents.

Aytes enjoyed tapping into those relationship layers. “Melanie is an award-winning journalist for the Boston Chronicle and something happened during her time there and she needs to take some time to come back home and kind of regroup and also deal with the death of her mom. So she’s trying to handle that and consider selling her home and just be home and enjoy her friends. And then this mysterious disappearance happens with a childhood friend and at first she doesn’t want to get involved because of things that she’s carrying from her past,” she explains.

“She decides to just dive in, because she cares for and loves this person. And because she knows this town so well, and she’s so good at what she does, she has to help. And it’s interesting how it does unfold, where she’s just going from one to the next, then any clues she can find. She’s on top of the case. And I just admire the writing and the cleverness of Melanie. She’s just so smart and strong and brave.”

Aytes was also excited to work with Faison again. “He is awesome. I love Frankie so much. This is my third time working with him, actually,” she shares. “The first time I didn’t really know him. I did a movie called White Chicks that he was also in and we had no scenes together.”

“The the next time I worked with him was last year. We worked on a pilot together [for] The Lost Boys for CW and he played my father and then I got to see him again on this. I was so excited when I saw his picture up [in the production office] that I get to work with him and he played my uncle. Frankie is so sweet and funny and just so good. His wife owns a bakery and she brought some of her baked goods and pies to set a few times.”

While many of the Hallmark projects are filmed in Canada, this one shot in New York state. “I’m from New York City. And so I was so excited to be able to go back for a little while, but I’d never been upstate there in the Hudson Valley,” Aytes shares.

“And it was just amazing, so beautiful and peaceful,” she recalls. “And we filmed on the water one day. The people out there were just so sweet and kind and it had small town feel. We definitely captured that. That was one thing that was just so beautiful.”

“I have a girlfriend I grew up with who lives in New York. And I remember when I first started acting, she said to me, ‘You should do a Hallmark movie.’ And she reminded me of that when I did [A Christmas Tree Grows in Colorado]. She was like, ‘Yes! You made it!'”

Next up in the queue, Aytes has completed The Men in My Life, a passion project that’s not yet slated for release, so stay tuned on that. “That’s been in the making quite some time. I’m not really sure where it is in the release process,” she says. “That came about with me just wanting to take charge of my own life and create something of my own.”

“So I teamed up with my manager and he had a writer come in and he wrote my story about a particular time in my life with my mother and my father. And so it’s really personal to me and it was really cathartic to film it. And now my parents have passed, but I can look back on [that time in my life] and say, ‘You know, I did that.'”

Redemption in Cherry Springs premieres Sunday night at 9pm/8c on Hallmark Movies & Mysteries and Aytes is hosting some of her cast mates for a watch party and does expect to live Tweet. Here’s a sneak peek.