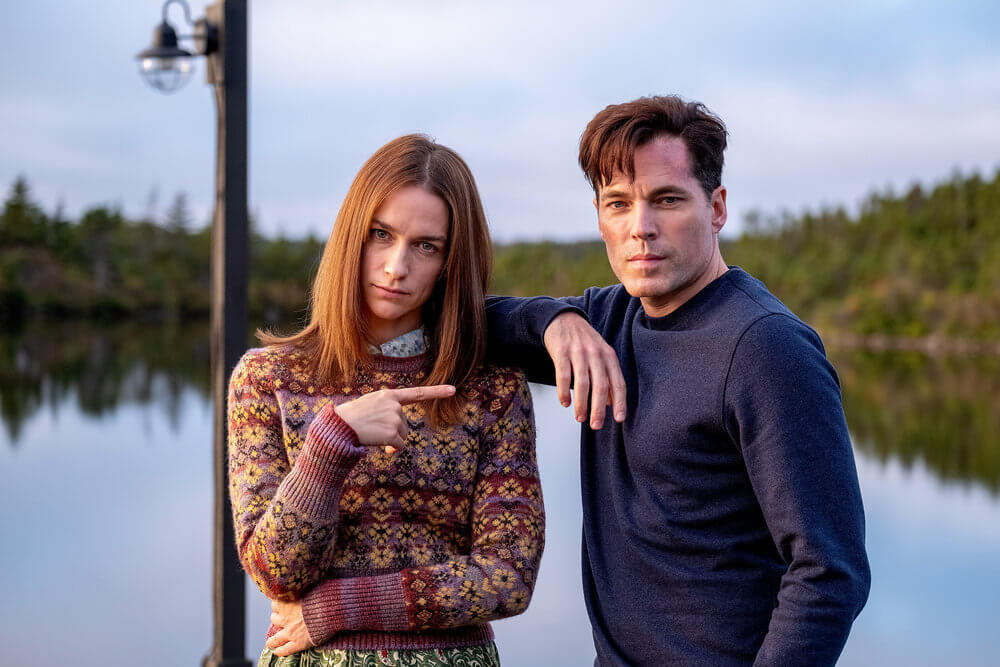 SurrealEstate is all new this Friday, and you can catch the first six episodes streaming now on Syfy and CTV Sci-Fi. I’ll have a preview of the episode tomorrow. But first, in the next part of my chat with showrunner and series creator George R. Olson and series star Tim Rozon, they discuss having Melanie Scrofano join them,, first as a guest star and then twice as a director.

Olson said the guest star slot arose after she was mentioned as a potential director. “She has a great relationship with the network and our cast and everybody knows her as Wynonna, where she also directed. They were terrific episodes. When they told me that she was interested in directing a couple of episodes, I [asked] if we could get her to guest in something also,” he recalls.

“That’s an awful lot because if she’s guesting in something while she’s supposed to be directing…she was a very, very busy woman. It worked out really great because in her guest spot [in “For Sale By Owner“], she got to know the crew and meet everyone and fit in. And so when she stepped into the directing, which was right after, she already had this relationship.”

“[And] she had a feel for that goofy, weird, elusive tone that we had kind of created. She just stepped into it with such grace and such confidence. One of the things that’s really great about her as a director, she really picks her fights. She decides on those moments that she wants to take the time with, and then she crafts her day around making sure that she has time for them, like that magical moment [in “Ft. Ghost Child”], where we pan across all of our people as George is going to sleep, and then we pan back and he’s gone.”

“We have the time to make sure that we get those moments and get them right. And that’s all Mel and not only her beautiful, soulful direction, but also her pragmatic arrangement of the day to make sure that we get there, that we don’t spend time on things that don’t matter. And that means, at the end of the day, we have time to spend on those moments that live with you a long, long time.”

For Rozon, having Scrofano back as a co-star and director was old home week. “It was so great because we just picked up [where we left off]. Different characters…it didn’t matter. Working with Mel, for me, is easy…I don’t want to say easy because it’s never easy. I don’t take it for granted, but it’s easy because I just connect with her. That’s the secret. Don’t disconnect,” he explains.

“If you disconnect, you’re in trouble. There’s so many things you’re going to lose. So I just never disconnect from playing off of her. That’s what I do. I just connect to Mel and I don’t let go. And I did the same thing with Luke. I’m going to be Luke connecting to this character.”

“We did the acting part first and the crew immediately fell in love with her. She’s so great as an actress and so great on set and then when she jumped into the director’s chair, everybody was already excited. I’m super proud of her. She’s doing her thing. In many ways, she probably directed me less because it’s me and she had so many responsibilities and [other] things to do. But it’s always incredible to just see her behind the camera and being Mel.”

SurrealEstate airs Fridays at 10 pm/9c on Syfy in the US and CTV Sci-Fi in Canada. The first six episodes are now streaming on the networks’ websites, and you can catch our previews and interviews with Tim Rozon, Tennille Read, and showrunner George R. Olson here. Check back tomorrow for Friday’s preview.