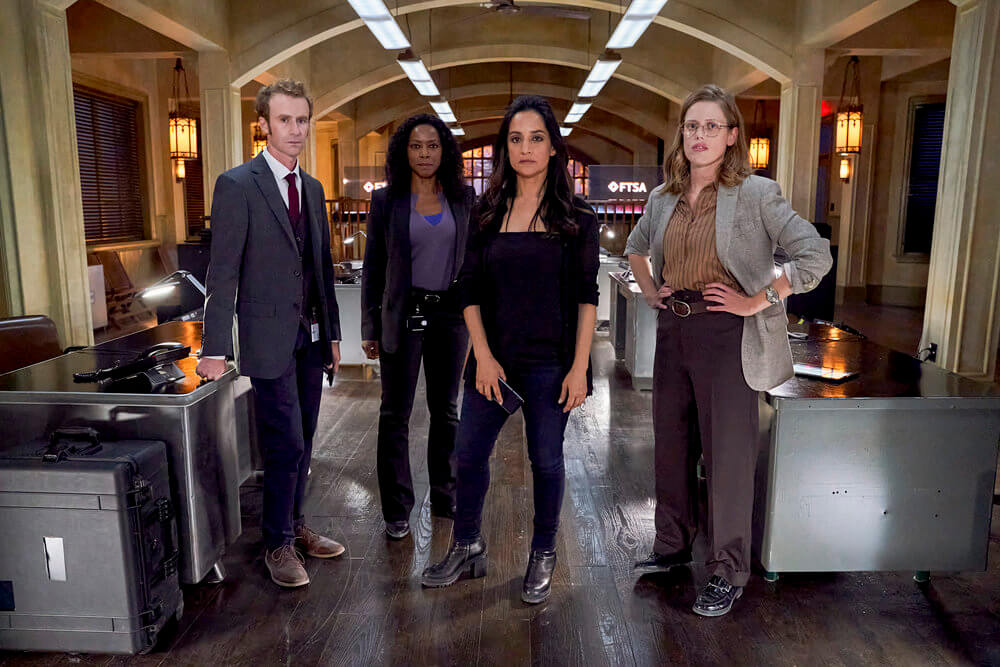 Peacock quietly released all six episodes of the second season of Departure last week–so quietly that I missed it until I went to look for screeners because I thought it must be coming soon. Archie Panjabi, Kris Holden-Ried, Mark Rendall, and Christopher Plummer (in what I believe was his last role) return from Season 1 for a new mystery that takes the FTSA team stateside to investigate the crash of a high-speed train derailment on its way from Toronto to Chicago.

A delicious who’s who of #CdnTV favorites join the cast, including:

Similar to the first season, the action follows Kendra (Panjabi) and her team as they unravel the cause of an accident that’s not as straightforward as it may seem, only this time, she’s not on her own turf, and there are multiple jurisdictions and agencies involved. She also has to deal with check-ins from Plummer’s Howard, with whom things are still fractious after last season. Thankfully, they do get to a point of closure, and it’s lovely to see Plummer again. Filmed during COVID quarantine protocols that kept Plummer in the US, Howard isn’t physically with the team, but we do get full scenes of him that are resonant and more than a remote FaceTime capture.

It’s a solid, quick watch, with a lot of moving pieces on the procedural front and personally for the team. Since I’m a sucker for the cast and the Canadians behind the scenes,, too, I very much enjoyed it. Series creator Vincent Shiao was a Killjoys script coordinator in its first season, director T.J. Scott, who helms all of the season, has also directed a ton of Canadian and US series ,writer-producer Nikolijne Troubetzkoy wrote for Killjoys, writer-producer Marsha Greene wrote for Coroner and Mary Kills People, and writer-producer John Krizanc has been writing for Canadian TV since Due South. Not many shows can get all of these people together, and I legit kept nerding out about it.

Season 2 of Departure is out now on Peacock. Season 1 and the first episode of Season 2 are free and the remaining five episode of Season 2 are available through a Premium subscription. In Canada, the series will air weekly on Global TV this fall. Here’s a sneak peek. Pro tip–watch the previouslies when you stream it–there are random snippets of dialogue that are not in the previous episodes.