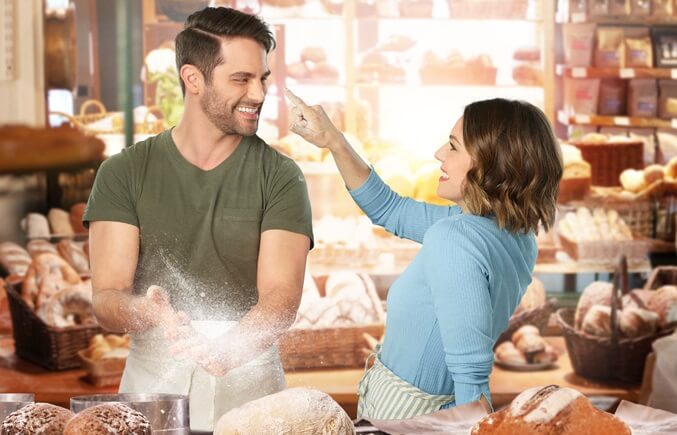 Eloise Mumford returns to Hallmark Saturday night for the first time since 2018’s ultra-charming holiday favorite, A Veteran’s Christmas for The Baker’s Son, which reteams her with that earlier film’s director, Mark Jean. In the new film, she co-stars with Brant Daugherty (Timeless Love and Mingle All the Way) in a tale of besotted BFFs set against a quaint seaside town that’s turned on its ear by a batch of bread that revitalizes the tourist season.

Mumford plays Annie, who now owns her family restaurant, a role she fell into years earlier when she returned home from a painting fellowship in Paris to help out her parents. Feeding the muse by painting the cove comings and goings by sunrise every morning, she otherwise shelved her passion, seemingly without regret. Annie’s BFF Matt (Daugherty) is the titular baker’s son, who’s mediocre at best in the kitchen, but doing well enough to sustain the family bakery with his dad (familiar Hallmarkie Serge Houde).

All that changes when he spots an incoming ballet company and their prima ballerina, Nicole (Maude Green), who knocks him for a loop. After that and separate heart-to-hearts with his dad and Annie about not having a passion of his own, his fortunes change and he delivers an extraordinary batch of bread. It fortunately coincides with the arrival of a local Seattle TV station to cover the ballet company. One bite, and several loaves later, the newsman puts the village back on the map and it’s suddenly inundated with people keen to taste the bread.

While the town bustles–as do a who’s who of Hallmarkies (Brenda Crichlow, Haig Sutherland, Eric Keenleyside, Doron Bell, and Nathaniel Arcand) playing the local ballet benefactress, mayor, pub owner, fishing tour guide, and police captain–Matt and Annie’s once-easy vibe takes a hit. When he’s not baking, he’s wooing Nicole and Annie pairs off with the choreographer, Philip (Oliver Rice). Annie’s other BFF, Mary (Elysia Rotaru) can’t understand why they’re dating other people instead of each other.

It takes a little time, and a turn of the baking magic for them to wonder that, too. It’s a fun watch, and at times, deeply silly in the best way. Mumford has been select in the films she’s done for the network, and this is her first non-holiday movie for them. Aside from A Veteran’s Christmas, her other titles are 2012’s Christmas with Holly, also with Sean Faris, and 2015’s Just in Time for Christmas.

I hope this is the beginning of more Hallmark work for her if she wants it. She’s very good here as the more emotional of the friends, especially as the penny drops for Annie first. Daugherty plays the lighter of the pair, and together they’re very believable as lifelong friends with a finish-each-other’s-sentences history. Jean directs a script by Steve Peterman and Gary Dontzig (veteran TV writers back to Murphy Brown and Suddenly Susan in their first Hallmark script).

The Baker’s Son premieres Saturday at 9 pm/8c on Hallmark Channel. Here are a couple of sneak peeks.

Haven Preview: “Reunion/Thanks for the Memories”