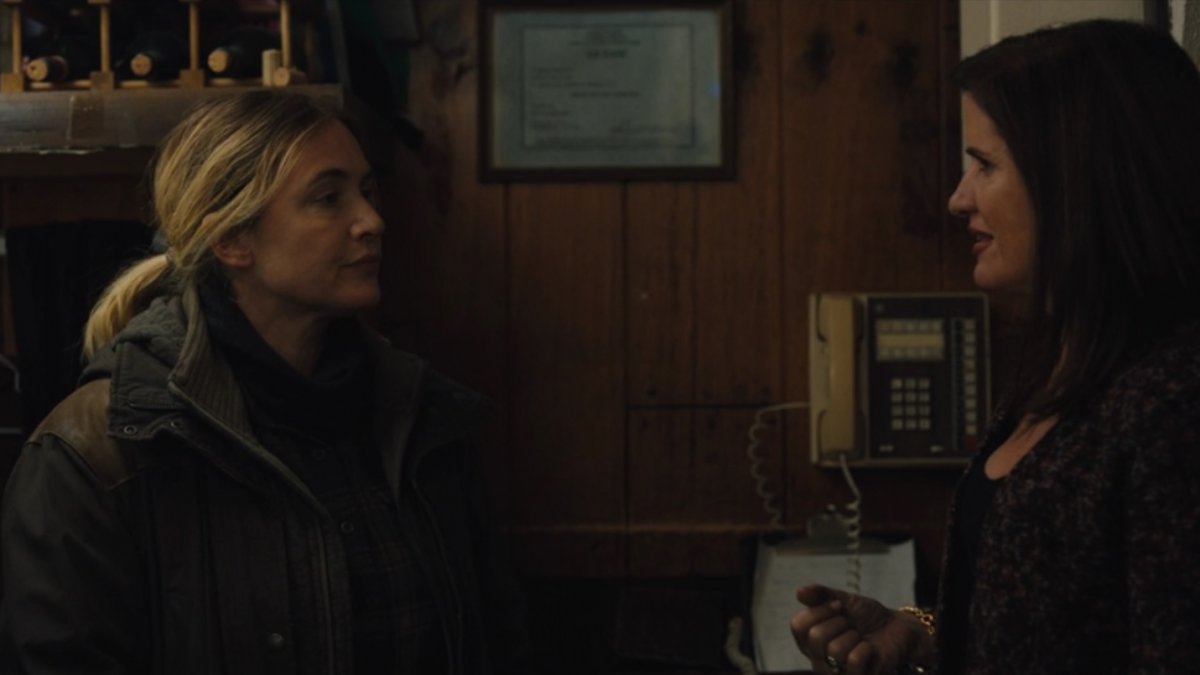 Mare of Easttown wraps this Sunday, with one mystery solved and another still lingering. One piece of that second puzzle–the murder of Erin McMenamin–lies with Brianna Rasso, who laid a beating on Erin the night she died. The current girlfriend of Erin’s baby daddy, Dylan, she’s also now come forward with new information on Dylan’s behavior later that evening. Brianna’s mom, Patty, is an old high school classmate of Mare, who’s investigating the murder, and their relationship is one of the many complicated relationships in the small town. We caught up with Connie Giordano, who plays Patty, for an e-mail Q & A about working on the show.

Giordano was right at home on the show. “I grew up in the area, I still have family in Delaware County, so it really wasn’t a stretch for me. I think anyone would find it challenging with a conflict of interest like that, where your high school friend is also investigating your daughter,” she says.

“With such a tight-knit community, there’s bound to be tensions among everyone in the neighborhood, and that’s what we see in the story. Kudos to Brad Inglesby, the writer…that’s great writing.”

The entire series was directed by Craig Zobel and Giordano says that made the experience more like shooting a movie. “It felt like a film because we did not shoot in order. It was still a great experience,” she shares. “You just focus on the task in front of you. [Zobel] was wonderful to work with. He’s so approachable, and very specific, which is ideal.”

Giordano was excited to work with such a powerhouse cast that includes Kate Winslet and Jean Smart. “Kate and Jean were just lovely. Kate is so professional but also has a wonderful wit, and she is so down to earth. Jean is wonderful. I told her, she’ll always be ‘Charlene’ (from Designing Women) to me,” she says.

Giordano shared a powerful scene with Smart in episode two when Patty’s husband confronts Mare at her home and Patty and Helen try to intervene. “[It] was a bit longer. In the original, I had a long walk up the driveway and into the house. The editor had other ideas, but it worked,” she recalls.

The series was one of the many that had its production interrupted by the pandemic, and Giordano was grateful they were able to resume and complete the season. “Most of us just hoped and prayed we’d finish [when] so many shows did not return,” she shares. “We had done a lot of work before COVID-19, so I was so grateful and excited that we got to finish.”

Giordano is an accomplished stage actress and loved switching gears to TV. “Stage is much different. Filmmaking is very technical and the storytelling is broken up for the actor, whereas, stage acting is telling a story in one shot,” she explains. “They’re both unique and I love them all! I’ve been on stage for many years, and I’m ready to tackle more film and television!”

Mare of Easttown airs its finale this Sunday at 10 pm ET on HBO and HBO Max, where you can catch up on the first six episodes. You can watch the first episode for free  Here’s a sneak peek of the finale.