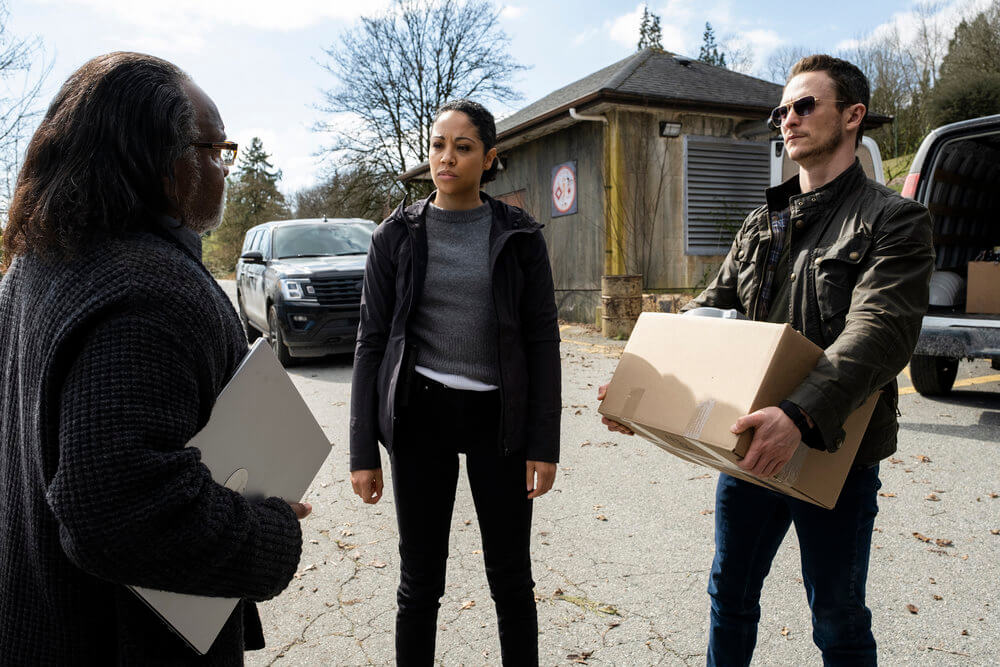 First things first — NBC announced its new lineup and Debris wasn’t on it, BUT they are keeping an open mind about all their “bubble” shows and it sounds like they want to see how the season ends for them before making a renewal call. It’s also important to note that even if NBC bounces it from the linear network, they still have a streaming network in Peacock and the larger NBC Universal conglomerate includes USA and Syfy, so it could return somewhere else. That said, WATCH THIS SHOW AND TELL YOUR FRIENDS. Ahem.

In the penultimate season 1 episode, we get a bottle show of sorts as most of the action takes place inside Orbital after debris stars randomly lining up and chucking itself through a wormhole in the basement. It’s also mind frakking a selection of lab employees.

Before we get to that, Finola and Bryan get George settled in at the satellite/antenna array, where he shares that he’s regained more of his memory about what he was working on. He presses on when they’re recalled to headquarters.

Once they’re back at Orbital, they try to stop the debris from jumping while also trying to save the lives of the techs, who seem to be tethered to it the same way Bryan was tethered to Mariel last week. They also find out that Oribital has been tinkering with the debris in a way George never intended, which gives Finola some insight into why he was driven to suicide.

Separately, Maddox is still trying to secure that piece of debris from the black market and Ash is plotting his next move. Finola gets a surreptitious assist from her dad while Bryan has an awakening that leaves him hilariously blissed out. When they compare notes, it’s his turn to convince her what he believes in, which is closer to where she began the season.

There are a lot of moving pieces (no pun intended) for an hour that’s setting up a finale, which makes me wonder how final that finale might be. Brad Anderson directs a script by Glen Whitman and Kyle Lierman.