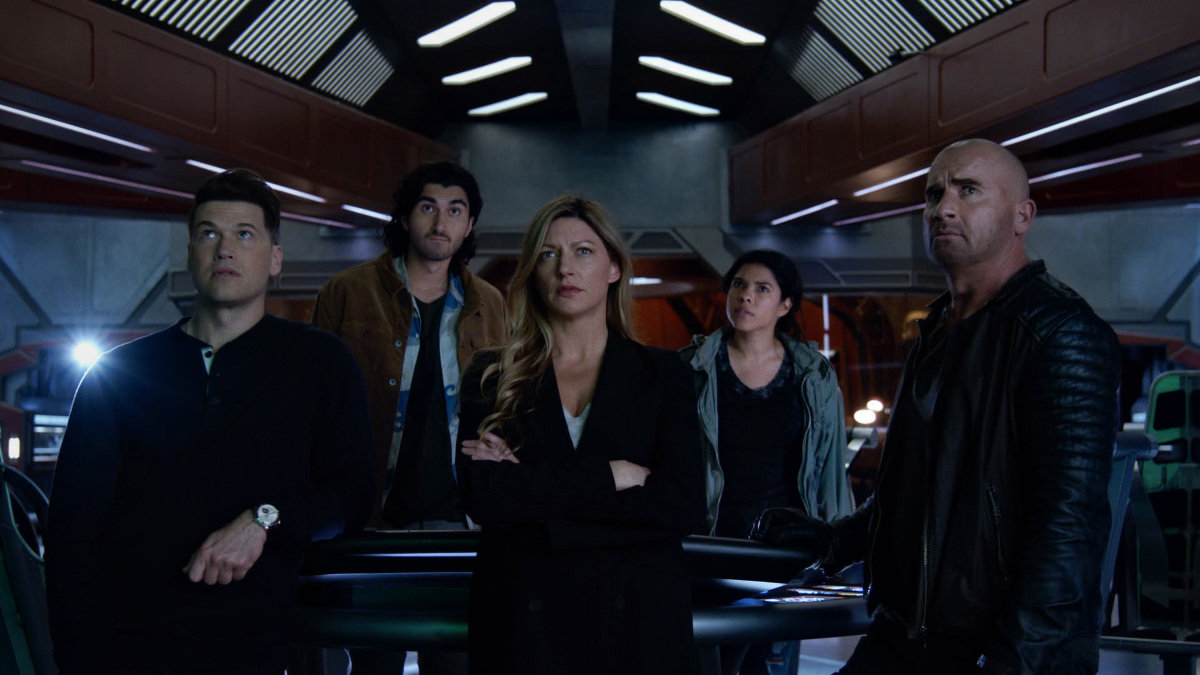 WARNING: Spoilers for the sixth season premiere of DC’s Legends of Tomorrow

What’s easily the CW’s most fun series flies back onto screens tonight. The season six premiere of DC’s Legends of Tomorrow largely deals with what happened to Sara Lance, who mysteriously beamed up into the great big sky in the season five finale.

But before we preview the brand new episode, let’s reflect on adventures from the recent past (well, 11 months ago). When last we saw our favorite TV time travelers: Charlie aka one of The Fates, left the gang in favor of settling down and having a life (so sad to say goodbye to cast member Maisie Richardson-Sellers). There were two Zaris (Tala Ashe) for the price of one. At least until Zari #1 decided to head back to the Totem in order for Behrad to remain in the present timeline. And, Sara disappeared unbeknownst to her trusty crew.

In “Ground Control to Sara Lance,” the Waverider gang realizes they’ve got a missing crew member on their hands. And, yes, the title of the episode is a little bit of a spoiler in itself.

A MISSING CAPTAIN – After a night of celebrating their beating the Fates, the Legends quickly discover that Sara (Caity Lotz) is missing. Trying to keep it together, the Legends are shocked to discover that she was taken by Aliens. Ava (Jes Macallan) sends Rory (Dominic Purcell) and Behrad (Shayan Sobhian) to follow a lead on who can possibly help them find Sara, while Constantine (Matt Ryan) tries to work his magic. Meanwhile, Sara does all she can to try to escape, which includes releasing Aliens into the timeline, but is shocked to learn who one of her kidnappers turns out to be. Nick Zano, Tala Ashe, Olivia Swann, Adam Tsekham and Lisseth Chavez also star. Kevin Mock directed the episode written by James Eagan & Mark Bruner

Things pick up right after the events of last year’s season ender. Get ready for surprises, new characters and a lot of things we’ve come to expect from this show: action, humor, over-the-top moments, historical figures, heartfelt and emotional scenes; sexual tension (between Zari 2 and John Constantine). This is all wrapped up in the show’s requisite zaniness. After all, as is stated in the synopsis, aliens took Sara, so there’s that.

As for more character-driven happenings, Nick is licking his wounds after losing his Zari. Astra is presented and accounted for as is Mick’s daughter, Lita. Ava tries really hard not to be a wreck in the wake of Sara’s kidnapping. Can she hold her you-know-what together?

At the end of it all, the Legends crew have a new purpose, a new mess to clean up. Just like clockwork, right?

Line of Dialogue to look forward to:

“Being an avenger is stupid. The goal is to prevent death. I am a Preventer.”

The CW’s official synopsis of what to expect this coming season:

Having spent last season trying to track down the Loom of Fate in order to bring back their slain comrades and save the world from mind control, the Legends must now save history from a foe like none they’ve encountered in the past or future. Co-captains of the time-ship Waverider Sara Lance (Caity Lotz) and Ava Sharpe (Jes Macallan) have dealt with monsters, time anomalies, and most recently, villains from Hell, but this season they will face something even more challenging and bizarre … space aliens!

After one of their own is abducted by a ruthless alien, this new mission becomes personal. Fighting against aliens in the timeline while also working to bring back their missing team mate, it will take more than the combined powers of a dark magician, John Constantine (Matt Ryan); a semi-reformed arsonist and Waverider O.G., Mick Rory (Dominic Purcell); a historian who transforms into steel, Nate Heywood (Nick Zano); a fresh out of Hell Astra Logue (Olivia Swann); and a brother-sister air-totem-wielding duo, Zara Tarazi (Tala Ashe) and Behrad Tarazi (Shayan Sobhian) to save the world (and beyond) for a sixth time.

They must recruit a new Legend, a gun-totin’ Texan named Spooner (Lisseth Chavez) who was abducted by aliens when she was a child and imbued with powers that will help the team defeat their intergalactic foes. Either that or she’s just crazy.

The new season of DC’s Legends of Tomorrow kicks off tonight at 8/7c on the CW.

Debris Preview: "I Am Icarus"