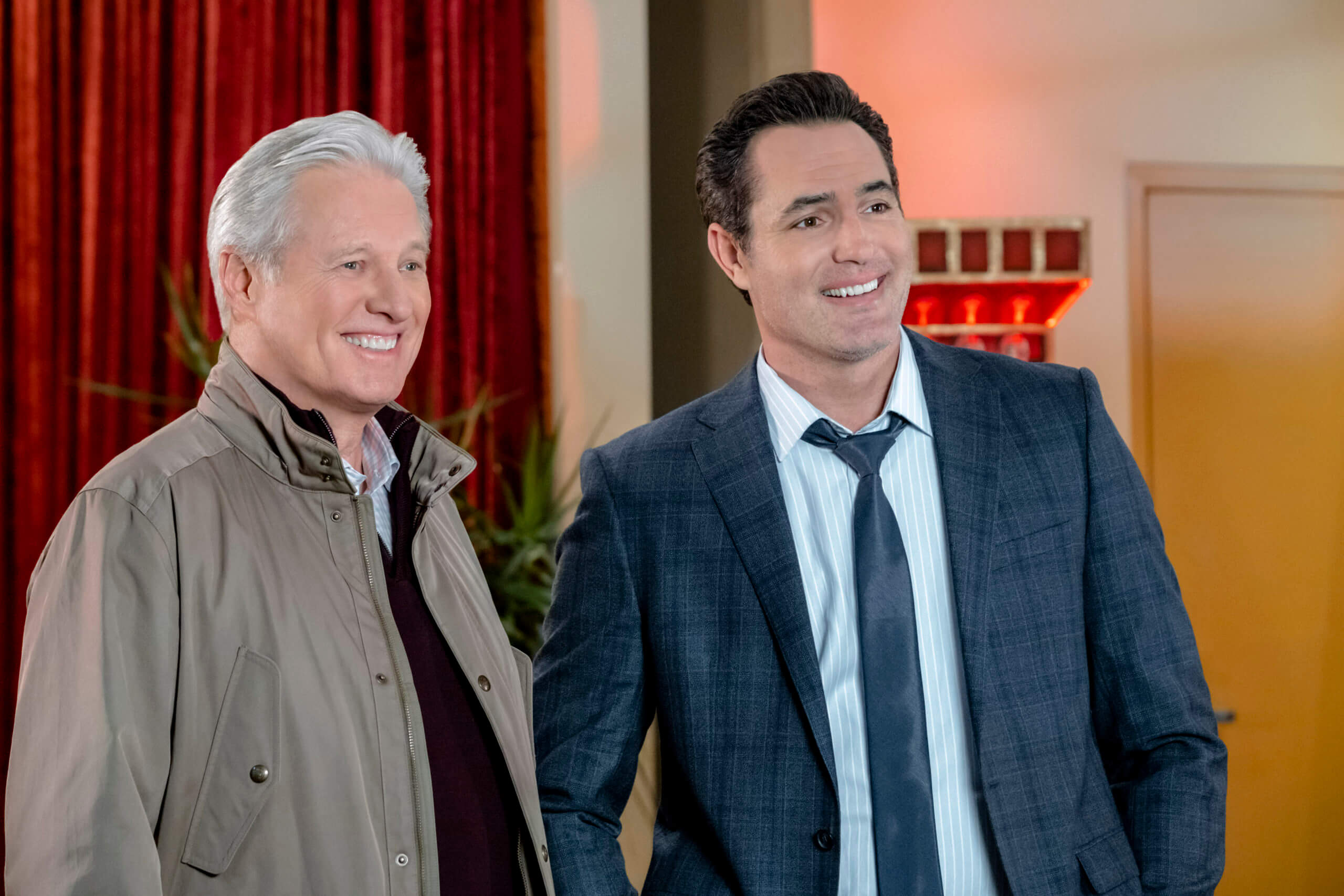 We can all agree that pandemic time moves differently, and in what I was sure was about the fifth installment but is actually only the third, Matchmaker Mysteries returns to Hallmark Movies & Mysteries Sunday night with The Art of the Kill. Danica McKellar, Victor Webster, and Bruce Boxleitner are back as matchmaker/amateur detective Angie Love, actual detective Kyle Carter, and retired detective/Angie’s dad, Nick Columba. I chatted with Webster this afternoon about the new movie.

This time around, Nick is the unwitting instigator of bringing Angie into another crime scene when his private investigative work looking for a petty criminal at a university art gallery turns into a murder investigation instead. That of course brings Kyle in, and then the gang’s all here.

The victim is a well-regarded archaeologist, who’s poisoned, and there are no shortage of suspects, from the gallery curator, Lucia (Aliyah O’Brien) to the victim’s assistant, Myra (Alisha-Marie Ahamed) to his estranged sister, Natalie (Jane McGregor), to the grad student, Derrick (The Order’s Jedidiah Goodacre). It’s positively Agatha Christie!

And then to keep the romance thread alive, Angie and Kyle are flirty and Angie’s producer/BFF, Paige (Cory Lee), keeps getting a case of the awkwards around Officer Smith (Andrew Dunbar). So there’s a little something for everyone.

Webster loved getting back to work on the latest film, which shot in Vancouver just two months ago, and the expansion with this film to more of an ensemble with Nick back out in the field. “It feels like we’ve done more than three. I don’t know if it’s just because it’s such a great working environment. It’s a great set. Hallmark is so great. They’re a well-oiled machine. They know how to do what they do. They do it really, really, really well and they do it really fast. They’re fantastic,” he shares.

“Danica and I get along really, really well. The producers are all so amazing and kind and thoughtful. It feels like going back to a family. Bruce is such a talented actor and such a great human being. It’s nice to see him get a lot more involved and get his own storyline, and to utilize his talents a lot more. I love that. I think that’s such a great dynamic to bring into the whole story.”

“I’m [also] really enjoying seeing the introduction of new characters and storylines and plot. It makes everything a lot more colorful and a lot more interesting. There’s a big world that could be explored, moving forward and I think it would be a lot of fun to do it.”

This film, directed by Catherine Cyran and written by Dave Thomas and Marcy Holland, is considerably lighter in tone, with the Angie and Kyle banter in full swing. The trailer (embedded below) is accurate for the vibe of the whole movie. Murder aside, it’s a fun watch, and Webster enjoyed that energy. “Kyle is very amused by Angela. He knows now at this point that she is very smart and very capable. He is not going to let her know that, though,” he laughs.

“Part of the fun-loving side of Kyle is to kind of mess with her a little bit, like Moonlighting. I love that about the character. And I love that about this script in particular. That’s one of the things that I’ve been hearing most as far as the feedback, just on the trailer. Fans are loving how much humor’s involved.”

At the end of the day, these are mystery movies, and Webster appreciates the subterfuge of following the various threads as the case is solved, and that it brings an extra layer to the Angie/Kyle dynamic. “One of the things that I love and that I hear that people love is that they get to try and solve the crime along with us,” he explains.

“And they do such a good job at misleading us that it’s not an easy thing to do.There are so many misleads in this movie. Any number of people could have been [the killer]. There are so many little plot twists.”

No word yet on a fourth film, but Webster is hopeful. For now, he’s back home in Los Angeles. Next month, he’ll join fiance Shantel Van Santen in her annual campaign to raise money for the American Lung Association. VanSanten lost her nonsmoking grandmother to lung cancer from Radon poisoning seven years ago and the actress and activist uses her million-strong-follower social media muscle to help create awareness.

On May 1st and 2nd, the couple will be climbing the mountains around Los Angeles in the #FightForAirClimb. You can get all the details on how to donate to VanSanten’s Team DD, named for her beloved grandma Doris, and follow along live on Instagram here.

Matchmaker Mysteries: The Art of The Kill premieres Sunday at 8 pm/7c on Hallmark Movies and Mysteries. Here’s a sneak peek.