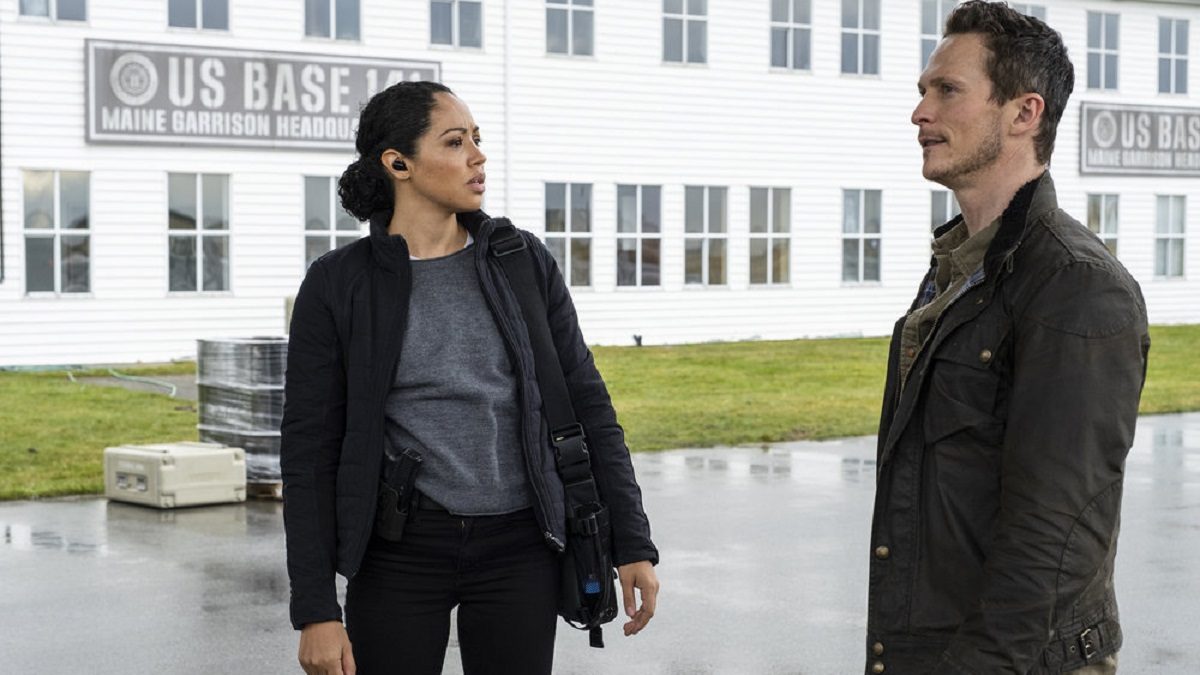 Last week’s Debris didn’t have a screener ahead of time, so I watched it live, and in the episode, the team ran into a case where a couple who discovered the debris had good intentions to turn back the clock with it, but it took a few trial and error deaths to get there. It was a little bit reminiscent of an old Outer Limits episode called “Paradise” (which was on Hulu til recently). If you missed it, “Supernova,” is now streaming on Peacock. It also marked a heartfelt confession scene between the partners about Finola’s dad and revealed that Bryan’s being regularly inoculated against something. This week, Finola and Bryan are called to a case near a military base in Maine after CCTV captures a suicide and package handoff that look suspiciously debris-induced.

The case hits close to home for Bryan, who connects on a personal level with the victim’s brother, Luke, a fellow veteran. Bryan recognizes a kinship with him that makes for some really nice scene work between Jonathan Tucker and Virgin River‘s Benjamin Hollingsworth and gives us some more insight on Bryan’s loyalty to Maddox. The titular Caroline (Evelyn Burke) in the episode is the victim’s young daughter, who has her own special connection with the debris.

The closer Finola and Bryan get to figuring things out, the more the debris responds, masking reality and making them lose time to stay hidden. Fortunately, their moments of lucidity help them prevent a bigger event. Back in DC, Maddox is itching to interrogate Ames and finally gets the chance in a scene that I had to fast forward through. It gets him what he needs to know, based on a call he makes to Bryan at the end of the hour.

In England, Finola’s sister reaches out again with an awkward phone call that conveys more information than it might seem. It’s another solid episode, written by Samantha Corbin-Miller and Tracy Bellomo and directed by Tim Southam. I’m not sure if we’re getting 10 or 13 episodes, but with this one, we’re up to episode seven so far.

I’m really liking the growing relationship between Finola and Bryan, especially now that they’ve put everything on the table with each other. And I appreciate that the cases continue to have a humanistic component that keeps them grounded to the people involved and each other. The torture porny thing was a surprise and I’m perfectly fine if that’s a one-off for the season.

Debris airs Monday at 10 pm/9c on NBC and then is available on NBC.com and streaming Tuesdays on Peacock. Here’s a sneak peek.