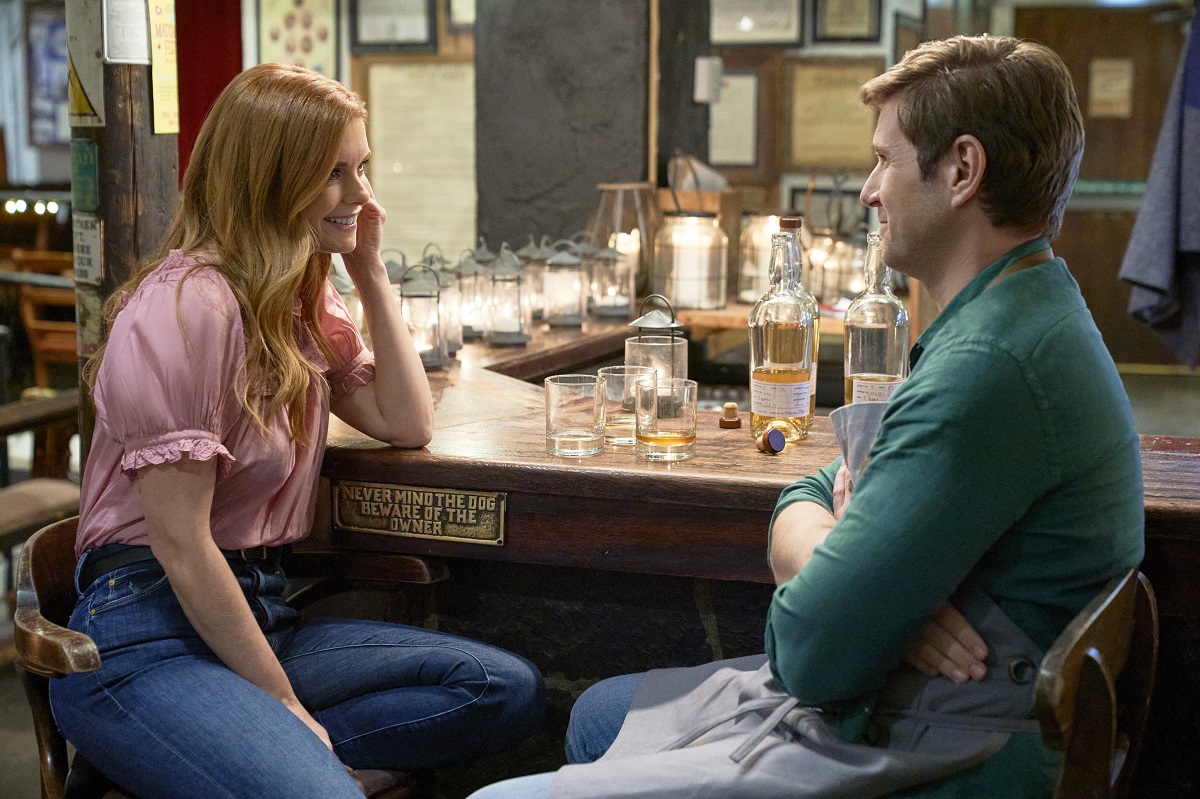 Hallmark Channel jets across the Atlantic this weekend for an Irish Spring [hee] Fling entry with the Saturday night premiere of As Luck Would Have It. Making their network debuts, JoAnna Garcia Swisher and Allan Leech co-star as Lindsey, a New York hotel acquisitions specialist sent to Ireland to scout a potential site, and Brennan, the de facto guardian of the castle that sits on the property.

Lindsey arrives in the tiny town prepared to dazzle its council with her plans, but she’s immediately rebuffed before she can even begin. Instead of heading home, she decides to dig in and spend the week getting to know the village and its people by participating in its annual matchmaking festival.

Initially a bit of a ruse to show she’s invested in them so they’ll hear her out, she (spoiler alert) instead falls in with a trio of friends from Down Under (Aoife Fitzpatrick, Emma Dargan-Reid, Juliette Crosbie) and then head over heels for the quaint community and a certain charming council member.

There’s a family history tie, too, that makes her reticent to follow through on her initial mission. Once she sees all the town has to offer, and how important the castle is, she rallies the troops for an alternate proposal in the hopes she can maybe have her cake and eat it, too. It’s also a wake up call about the career she accidentally fell into after college and just sort of went with. In the process, she also wakes Brennan up about his own path.

It’s a very sweet and gentle film, and even when the townspeople try to freeze Lindsey out or torpedo her participation in the festival’s events, they’re not biting in the way they go about. And then they fall for her as much as she does them. Director Clare Niederpruem, who helmed Love in Iceland, again expertly captures the beauty and spirit of a country and its people, this time in a script by Christine Conradt and Audrey Shulman.

Post-pandemic, the movie might be inspiring some Irish travel. It reminded me a little bit of Honeymoon for One, another Irish-set Hallmark Channel film that’s one of my favorites and similarly-themed.

I’m glad Garcia, who’s a veteran of series, including Netflix’s Sweet Magnolias, which is filming Season 2 now, got to come play. And Leech is know to most for Downtown Abbey, but I know him for the much grittier Bellevue, so it’s a nice switch to see him play someone softer here. They have a fantastic chemistry as two characters who have every reason to be antagonistic with each other, but make the choice to be adult about it, recognizing that it’s so much easier, and richer, to be human and kind instead. I really liked it.

As Luck Would Have It premieres Saturday at 9 pm/8c on Hallmark Channel. Here are a couple of sneak peeks.

Covert Affairs Preview: “Starlings of the Slipstream” [VIDEO and PHOTOS]