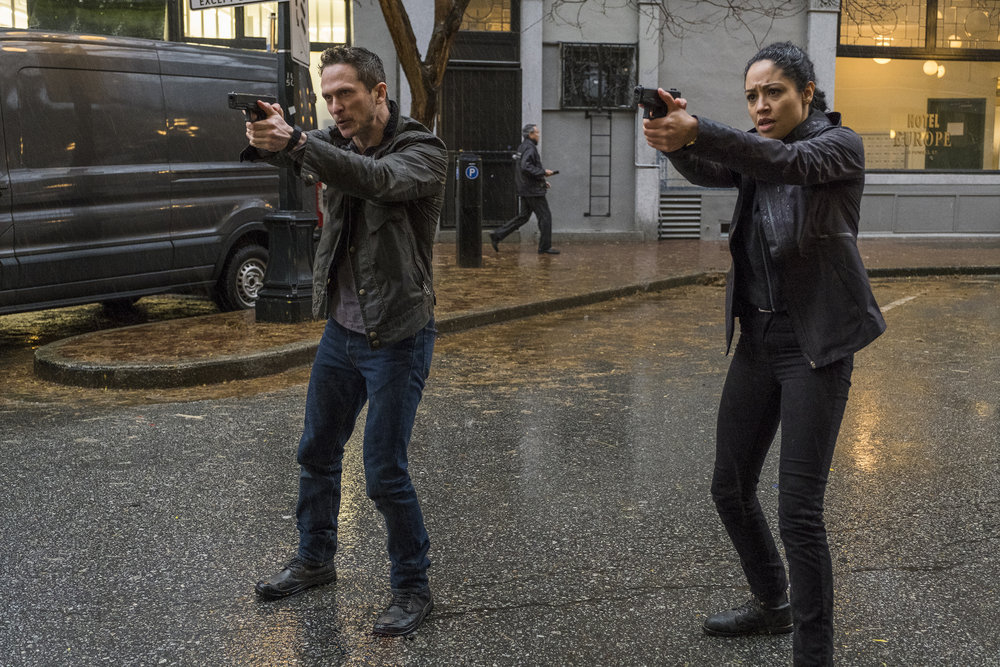 Monday, on a new Debris, the Oribital team finds out their debris scavengers headed by Scroobius Pip‘s Ash (who are IDd as Influx) are not above inciting mass casualty events to test their merchandise. They start with a bus full of passengers and then graduate to downtown Manhattan where it becomes a race against the clock.

From the outset, “Earthshine” is tonally a bit more dark than the episodes that have preceded it, with much higher potential stakes, and it also marks a pronounced shift in the more collegial friendliness between Finola and Bryan. She’s still bristling from their disagreement at the end of the last episode, and the news from Priya about her dad. Bryan knows he’s upset their balance, but he’s only half right on the why.

Priya realizes she may have torpedoed their working relationship, so she tries to adjust the temperature by reminding Finola that they also have their secrets. That helps a little, but Finola’s also balancing her renewed connection to her sister, who surfaces again, this time with childhood memories that come flooding back.

As for the case and that sprint to stop Influx before they do even more damage, it serves to split Bryan, who ends up counting down an actual clock while triaging an injured Kazemi, and Finola, into separate teams. And they’re joined in the field for the first time by Maddox. He’s all too happy to jump in, given more clues about his home life that indicate he’s still trying to make amends for something, but he’s drawing the line at a new ask from his wife that would ostensibly serve their son while unsettling his job.

The episode is directed by Rebecca Rodriguez and written by Tracy Bellomo and Tiffany Shaw. This week’s fun HITG guest stars are Sebastian Roché as a mysterious courier and Ben Cotton as Ash’s technician in charge of detonating the experiment who has concerns about toeing the all-or-nothing party line.

Debris airs Monday at 10 pm/9c on NBC and then is available on NBC.com and streaming free Tuesdays on Peacock. Here’s a sneak peek