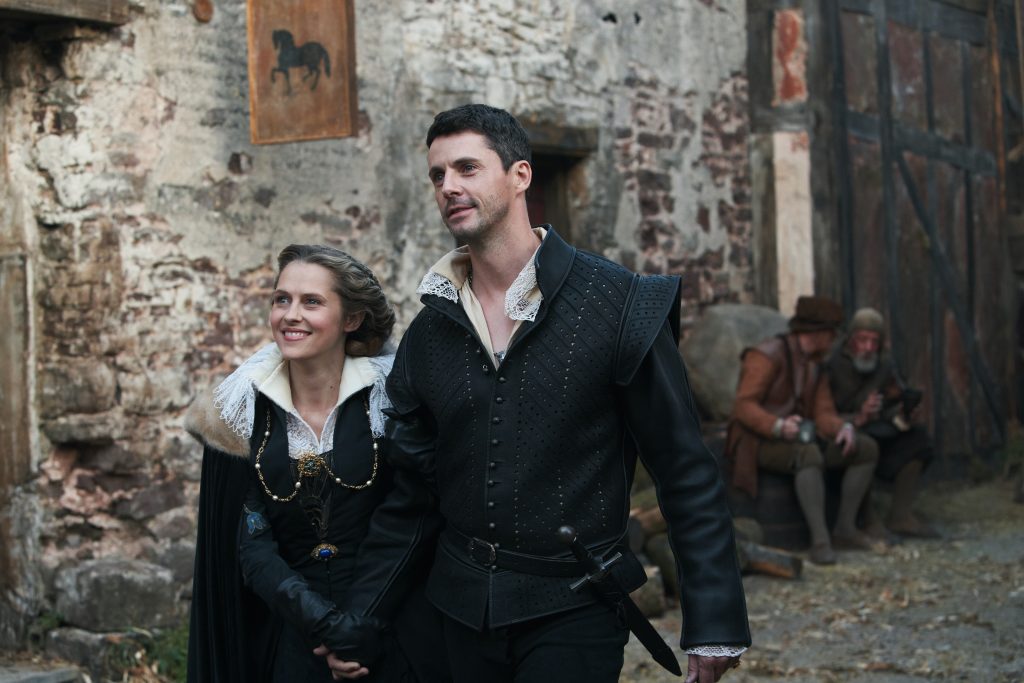 Hello, my pretties! A Discovery of Witches returns this Saturday with the first episode of Season 2 on streamers Sundance Now and Shudder in the U.S., following the U.K. premiere of the entire season Friday on Sky One. [Updated: Season 2 begins its linear run on AMC TV Sunday, June 27th, at 7 pm/6c followed by episode 2 at 8 pm/7c. The rest of the season will air at 8 pm/7c every Sunday.]

It’s been two years since the first season debuted, and when we left off, Diana (Teresa Palmer) and Matthew (Matthew Goode) had decided to test Diana’s timewalker capabilities and cast back to the 16th century to evade Knox (Owen Teale), Gerbert (Trevor Eve), and Satu (Malin Buska) and chase down the Book of Life.

The premiere picks up at the moment they land in London, and while Matthew is returning to an actual home, family, and friends, Diana only has him. Their arrival raises eyebrows among his own kind because a) he’s consorting with a witch, and b) she’s different in a way they can’t quite put their finger on.

Of course, he’s different, too, and must decide whether and how long to maintain the ruse that he’s just coming home early from an assignment up north. Meanwhile, Diana eagerly hits the ground running in pursuit of a teacher and is surprised at the initial static she gets when her excitement to learn isn’t reciprocated.

It’s a slow burn as we kick off the season. The first hour is fairly expository, and finds Diana and Matthew a bit at odds about what their actual plan is. It’s also made plain that even in their own time, they barely know each other, and now she’s getting a crash course in part of his origin story, so the man she sort of already knows is commingled with the man he was, who was radically different in loyalties, demeanor, and judgment.

We know from Season 1, but they’re hesitant to show and share in current company, that they’re madly devoted to each other, so there aren’t any swoony, high drama romantic gestures right out of the gate. It is, fun, though, to watch Diana geek out a bit over walking into the living, breathing embodiment of all the things she’d only ever imagined from her books.

As a reminder, I’ve not read the books by Deborah Harkness, so I can’t speak to the accuracy of the onscreen translation. New cast members in the premiere include Holly Aird, Tom Hughes, Tom Lewis, and Michael Lindall. Farren Blackburn directs a script by Sarah Dollard.

A Discovery of Witches Season 2 premieres on Shudder and Sundance Now this Saturday in the U.S., and you can also watch it and stream all of Season 1 now through those sites and AMC+. New episodes will be released every Saturday. [Updated: Season 2 begins its linear run on AMC TV Sunday, June 27th, at 7 pm/6c followed by episode 2 at 8 pm/7c. The rest of the season will air at 8 pm/7c every Sunday.]

Here’s a sneak peek. And in case you didn’t know, Season 3 is in production now to complete the All Souls trilogy, so there’s even more of their adventures coming to your TVs, likely next year.