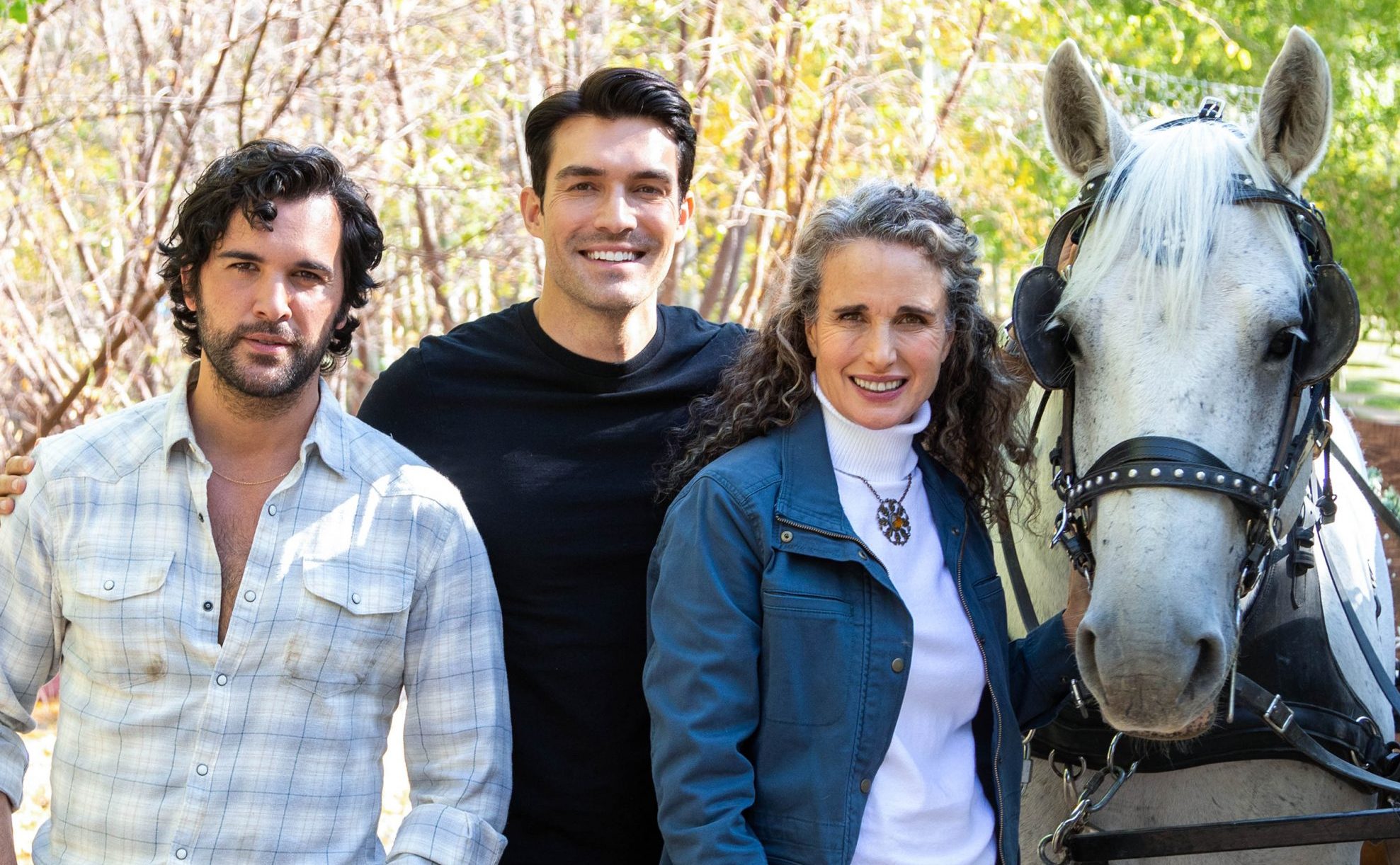 MTV Studios throws its hat into the Christmas romcom ring Sunday night with the multi-network premiere of Dashing in December on the Paramount Network, Logo, Pop TV, and TV Land. In the film, written and directed by Jake Helgren (who also A Very Charming Christmas Town and Christmas on the Menu out this season), Hallmark regulars Peter Porte and Andie MacDowell play Wall Street financier Wyatt and his mom, Deb, and Fuller House‘s Juan Pablo Di Pace is Heath, who works for Deb on her ranch in Colorado.

Wyatt returns home for the holidays with the intent to force Deb to finally sell the property he’s been bankrolling. He gets more than he bargained for, not just from Deb, but also from his childhood sweetheart, Blake (Caroline Harris), who’s close to Heath and has formed a found family with him and Deb to keep the ranch running.

Initially arriving with a boulder-sized chip on his shoulder and a world of unsaid apologies about leaving Deb and Blake behind years earlier, Wyatt is forced to look at who he’s become. In the process, he stumbles into a tentative friendship and eventual romance with Heath.

Heath’s a gentle soul who’s had his own tragedies, and where Wyatt turned the loss of his father into combative ammunition, Heath slowed down, embracing the present and finding joy and purpose with Deb and Blake, their horses, and the ranch–which transforms into a winter wonderland every year. Deb and Blake are fully supportive of a romance, but definitely Team Heath when Wyatt’s brusque tendencies creep back.

When Wyatt softens, and the boys click, it makes for some really lovely moments; and when they misread each other and Wyatt lashes out, neither Heath nor we are sure he’s even worth the effort–or worthy of Heath. Wyatt eventually proves himself; we just have to ride out the bumps along the way.

Deb has her own growth, too, recognizing that Wyatt wasn’t alone in responding to his father’s death in ways that weren’t entirely healthy. Blake is easily the most grounded of the quartet as that take-no-BS friend who found her place in the world after Wyatt left and made her peace with being his first love and later his best friend.

The film was shot this fall in Utah and is gorgeous to look at. Country music is threaded throughout to good effect. There’s a cowboy slow dance scene that rivals Hope Floats for swoonability.