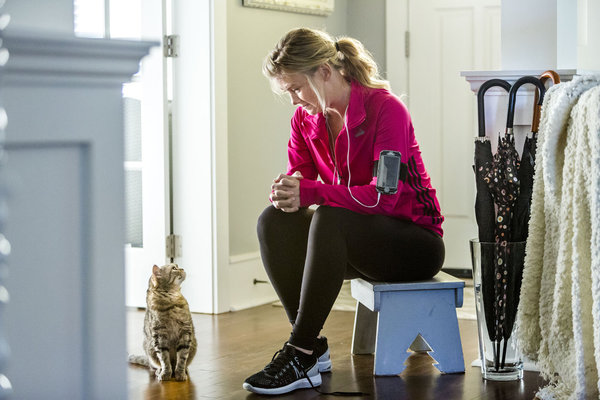 For your Hallmark and Chill viewing pleasure, Murder She Baked movies are back in rotation periodically on Hallmark Movies & Mysteries, and often in back-to-back twofers or all-day marathons. For your easy access, we’ve compiled a guide here to all our coverage and handy teasers for each film. And best news of all, we’re FINALLY getting a brand new film! Alison Sweeney and Cameron Mathison announced on 5/18/21 that they’re back in production on a new one under a new name, Hannah Swensen Mysteries. Woo and Hoo, y’all!

Y’all know how I feel about these, and I love that Chronicle Mysteries has helped bump them back up into regular marathon rotation. We’ve covered all the films, including one-on-one interviews with Alison Sweeney, Cameron Mathison, Lisa Durupt, and Barbara Niven here.

For the unfamiliar, the set of five movies is based on books by Joanne Fluke. They follow Hannah Swensen (Sweeney), a small town baker and owner of The Cookie Jar cafe who can’t help but find herself in the middle of a murder–over and over again. Mathison is Detective Mike Kingston, who’s variably pleading with Hannah not to get in the middle of his cases while also falling in love with her and realizing her wrong place/wrong time more often than not pays dividends.

Their chemistry is so, so good, y’all and they and the regular, recurring cast of Durupt, Niven, Gabriel Hogan, and Toby Levins are everything you hope for in an ensemble. They have such a fun, familial vibe. Best of all, you can start anywhere. If you miss one, start with the next. The five films are:

The one that started it all introduces us to Hannah and her family and her uncanny ability to fall into a murder scene. Mike arrives in town as a big city detective and recent widower who has to learn to work with Hannah instead of against her. I spoke with Mathison about it here.

The second film is a Christmas-themed mystery about the murder of the owner of the local tree lot. This one was my favorite before the last one aired. Lots of Hannah and Mike scenes in this one, and it cemented that this group was so good together. I previewed it here.

In this one, Hannah faces competition from a new bakery across the street, and it doesn’t help that the proprietress is an old friend of Mike’s. When she turns up dead in her shop and Hannah finds the body, things get very complicated. I previewed it here.

When Mike and Bill’s boss, the sheriff (Ty Olsson) is killed, Bill, who’s also campaigning for the job, becomes a prime suspect. Hannah’s asked by the now-very-pregnant Andrea to help run investigative interference and prove his innocence. I chatted with Durupt and previewed it here.

The final movie in the franchise finds Hannah on the judging committee for a live cooking competition, and caught up in the murder investigation of the local high school basketball coach. She’s also balancing mixed signals from Mike that thankfully do get resolved before the final credits. I interviewed Cameron Mathison for it here.

Murder She Baked repeats regularly on Hallmark Movies and Mysteries and every film is available on DVD.

[Updated: The series was rebooted in summer 2021 with the first Hannah Swensen Mystery. Our coverage of those is here.]