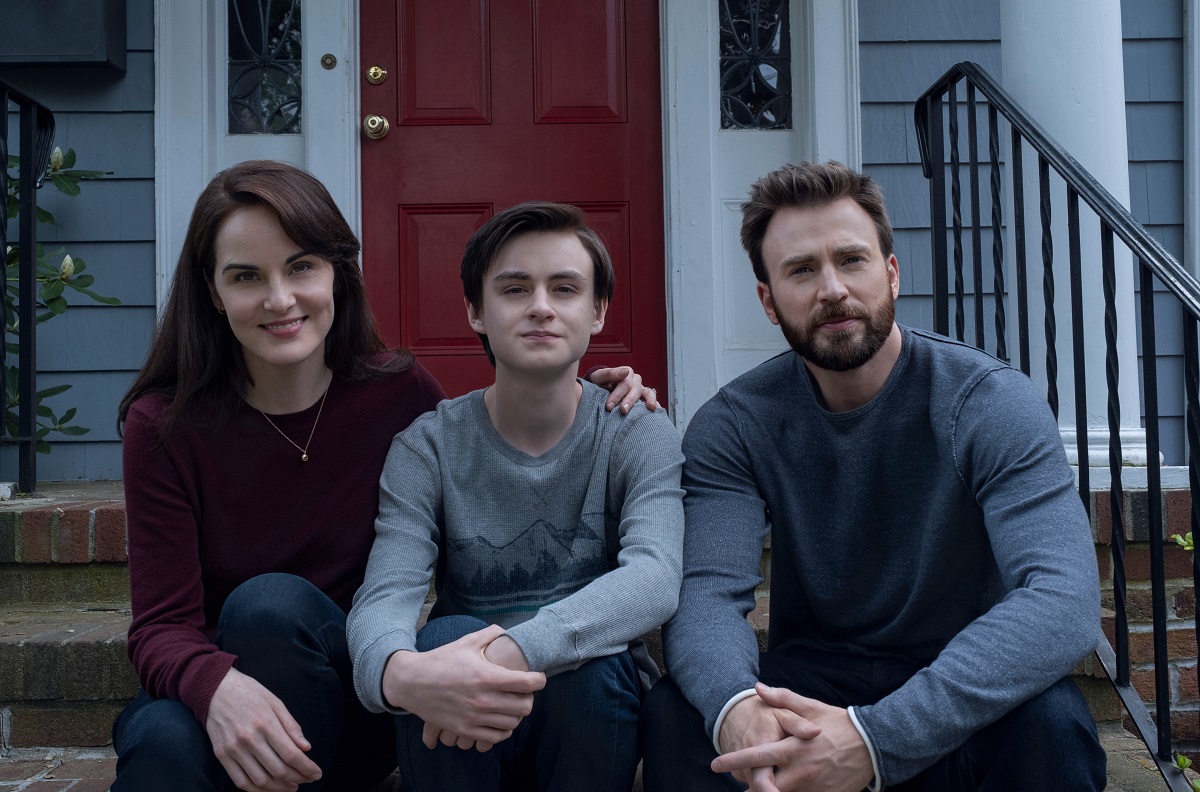 When you come from a place of privilege, life moves along easier. That’s the assumption, anyway. In the opening moments of Defending Jacob, the Barber family–Assistant District Attorney Andy (Chris Evans), teacher and education administrator Laurie (Michelle Dockery), and their teenage son, Jacob (Jaeden Martell, who co-starred with Evans in Knives Out) are inhabiting that rarefied, idyllic air in a bedroom community outside Boston. They’re wealthy, they’re happy, they want for nothing. They’re the white suburban American dream. Or so it would seem.

Andy’s plagued by a secret, recurring nightmare from a childhood memory that he does not share, and it has significant bearing later on. It’s the only hat tip that there’s a layer of unease below the surface. And that surface is polished, professional, and always in charge. Andy’s well-regarded by his colleagues on the police force, including lead detective, Paula Duffy (Counterpart‘s Betty Gabriel) and in in the DA’s office, save for Neal Logiudice (Pablo Schreiber), who plays a larger part later on.

In very short order, the mirage of perfection is broken when one of Jacob’s classmates is discovered murdered in a park. With no immediate suspect, Andy takes point interviewing the students at the school and reassuring the victim’s father, until a combination of online whispers and evasive interviews start to create suspicion around his son.

The title tells you that Jacob is eventually arrested, and the case plays out over the course of the season. That’s just one of the mysteries to solve as the episodes are framed by Andy’s grand jury testimony to Logiudice in a separate case that may or may not be related, set some indeterminate time after the murder case. So we have tandem mysteries to sort though.

What’s delicious for us as viewers is that the series works as a procedural, following the clues, and as a family drama. We watch the picture-perfect family disintegrate as the seeds of doubt take hold and all of the trappings of the life they had–and the friends that ostensibly came with it–all-too-easily fall away.

Evans is impeccable as a father whose love for his son is boundless, but still tempered by some of the undeniable truths that are beyond his control. It’s such a treat to watch him physically deflate Andy from a man with a pretty healthy swagger and self-esteem into a shell of himself who’s trying to protect his family, damn the moral costs.

At one point, he’s very effectively told, “You can be a good father or a good man. You can’t be both.” And when that lands, and Andy knows it to be true, Evans does magical things with his reaction. I think his performance here will shift him toward other dramatic roles in his post-Avengers era and I am here for it. He’s a fine comedian, but so, so good at drama, too.

Dockery is equally good as a mother emotionally unraveling while she questions the truth of what she believes, or thinks she believes. And she has the added weight of desperately searching her own memories of raising her son in search of something, anything, to shift her toward a resolute determination of her son’s actions.

As the enigmatic Jacob, Martell is a cipher. Along with Jacob’s parents, we’re never sure whether to believe, or be sympathetic toward him. It’s a terrifically effective performance. Also look for the always fantastic Cherry Jones as Joanna, the attorney who takes on Jacob’s defense and the role of de facto family counselor who has to remind her former colleague, Andy, of the clear line between father and defense attorney.

The series is directed by Morten Tyldum, who’s helmed projects as varied as the feature film Passengers and the pilot episodes of Jack Ryan and Counterpart. Mark Bomback, who wrote Unstoppable, one of my favorite, utterly repeatable movies, as well as last year’s The Art of Racing in the Rain. adapted William Landay‘s novel.

I have to give a shout out, too, to Atli Örvarsson for his score. He’s previously done the Dick Wolf Chicago trilogy and here his music perfectly captures the mood of the series. Jonathan Freeman‘s lenswork is also superb. It’s a gorgeous series to watch.

The first three episodes drop on Apple TV Plus this Friday, the 24th with the remaining five rolling out each successive Friday.

Apple TV+ is available now in over 100 countries through the Apple TV app on iPhone, iPad, Apple TV, iPod touch, Mac and other platforms, including online (tv.apple.com), for $4.99 per month with a seven-day free trial. Here’s a sneak peek.

Photos and Videos Courtesy of Apple.

The Flash Preview: “The Fury of Firestorm”