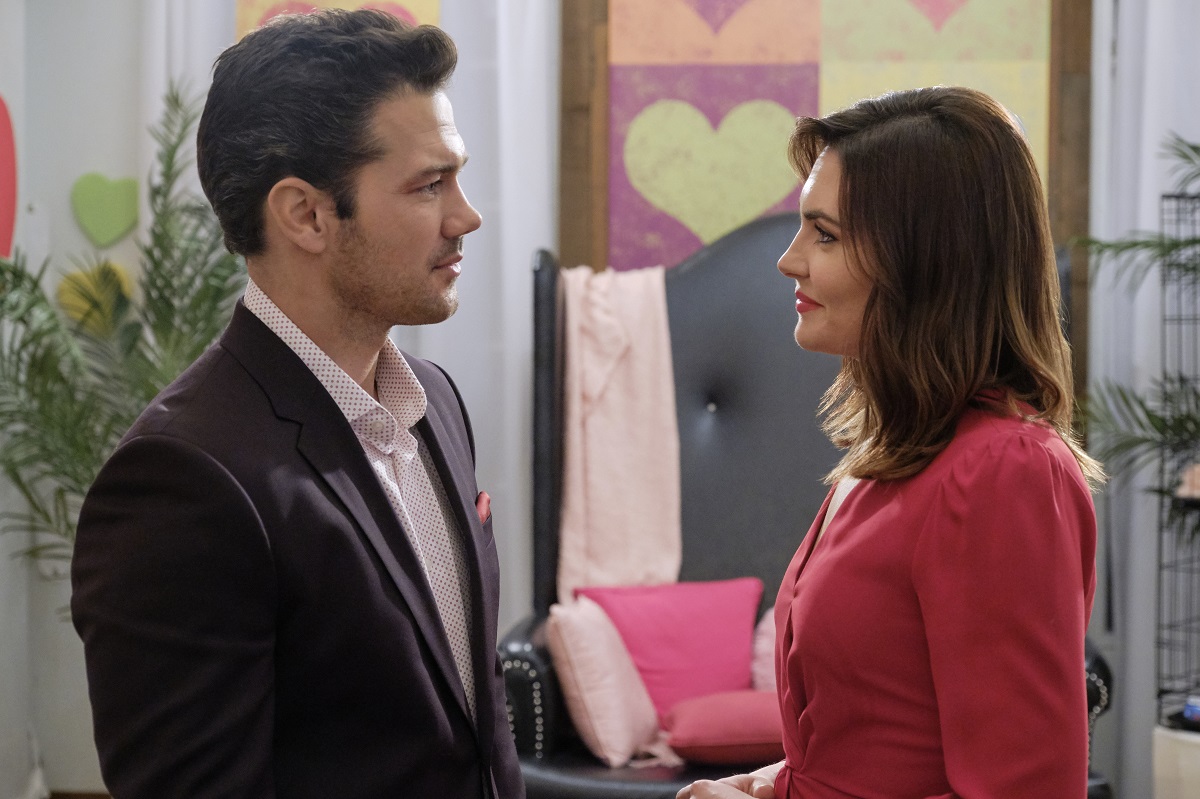 Saturday night on Hallmark Channel, we’re getting one of those terrific pairings that makes you immediately ask a) why it took so long and b) when we’ll get them together again. Taylor Cole and Ryan Paevey headline Matching Hearts and they are seriously so good, y’all.

Cole plays Julia, an expert matchmaker who’s the lieutenant of her company’s owner, Elizabeth (Lossen Chambers). She’s terrific at her job, has good friends, and is working a serious flirtation with rescue dog Luna, who she can’t quite pull the trigger on adopting. She starts to wonder what she’s maybe left out of her life when she meets Paevey’s Daniel, first while out for a birthday party, and later at her parent’s flower shop.

And then it gets complicated when she realizes he’s the entrepreneur recently quoted in the press as saying being single is one key to his success. Elizabeth takes that as a challenge to land him as a client, and then he sort of ends up as one through a six degrees of separation relationship to one of Julia’s success stories. It also turns out that he runs the adoption group that has Luna.

Julia has to step up at work when Elizabeth takes a mini vacation on the eve of their annual Valentine’s Day client party. She takes the initiative to evolve the party and perhaps increase her worth as Elisabeth’s successor, until it gets a little out of hand.

As Julia starts to prime Daniel to participate in their matchmaking program and he’s helpful in matters related to the party, they end up spending more time together than necessary. Right out of the gate, it’s patently obvious to everyone else that her matchmaking work here is done, but it’s a two-hour movie, so it’s going to take some time for that to sink in.

The pair have just an insanely easy chemistry that’s a joy to watch, even before they get to that awkward, “what is happening here?” stuff. They bond over Luna, work, and life, and regardless of romance on the horizon, they actually make pretty decent friends, until they’re both wistful about the prospect that that’s all they can be.

I liked it a lot. On top of Cole and Paevey, there’s fun casting all over the place with several Hallmark regulars. Donna Benedicto is Julia’s BFF. Gwen, Debs Howard is one of Daniel’s matches, Chloe, Jessica Steen and Milo Shandel are Julia’s parents. Lara Gilchrist and Latonya Williams are two of Julia’s clients.