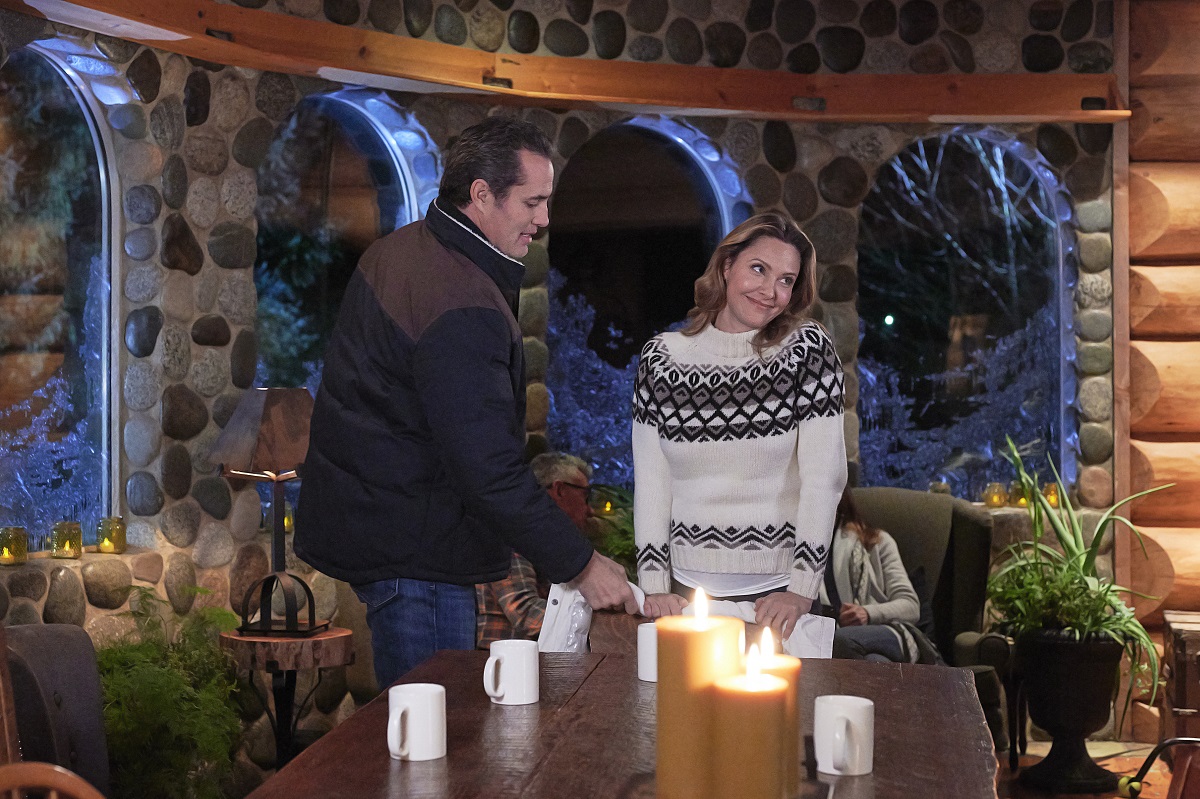 Victor Webster is one of our favorites here at TV Goodness, and his Hallmark projects roll through at an unpredictable cadence so we always take it as a treat if he does two within a year. Last summer, when I spoke to him for the new Matchmaker Mysteries film, he didn’t have another Hallmark film on the horizon, so we were surprised and happy to see his name pop up in the Winterfest list of movies. Tonight, he reteams with his A Harvest Wedding co-star Jill Wagner in Hearts of Winter, which she also executive produced.

Wagner plays Bethany, a rising interior designer who’s built her burgeoning empire around the mantra of, “Meaning, Abundance, and Peace,” so you’ll get used to hearing it. When she pitches a home makeover contest during a local chat show appearance to promote her book, she gets the attention of preteen Zoe (Lauren McNamara), who decides to enter on behalf of her widowed single Dad, Grant (Webster)–without telling him.

Zoe writes a heartfelt entry with the help of her Dad’s BFF, Joel (Michael Karl Richards) and it does the trick, winning over Bethany and her BFF/assistant, Emerson (Rukiya Bernard). Before that happens, Bethany, Zoe, and Grant have a meet cute in a bookstore, so when Bethany shows up with a camera crew in tow, things get a scoche awkward.

Grant’s blindsided, and not particularly happy about making over the house he’d bought with his late wife, who didn’t live long enough to put her stamp on it. It doesn’t help that the contest is fast-tracked by the promise of a notable magazine spread. Zoe and Bethany eventually wear him down, and he starts to enjoy the process-and the designer. As Emerson catches the project on video and posts them to their site, the public gets in on it too, nudging Bethany and Grant together.

Grant’s also preoccupied running a local inn, where Joel is the chef–and his daily sanity check–and keeping Zoe on track for school and an ice skating exhibition. When the makeover barrels into his already full life, Joel helps him realize that there’s still room for more. Emerson and Bethany’s brother, Ryder (Brendon Zub), do the same for Bethany.

Hallmark regular Allan Harmon directs a script by Hallmark newcomers Alison Spuck and Casie Tabanou. It’s a really nice romance that’s a different variation on the typical formula, which is refreshing. And Webster and Wagner have a terrific time with each other, and McNamara. I was a good 30 minutes into it before I even remembered A Harvest Wedding, which is 100% meant to be a compliment.

Webster and McNamara are terrific, too, in their Dad/daughter scenes together. The movie was filmed just before Wagner announced her pregnancy, and she’s just gorgeous in this. Lastly–it’s time for Rukiya Bernard to headline her own romcoms, y’all.

Hearts of Winter premieres Saturday night at 9 pm/8c on Hallmark Channel, and is followed at 11 pm/10c by the half-hour Love Ever After preview special, co-hosted by Larissa Wohl and Luke Macfarlane. Here’s a sneak peek, and Webster’s appearance this week on Home & Family.

Tune In Alert: FOX’s Breaking In