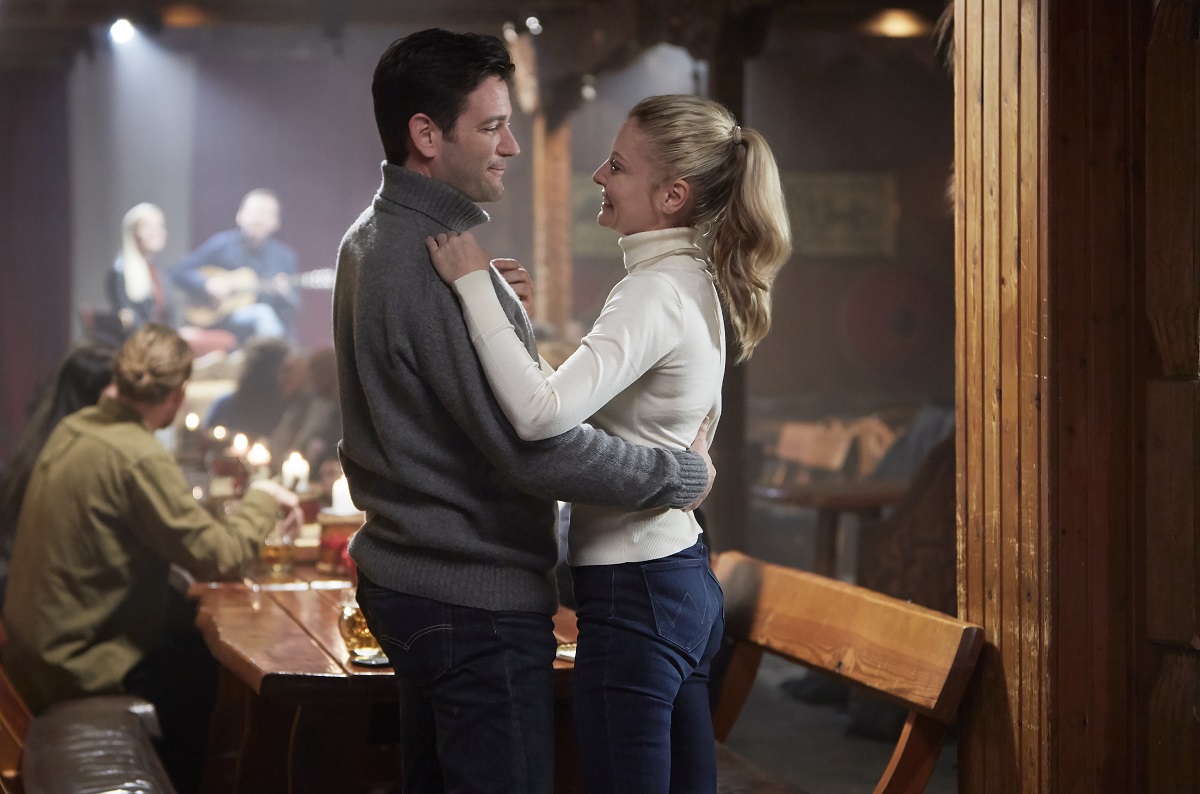 Hardworking podcast producer Chloe is hoping to recharge her batteries during a spontaneously planned vacation with her college friends Isabella and Kenneth. She has chosen Iceland as their destination, inspired by a podcast guest who found a new lease on life and career during a sojourn in the majestic “land of fire and ice.” But Chloe’s transformative journey takes an unexpected turn with the a Photo: Colin Donnell, Kaitlin Doubleday Credit: ©2019 Crown Media United States LLC/Photographer: Lilja Jonsdottir

Saturday night, Hallmark Channel unveils another hybrid romantic comedy/travelogue with Love on Iceland, which filmed across the titular continent and may have a few folks casually price shopping excursions by the first commercial break.

Headlined by Kaitlin Doubleday and Hallmark first-timer Colin Donnell and co-starring Patti Murin and fellow Hallmark newbies Preston Sadleir and Kate Easton, the movie is an ensemble of sorts about a group of college friends who reconnect over a quick getaway. The central couple are Chloe and Charlie, who were former sweethearts.

When Chloe (Doubleday) and hr BFF Isabella (Murin) decide to get the band back together on short notice, Charlie (Donnell) unexpectedly arrives via a secondary invitation from Kenneth (Sadleir), who didn’t realize Chloe had excluded him. What starts out awkward thaws pretty quickly as the group, and the couple, fall back into familiar banter with each other.

They’re also accompanied by tour guide, Johann (Jóel Sæmundsson), who becomes a de facto sixth to their party. As the gang travels the country, Chloe is also mulling a professional opportunity to move from podcast producing to hosting, while Charlie is considering getting off the merry-go-round of being a globetrotting photographer, which is the thing that fractured their romance years earlier.

The movie is a mix of group interactions and one-offs with Charlie and Chloe as he helps her get closer to her dream job, which makes him seriously re-evaluate the life he’s missing out on. It’s also gorgeous to look at.

It’s fun to see husband-and-wife Donnell and Murin in a project together and I vote that she’s the lead the next time they team up. Clare Niederpruem, who directed November’s Holiday for Heroes, directs a script by Joey Elkins and Blake Silver.