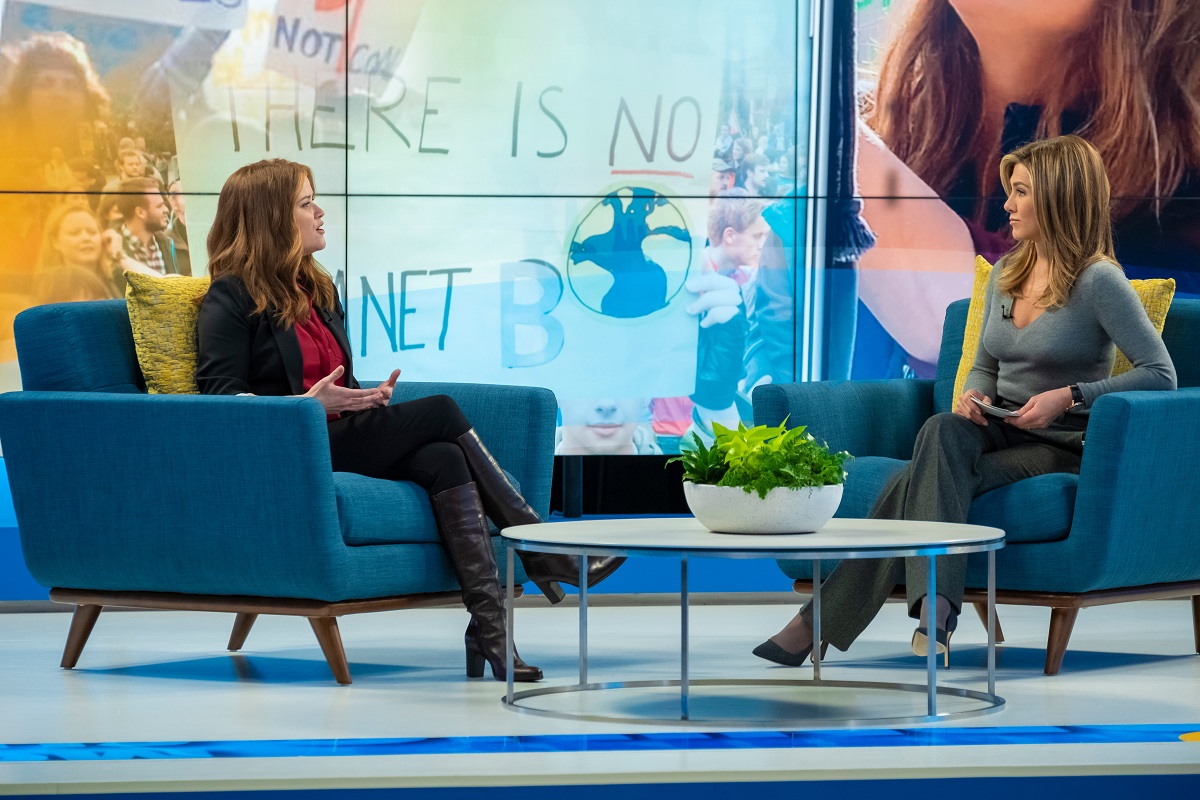 Apple TV+ formally launches tomorrow, and their tentpole premiere, The Morning Show, reunites Jennifer Aniston and Reese Witherspoon in an hourlong drama set against the backdrop of a morning TV talk show in the aftermath of a Me Too scandal.

Aniston is Alex Levy, the longtime host who’s still waiting for her contract renewal when she’s rocked by the news that her co-host of 15 years and work husband, Mitch Kessler (Steve Carell) has been fired for sexual misconduct. She proves her mettle when she’s given word two hours before going live to millions of viewers at home. Kessler, meanwhile, privately, at least. cries foul on the harassment, instead deflecting that it was a series of affairs with subordinates, yes, but not a crime, and not rape.

While Alex is trying to salvage her show, rough-around-the-edges veteran regional reporter, Bradley Jackson (Witherspon) is throttling a faux protestor at a West Virginia coal mine protest, and because it’s 2019, video of it goes viral before she can even file her story.

When Bradley’s invited to New York to appear on The Morning Show, it creates an unexpected opportunity. The cast and story are rounded out with the network execs, producers, and staff that make a daily show tick, and Alex’s and Bradley’s extended families, played by familiar faces like Nestor Carbonell, Mark Duplass, Ian Gomez, and Shari Belafonte.

Aniston and Witherspoon crackle in their initial pairing as they circle each other in what should be a straightforward vanilla fluff piece. The pilot spends a bit more time on Alex’s dilemma and the personal and professional fallout from Mitch’s transgressions. Aniston is excellent, showing us both sides of a woman who’s presenting one persona to the world and another, much more vulnerable version when the cameras are off.

Witherspoon’s Bradley is fiery in a Sweet Home Alabama “cut the bullshit” way. I expect them to be fun to watch together. It’s an intriguing premise to sort of lean into the age card about Alex when Bradley’s character is introduced as a career journo who’s only missed opportunities because she doesn’t play nice, even if she plays fair.

Carell is also really good as a guy we’re not sure is telling the truth, and just caught between the current climate and trying to defend his honor or is really the slimeball they say he is.

The Morning Show premieres its first three episodes this Friday, with subsequent episodes released every Friday. Apple TV+ will be available November 1st in over 100 countries through the Apple TV app on iPhone, iPad, Apple TV, iPod touch, Mac and other platforms, including online (tv.apple.com), for $4.99 per month with a seven-day free trial. It’s already on tap for a second season.

Photos and Videos Courtesy of Apple.