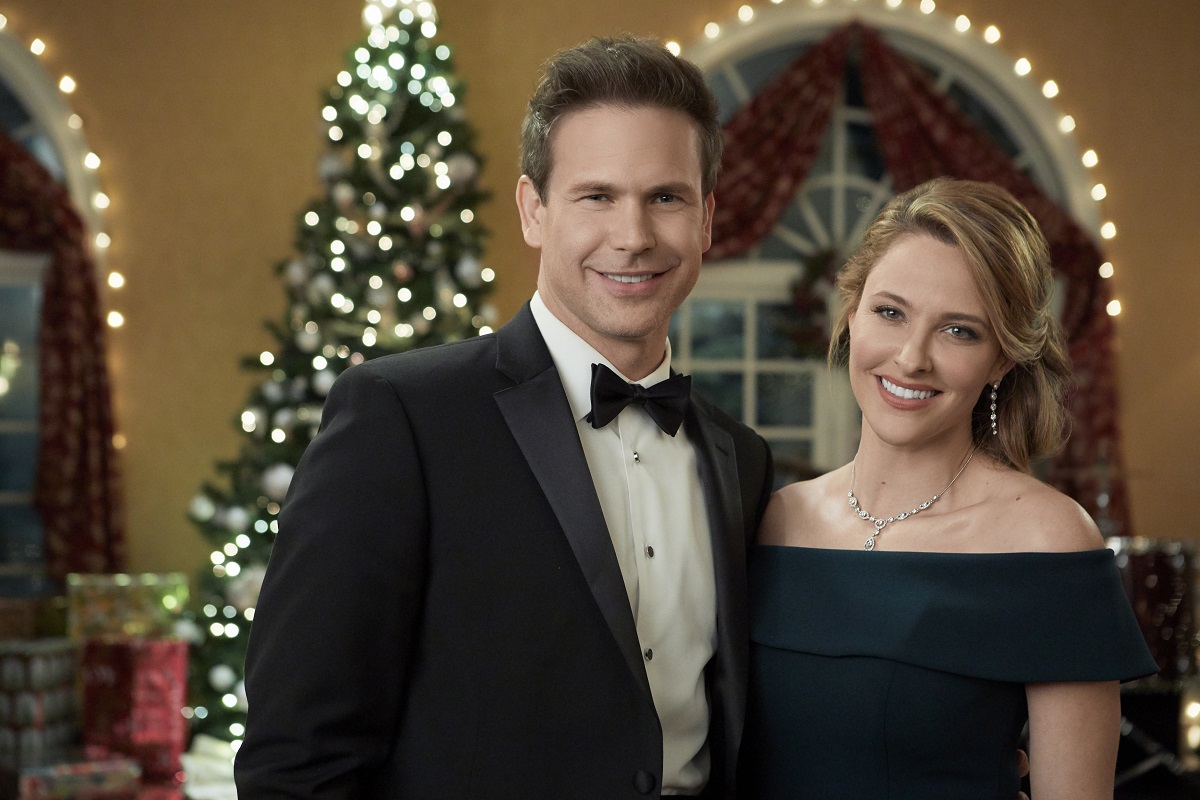 There’s a fa-la-la-la-lot of Christmas cheer coming your way as Hallmark Channel, marking its 10th season, and Lifetime, kick off their 24/7 holiday movie cycle tomorrow, October 25th, a full eight weeks before Christmas. Hallmark Movies & Mysteries got the jump last Friday. UP TV and Netflix are also rolling out new Christmas movies.

The good news is that means it’s even more likely that your oldies but goodies will finally end up back in rerun rotation. The better, albeit slightly overwhelming, news is that there will be around 80 new titles across all the outlets that we know of, and we’re sure there are more. Hit us up with your fun finds in the comments!

If you’re not quite ready to abandon your pumpkin spice just yet, you’ve got Hallmark Movies Now, Hallmark Drama, and Lifetime Movies to fill the void.

Here’s a look at the six premieres coming up this weekend!

Corey Calvin (Ashley Newbrough) dreamed of being a theater director in the city but that meant abandoning her late father’s antiques shop in her small hometown and leaving her post as director of the the local Christmas pageant. She has to decide whether to choose love with LA-based Ryder Donnelly (Kyle Dean Massey), who visits her shop, or staying home.

Country music star Laney Blu (Megan Hilty) hasn’t been back to her Tennessee hometown since leaving it behind at 17. Set to headline a Christmas concert in NYC, she decides to make a quick pit-stop to see her family and finds herself stranded during a storm and roped into taking part in a local Christmas concert. Soon, she begins to fall in love with the people, place and just maybe, a handsome snowplow driver named Robbie (Marcus Rosner).

Former interior designer Abbey Fuller (Jill Wagner) can’t resist the opportunity to redecorate the grand family estate of staid businessman Nick Sinclair (Matthew Davis). But her challenge involves more than furniture, paint, and a tight Christmas Eve deadline. The real conundrum is Nick, a buttoned-up workaholic who surprises Abbey, and himself, when he begins to reveal the kind, thoughtful man beneath the polished façade.

Two rival musicians, Lindsay (Marla Sokoloff) and Wes (Rob Mayes), who perform in a dueling piano show, suddenly find themselves without a gig on Christmas Eve and decide to road trip to their neighboring hometowns. During the drive, the mismatched pair navigate various Christmas-themed hijinks and and brave a massive snowstorm, which just may bring them closer together.

No Time Like Christmas — Sunday, October 27th at 8 pm/7c (Lifetime)

After Emma (Kyla Pratt) finds the engraved watch of her college boyfriend, Fletcher (Edward Ruttle), at a vintage jewelry shop, her sister, Bronwyn (Rachael McLaren). believes it’s a sign, and decides to secretly play cupid by sending Emma to the same bed and breakfast in Vermont where he is staying. Once there, she’s shocked to bump into her first love and his vivacious daughter. The two fight their feelings as they plan a Christmas Eve show in hopes of saving the local theater.

Check back this season for previews of each weekend’s premieres and exclusive new interviews!

Photos and videos courtesy of Crown Media, Lifetime, and UP Television.