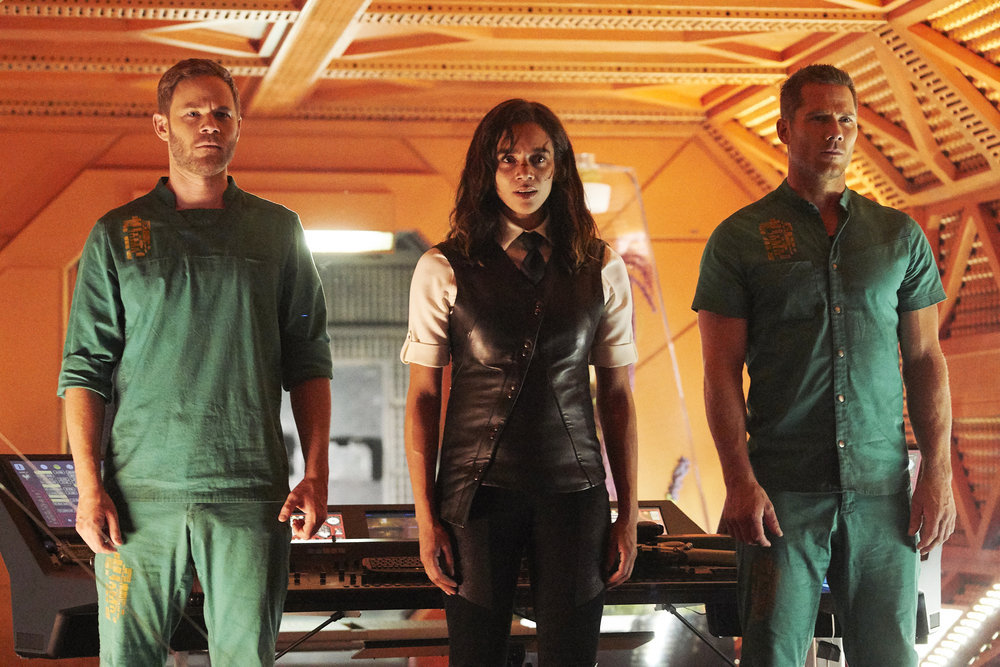 Last week‘s Killjoys delivered quite the cliffhanger as Aneela finally returned, Team Awesome Force was double double (triple?) crossed, and Khylen was about to pull Gared out of the memory matrix. This week’s episode continues those three arcs and adds in a dash of Fancy, too.

Inside the prison, Dutch and D’av regroup by playing to Coren’s ego about what to do next. Unsure of whether Johnny’s alive, they’re still determined to not add to the body count. The ruse to proceed safely involves, among other things, Dutch rocking Rennika’s vest ensemble and posing as the warden.

Separately, Rennika and Johnny–and Newcy with some on-the-job training–are trying to summon help and discover that the plan Dutch has hatched has an unexpected wrinkle.

Khylen fills in the big gaps for Gared and then asks for a favor that’s a Capital Bad Idea. Elsewhere in the Quad, Zeph and Pree take steps toward building out their rebellion team.

With Aneela freed from the cube, the Green Queens are finally reunited, but it doesn’t go quite as smoothly as Delle Seyah hoped. Soon, she’s the odd woman out in their unconventional family, until she speaks up.

Speaking up is a fairly common theme in the episode, begetting us a very long overdue conversation and some tears. And a couple of surprises about what those conversations would reveal. I kind of love thinking I’m a smarty pants who’s figured out a character’s train of thought only to be gently reminded I have no clue.

The whole cast is terrific in this one. Luke Macfarlane again gets to go big with his comedy, Aaron Ashmore breaks us, and Hannah John-Kamen playing two separate characters, delivers two completely distinct, equally joyful smiles that could power the sun. I said on Twitter earlier this week that these three are lightning in a bottle. Over and over they prove it.

Showrunner Adam Barken wrote the episode, and James Genn, who directed “A Bout, A Girl,” continues his back-to-back block. I was on set for this episode, so it’s neat to see the finished version. Now past the halfway mark, this season has gone so quickly. Each one so far, and each one to come, is a gift. I’m so grateful for these people and this show.

Killjoys airs Fridays at 10 pm/9c on Space Channel and Syfy. All of our Killjoys coverage, including a new interview with Sean Baek, is here. You can catch all four seasons and the first five Season 5 episodes on demand on the Space Go app and Syfy app and website. Here’s a sneak peek of “Three Mutineers.” Come join the live Tweet and then check back after the East coast air for my exclusive interview with Adam Barken!

Good Witch Preview: “All in the Family”