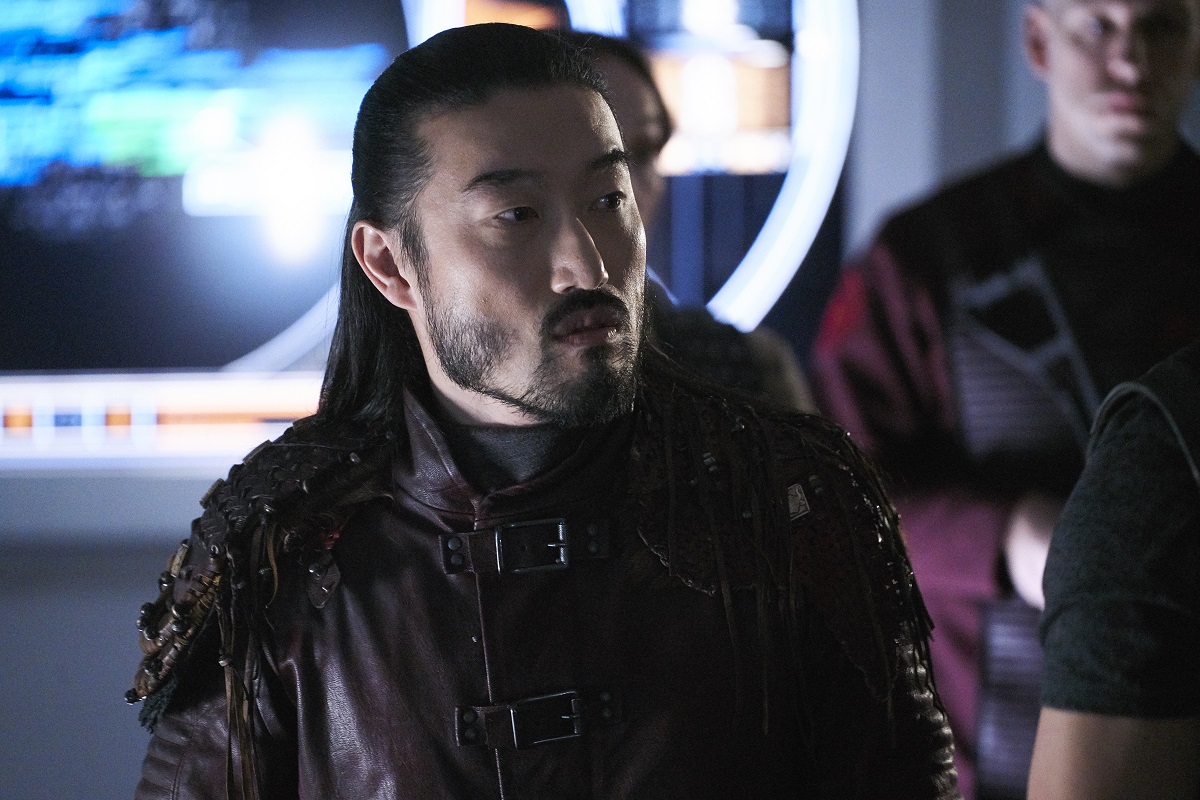 Fancy’s back (back again) this week on Killjoys! Last summer, Sean Baek and Tamsen McDonough were paired to sit down and chat with the press tour. McDonough’s interview is here. During that same conversation, Baek talked about his character’s arc, bonding with the fans through social media, and the idealized world the series embraces that fosters camaraderie onscreen and off.

Baek has often characterized Fancy as the designated asshole, but as he recounts, he often had good reason. “From Season 1, Fancy came across as this rival to Dutch and co. and in Season 2, he became Hullen and in Season 3, one of the cleansed, and in Seasons 4 and 5, [he goes though] yet another change,” he recalls.

“Ever since [Fancy] became cleansed, there was always this push and pull within the organization as a RAC member. He felt like he was a valued member despite [his reputation]. He got his job done. He was by the code and he was a professional.”

“[Last season] he was [becoming a bigger part of] Team Awesome Force, and they say drama is all about conflict and that’s where the conflict [came] from. He wanted to push them away, considering what he went through in Season 3 being betrayed by Turin and one of his own and he wanted to fulfill [the larger goal].”

“That’s the beauty of it for Fancy. He’s kind of there, but there’s this tension between the three main characters and Fancy. They have to use him and hate to like him and a lot of humor comes out of that. As an actor playing this character, it’s like Christmas every day because you get to go on these different journeys. It’s hard to expect [what’s coming next]. It gives me the freedom of playing scenes [in different ways].”

You can find Baek on Twitter and Instagram, and he says participating on the platforms and engaging with fans has its origins in his own fandom watching shows like Wonder Woman, The A-Team, and animation series as he was growing up. “I was active on Twitter before Killjoys, and since then I’ve become more active,” he explains.

“For me…being a Canadian actor, I hardly look at myself as a star of some show. I get irked a little bit about that [label]. I’m not a star. I’m an actor. [Social media] is a nice way to interact with people who work on the show, There’s proximity that happens. It’s not behind this veil of secrecy.”

“I think it’s part of that fun, that experience. Generally, I like people, I like interacting with people. People interest me. My 20+ career [has been] stimulating and interesting because it’s a constant study of human characters—whether it’s a good guy or bad guy—of human psyche and behavior. “

Baek credits series creator Michelle Lovretta with the inclusivity of the series that’s created a family for everyone working on it, which translates into the stories they tell. “All these ideals we want to create, of being forgiven, of people who are different, or sexuality, holding up those ideals and telling this story, I think there’s that kind of yearning for a better world that we all share,” he says.

“We all want to be loved and be part of something. That sense of belonging. It’s nice to share that with the fans as well as the people who work on the show. I’ve never worked on any show [before] where I felt just at home. Coming back to the studio…I’ve been here since Season 1.”

“It’s a different room in my life. I open the door and come in. It’s really lovely that Michelle Lovretta created [that] behind the camera as well as on camera—it comes from the top down. [It’s]a lovely environment to be in. We’re just here to have fun because we love what we do. We love telling the story.”

Next up, you can catch Baek in Canada in early 2020 on the upcoming midseason series Nurses on Global TV and Utopia Falls, from Dark Matter showrunner Joseph Mallozzi, on CBC Gem.

Killjoys airs Fridays at 10 pm/9c on Space Channel and Syfy. All of our Killjoys coverage is here. You can catch all four seasons and the first five Season 5 episodes on demand on the Space Go app and Syfy app and website.

City on a Hill Season 1 Finale Preview: "Mayor Curley and the Last Hurrah"

We Need To Know: When Will Artie and Tina be Reunited on Glee?