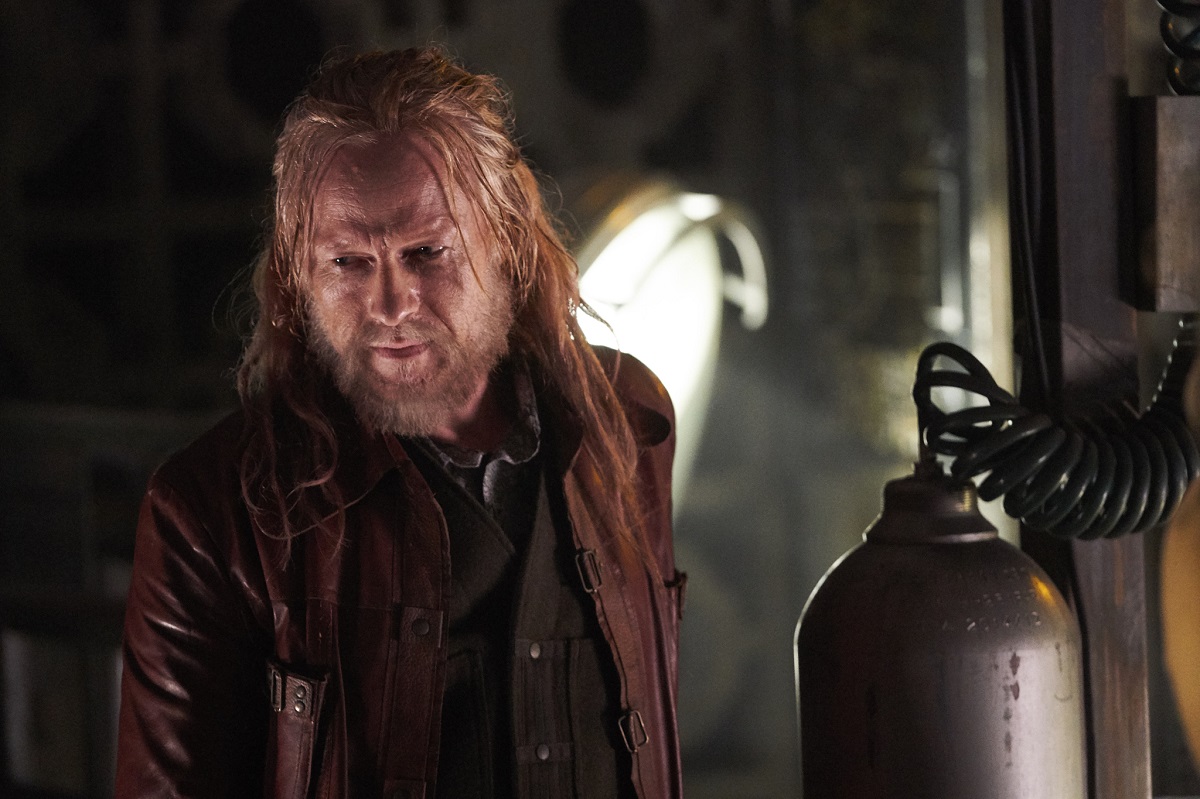 I feel like Zeph was all of us last week when she leapt at a reawakened Turin with, “I’ve missed you, angry ginger!” Or maybe that was just me. Last summer during the press day set visit, we sat down with Patrick Garrow and Kelly McCormack for a chat about the show and Season 5. McCormack’s part of the interview is here. Garrow weighed in on some of the same themes–the particular joy of working for writers who get him, and still being around five seasons in.

While the scripts usually came in fairly close to shooting, Garrow says the writers still would dole out little teases about what to expect so he had an inkling of who memory matrix Turin might be. “You have a certain amount of advance warning…the little chitter chatter from the writers about eight episodes ahead and then you have to sit on that information for two months,” he says. “[They mentioned] ‘man bun’ and I thought, ‘I don’t know what they’re dreaming up back there, but I’m apparently the Dude.’”

As we saw with our other beloved characters in the first few episodes of the season, the reset didn’t claim the original personalities. Garrow enjoyed retaining Turin’s signature edge, and that Turin was increasingly written for him. “The fun thing the writers are doing, even in their mind-wiped place, is when the characters meet each other, they are [still] the characters we otherwise know very well,” he points out.

“[Then it becomes], to what extent [do] we treat them the exact same way as we would in other seasons? The audience knows full well who these people are. It sounds like he’s talking to Johnny but he doesn’t know it’s Johnny. It’s fun for the audience and writers to share that”

“There’s a certain amount of synchronicity with the writers room when they love the way you do certain things and they start to write to that. That’s a great privilege as an actor. You don’t get that when you guest star on series. You’re starting from zero. They can’t write for you the same way. It’s a privilege to feel that, for the writers to say, ‘We get your sense of humor,’ and [have them] write for it.”

“All the stuff you normally massage and spin and take out of another script [from] a new bunch of people…you don’t have to do that because [here] they’re already writing for your particular sense of snarkiness or sense of humor or the way you would spin something. And it comes out of your mouth just like butter. It’s really nice.”

Garrow said that he and Rob Stewart, who have crossed paths on several projects over the years, often joked that one or the other would survive a series when a script looked like maybe one or both didn’t. He says he sweated less about that as Killjoys kept bring him back. And he appreciates that the longevity has afforded Turin a natural evolution and arc.

“Over a number of seasons, you can have a base color as a character. For example, Turin is a crochety piece of work. You pick your moments and you get revealed as something else. which is nice. You only get that opportunity if your character’s around for an entire season, or in this case, five seasons,” he shares.

“You get revealed in certain situations. It’s not, ‘I’m going to give you a monologue now about what a nice guy I am.’ No. We don’t like that. That’s boring to you. We want to see that in an actual dramatic situation where it’s revealed that he’s not as much of an asshole as you might think.”

Killjoys airs Fridays at 10 pm/9c on Space Channel and Syfy. All of our Killjoys coverage is here. You can catch all four seasons and the first four Season 5 episodes on demand on the Space Go app and Syfy app and website.

City on a Hill Preview: "The Deaf Sage of Pompeii"

The King is Dead, Game of Thrones “The Lion and the Rose”