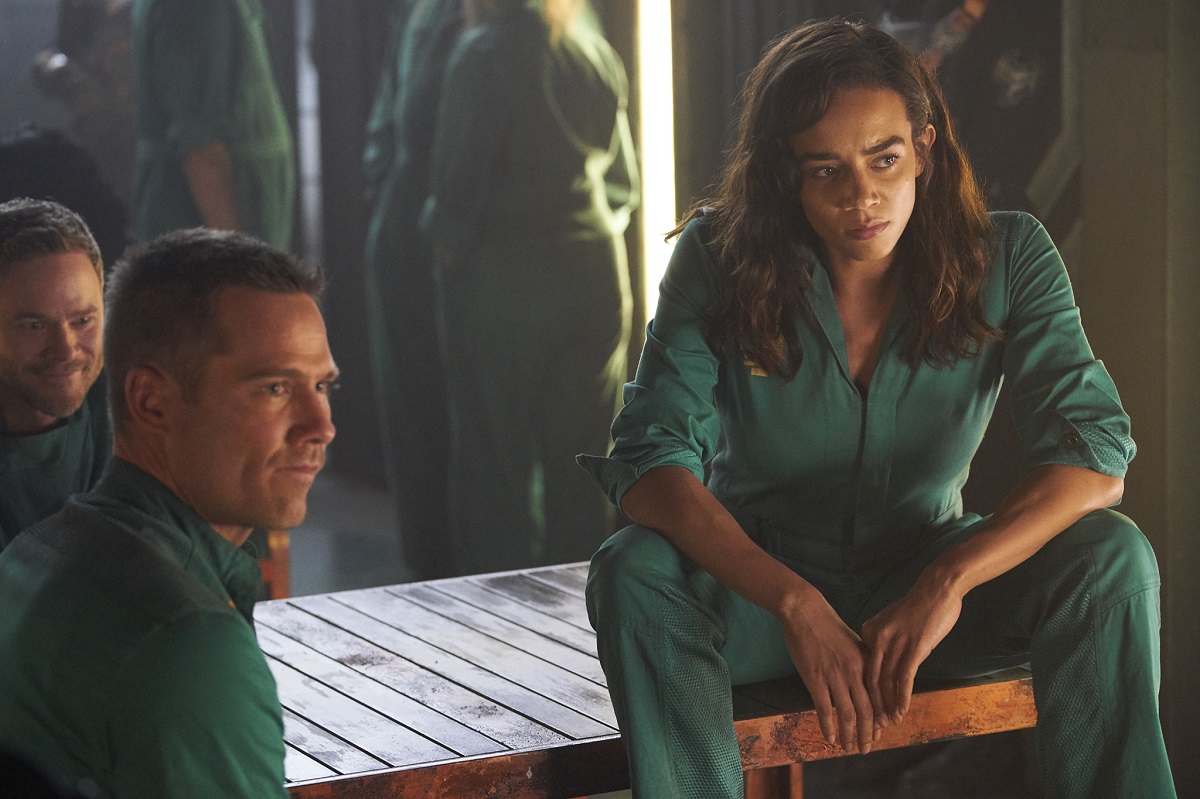 If there’s one thing we know from being day-one Killjoys fans, it’s that we don’t have to wait long for the emotional sucker-punch episodes to be followed up with much lighter icebreakers. Case in point, after we poured one out for Lucy last week, this week we find our crew confined to a supermax prison where snarky shenanigans ensue and we all win.

The trio receive a rude awakening when they realize they’re being locked up for years, and the warden (Star Trek: Discovery and Mary Kills People‘s Rachael Ancheril) is having none of their “But we’re killjoys and this is a mistake” protestations. Pretty soon they’re divided but not conquered.

We have some nifty callbacks to things that Dutch can do with kitchen utensils and convicts formerly on the receiving end of their warrants. Once they regroup with each other and reassess the situation with the warden, it becomes clear that they might have jumped the gun on missing a mutually beneficial relationship.

Up on Aneela’s ship, The Lady is still struggling with the humanity of her host, and Khlyen has a heart-to-heart of sorts with her about what exactly she signed up for. And we get a little more info on the supermax arrangement.

Down in Westerley, Zeph helps herself and scrambles for allies. That provides some delightful Turin and Pree discussions and startling perspective on Westerley’s place in the J. They also work on putting another chink in The Lady’s armor with an accidental discovery.

It’s a fun, sassy episode with a side of ass-kicking, the Killjoys specialty, and some wink-nods like green prison uniforms (which don’t quite fit D’av). Look for Reign‘s Anastasia Phillips as a a slighly batty inmate who gives some sage advice to D’av. There’s also a sweet truth-telling moment between D’av and Dutch.

Paolo Barzman directs a script by Julie Puckrin. Check back tomorrow after the East coast airing for my exclusive download from Puckrin on the episode.

Killjoys airs Fridays at 10 pm/9c on Space Channel and Syfy. All of our Killjoys coverage is here. You can catch all four seasons and the first three Season 5 episodes on demand on the Space Go app and Syfy app and website. Here is a sneak peek of Friday’s episode.

Photos and Video Courtesy of Space and Syfy.