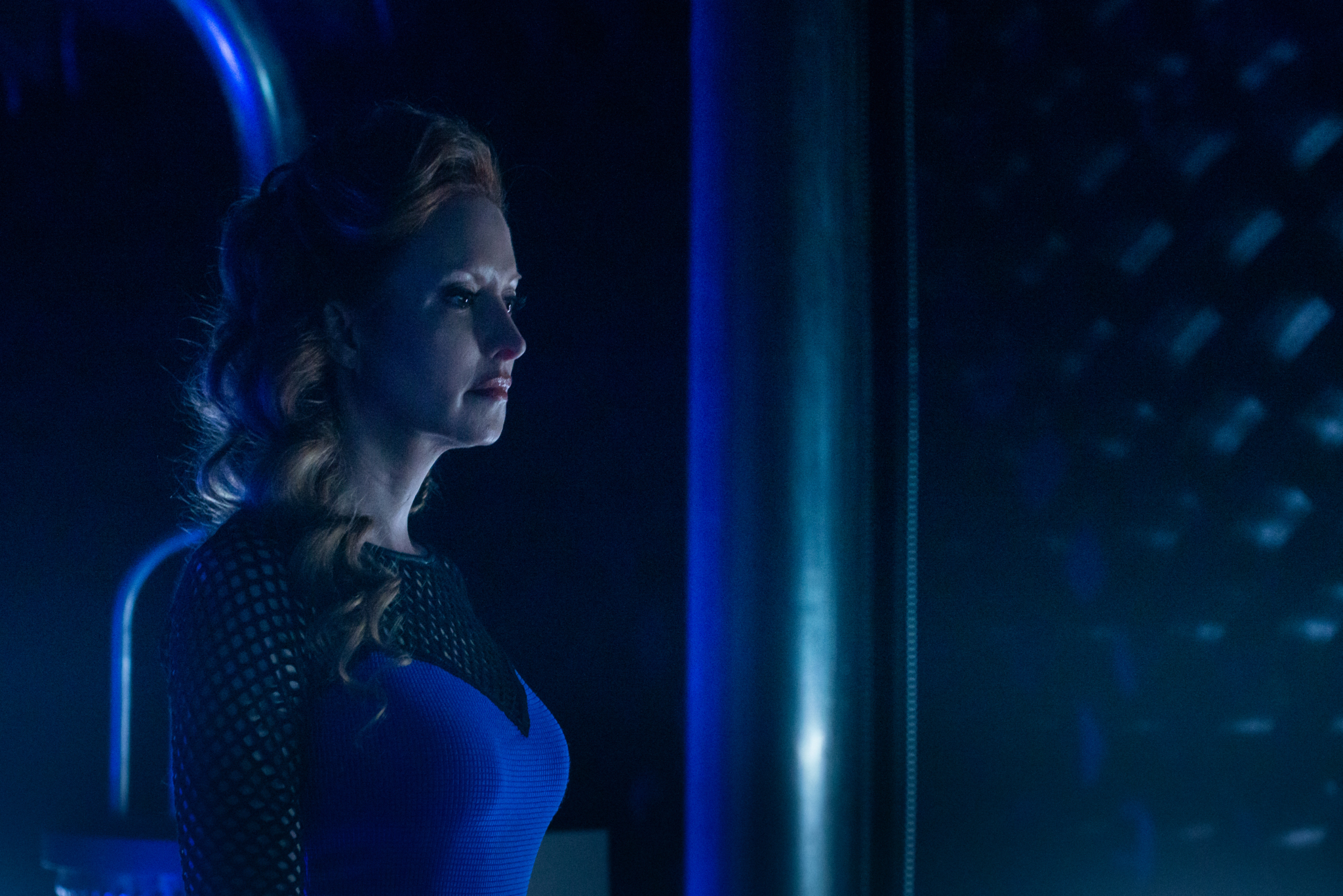 Friday’s Killjoys was a standout episode for Lucy and Tamsen McDonough, who voices her and returned once again onscreen. I sat down with McDonough last August during the press day set visit. At the time, we didn’t know yet that Lucy would sacrifice herself, so we didn’t get into that, but we did talk in general about her five-season run as the fourth Killjoy, and the conversation turned out to be surprisingly relevant.

One of the reasons we felt Lucy’s loss so deeply is the humanity that McDonough has infused into her voice, and she says that’s been a natural progression of all the things Lucy’s been through. “When I got the audition…I was requested because of a character I’d done on Lost Girl. They liked the snarkiness and the fun and the sarcasm of that character. Immediately, I’m going in with a human in mind and then they said she’s AI,” she recalls.

“AI is constantly learning, as my little Google Home tells me. Everytime I hear ‘I’m still learning,’ I think, ‘Lucy?’ I always want to thank it. [Lucy] is always learning. I was looking back at Season 1 and she was more robotic at the beginning. I’ve made her more human over time, and possibly the sound people have calmed the filter down perhaps a little bit.”

“She is learning. After ‘I Love Lucy.’ when she got to touch people and kiss Johnny and really be a human of sorts, I think she learned again. [I’m] molding her voice and her whole AI persona into more of a human all the time.”

We also saw in “Three Killjoys and a Lady” that Lucy had to step outside of her programming to help Johnny. McDonough says that’s something Lucy’s always struggled to balance. “I’ve always likened Lucy to a Golden Retriever who’s always wants to be human but just can’t quite get there,” she laughs.

“I think she goes through these ups and downs of understanding humans a little better and then they do something else that she doesn’t get. I like the waves she goes through, but she is always clear that Johnny is who she is crazy about and who she will do anytting for, while having to maintain the structures placed within her that she can’t break from.”

“There’s always this cool tension with her. She’s always being pulled into three directions. Each of the focuses gets higher and lower in each episode. In one, her love for Johnny is going to go way up, and in another, her progamming won’t allow her to do something, so there’s these three forces pulling at her all the time and each one has its peaks and valleys.”

You can find McDonough live Tweeting the episodes on Fridays, and she credits her sister with getting her onto Twitter. Once there, she embraced it. “[You log on and you see comments like], ‘You’re really great on the show,’ and [you think], ‘Oh, I like this.’ I warmed up to it very quickly,” she admits.

“Everyone is so supportive and so lovely. To me, it feels like it’s theater and that you’re getting direct responses really quickly based on your character and work and all these great things and you get to talk about something you love. You’ve got this cool thing in common and these great little offshoots beyond it. I’ve really enjoyed it. It’s such a cool way to connect.”

Looking across the series’ five-season run, McDonough settles on the word “family” to describe the experience. “This is who were are,” she says. “This is what we’re a part of. It’s a collective experience now.”

Killjoys airs Fridays at 10 pm/9c on Space Channel and Syfy. All of our Killjoys coverage is here. You can catch all four seasons and the first three Season 5 episodes on demand on the Space Go app and Syfy app and website.

Krypton's "Blood Moon" Tragedy Is No Trick of the Light

City on a Hill Preview: "High on the Looming Gallows Tree"

Game of Thrones “The Door”