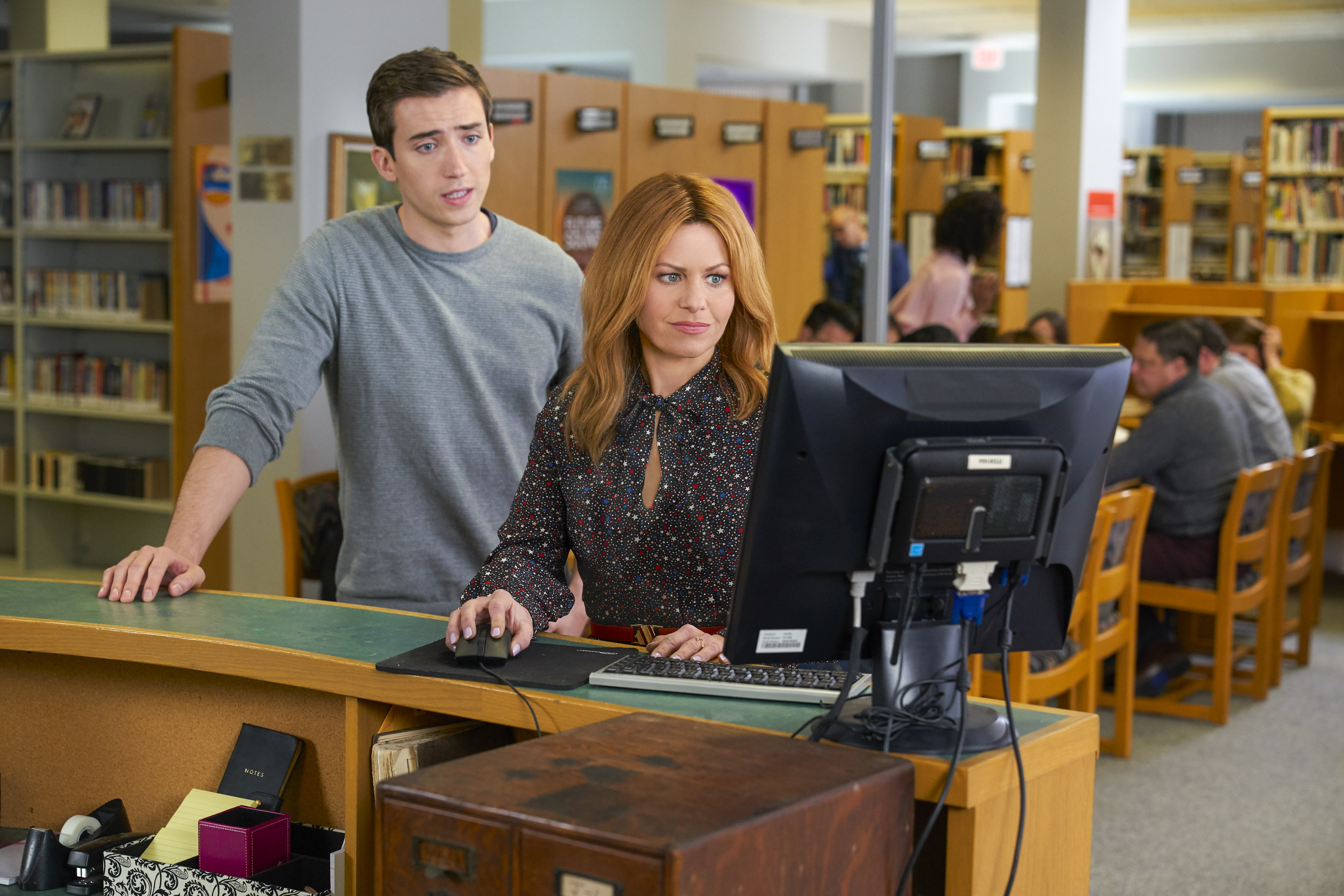 Hallmark Movies & Mysteries is proving how nimble it is this month, backfilling the Garage Sale Mysteries gap in August with three new Aurora Teagaren installments and a new Chronicle Mysteries. And that’s just the beginning. Every Sunday between now and the end of October, we’re getting brand new Crossword Mysteries, Ruby Herring, Murder 101, and Darrow & Darrow premieres, as well as a new entry, Matchmaker Mysteries, with Danica McKellar and Victor Webster as part of a Signature Mysteries premiere event.

First out of the gate is tonight’s return of Aurora Teagarden with the premiere of A Game of Cat and Mouse. This time around, Candace Cameron Bure‘s titular Aurora finds herself in the uncomfortable position of being the center of the mystery, targeted by a successive series of attacks that seem to be escalating toward a rather dire conclusion.

It’s fun to welcome them all back in a mystery that works on a super creepy level as each incremental attack is threaded to the previous one with a clue to the next one. That’s a chilling but effective hook. These were shot last winter so look for an awesome collection of coats (my weakness), too. After tonight’s, premiere, two more installments follow.

In An Inheritance to Die For airing next Sunday, Sally’s aunt is poisoned during a family wedding reception and Aurora vows to get to the bottom of the crime, especially when her mother, a friend of the dead woman, stands to inherit the bulk of the massive estate. With help from her new beau, Nick, and her Real Murders Club regulars, Roe won’t stop until she brings the killer to justice…or dies trying.

On August 18th, in A Very Foul Play, Aurora and her Real Murders Club appear in a stage production while attending a weekend event with murder mystery and true crime fans. When a very real murder is committed on stage during an unplanned blackout, Aurora’s nephew, Phillip, becomes the prime suspect after he’s found holding the murder weapon when the lights come back up.

It’s nice to have these familiar, friendly Aurora Teagarden faces back with a new batch of mysteries–which brings them to 12 films. For folks who still miss Yannick Bisson as Martin, I get it, but logistically, he already had, and still has, a Toronto-based day job in Murdoch Mysteries (The Artful Detective on Ovation in the US), so I’m guessing his availability was limited to continue in the role beyond the five movies he did. I adore Niall Matter, a proven Hallmark favorite, and his character, Nick, is a great fit for Aurora in these new movies, so I hope fans will enjoy them and appreciate that it’s OK for Aurora to find someone again.

Auora Teagarden airs tonight and the next two Sundays at 9 pm/8c on Hallmark Movies & Mysteries. Tonight’s premiere of A Game of Cat and Mouse will also simulcast on Hallmark Channel. Here are a couple of sneak peeks.

City on a Hill Preview: "High on the Looming Gallows Tree"

The Flash Preview: “Family of Rogues”