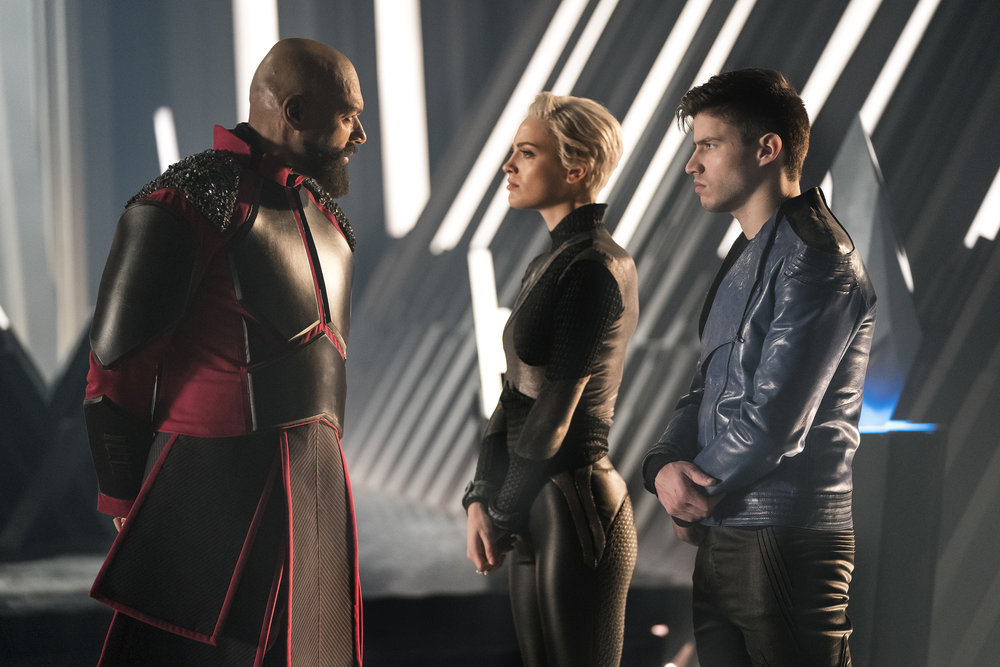 I certainly don’t mind having my theories blown to bits when it’s done this well.

We start the episode with what seems like a flashback to Lyta and Seg’s early courtship. Seg suggests that they run away from Kandor together and start a new life together in Kryptonopolis.

And she agrees. Then Seg manages to reclaim the sigil of House El AND gains Jayna’s endorsement for them to bind together officially. So now we KNOW this isn’t a flashback. But what is it? A parallel dimension? An alternate history? A Phantom Zone quirk? Seg’s delusional day-dreaming?

But Seg isn’t asleep. He’s fixated on having the computer in the Fortress of Solitude scan for Brainiac’s ship so he can track down baby Jor-El.

(Being Seg, it doesn’t seem counter-intuitive to him at all to be scanning for Brainiac with the A.I. matrix that Brainiac JUST infected and probably reprogrammed to cover his trail.)

When Nyssa finally breaks through his loop of madness, the new plan is to get to Wegthor and talk to the real Val-El about how to track down Brainiac.

This plan gets sidelined when Jayna and Dev arrive and inform them of the imminent launch of Dru-Zod’s fleet, destined to destroy the rebel resistance on Wegthor.

Back at Zod Central, Dru is frustrated that his head scientist cannot seem to come up with a way to bring Doomsday to heel. When she explains that Doomsday has an immunity for every psychotropic substance known on Krypton, Dru suddenly remembers he has one that is NOT from Krypton — the Black Mercy.

And, oh yeah, he’s been using the Black Mercy to keep his own mother in a fantasy-driven coma for MONTHS. Which means Jax-Ur executed Lyta’s CLONE on a global broadcast for all to see.

The fact that no one seems to bat an eye at the fact there was a fully-grown, completely synaptically reconditioned clone of the Sagitari Primus running around for months — training soldiers, issuing commands, and even having sex with Seg — is possibly the only glitch in this plot development.

So now we know what the “flashback” scenario is — Lyta’s Black Mercy-induced fantasy. It is how she dreamed of her life turning out. Everyone happy and her bound to the man she loves.

Dru’s need for a means to control Doomsday outweighs his preference that his mother remain happy (and unconscious) and he orders his scientist to extract the neurotoxin secreted by the Black Mercy so that they can use it to act directly on the pleasure center of Doomsday’s brain.

The extractions disrupt the Black Mercy’s effect on Lyta and her fantasy starts to glitch out and she eventually breaks through and out of her imprisonment. Conveniently, she wakes up alone and is able to recover enough to fight off guards she encounters.

Meanwhile, Dev, Jayna, Seg, and Nyssa have broken in to sabotage the fleet. Seg and Nyssa give themselves up as a decoy for the Sagitari but Dru isn’t fooled.

What he doesn’t count on is his mother joining up with Jayna and Dev.

When they meet up, we finally get a piece of the puzzle that’s been missing since the premiere. While in the Phantom Zone, Seg saw Dru attacking Lyta. Later, when Dru attacked Seg in a similar way, I’d thought that what Seg saw was only a possible outcome, that he had taken Lyta’s place in the encounter. However, we find out from Lyta that Dru’s attack actually happened and that was when he first administered the Black Mercy to her.

While they’re reuniting, Seg and Nyssa are in a holding cell, awaiting Nyssa’s reconditioning procedure. Seg takes the opportunity to pledge his eternal devotion to her and their child. *Total eye-roll from me.*

Of course, the moment they are rescued and Seg and Lyta see each other again, that pledge seems completely forgotten.

Sigh. I love Nyssa but they are totally setting her up to become either a martyr or a villain.

So, with two episodes left in the season, we finally see the main players all moving into the same arena. Dru will take his fleet (and possibly Doomsday too) to Wegthor to confront Val-El. Seg et al will probably find a way there too and Seg will (hopefully) realize the best way of tracking Brainiac is to contact Lobo.

That’s a lot to wrap up in two short hours.

Of course, they left us last season with Seg trapped in the Phantom Zone so who am I to assume they’ll bring anything to a satisfying conclusion this season?

The Leftovers “The Book of Kevin”

The X-Files “My Struggle II” Leaves a Wicked Cliffhanger