Krypton Gets Its “Zods and Monsters” Confused 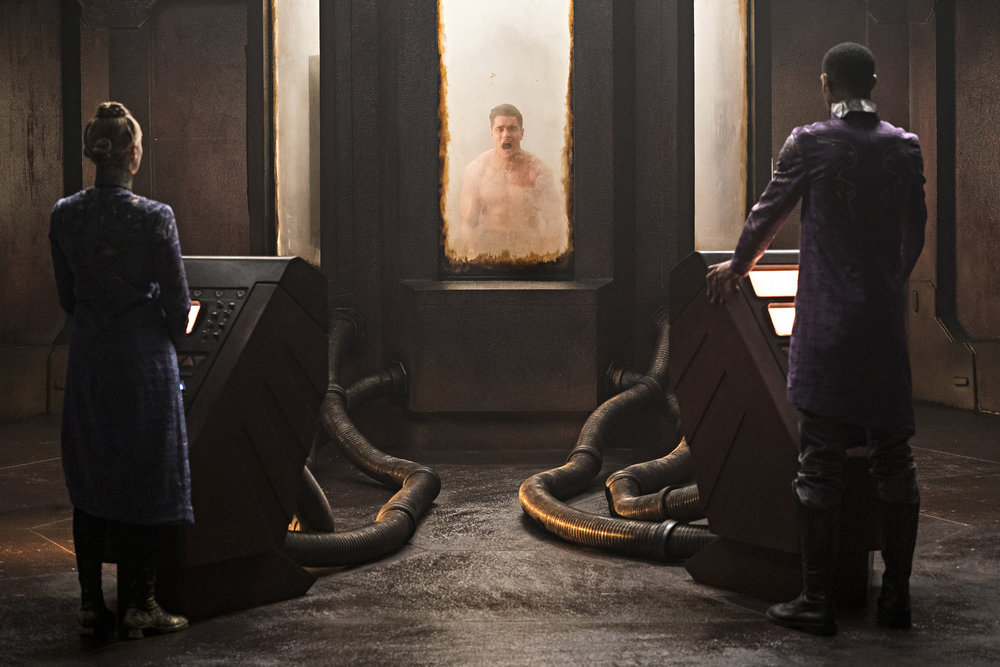 Oh, for the love of Rao.

I’m all for simplifying convoluted plotlines (and Krypton’s been a repeat offender of some serious kitchen-sink writing) but when they throw galaxy-sized overly-simplistic deus ex machina shenanigans into the mix, it does nothing but make it an even bigger muddle.

Let’s start with the good before we get into the bad and the ugly.

Kem, in command of a rebel mission to track down the hidden Sagitari, was everything a proper military leader should be. Confident, prepared, and thinking about the human cost of war instead of rushing into armed conflict.

Despite Adam’s skepticism and the forward scout’s (Seyan Sarvan, Spin State) trigger-hangry nature, Kem sticks to his plans and protocol and brings back the Sagitari, newly recruited for the cause because of his caution and thoughtfulness, without a single casualty.

Seriously, where do I go for my Team Kem t-shirt?

On to the bad. Dru-Zod + Doomsday. Do I really need to explain what a B-A-D idea this is?

First of all, yay for Dru that his new toy managed to subdue Doomsday. At the same time, too bad since that means that it’ll never work on him again.

Then there’s the whole nasty, thousand-year-old backstory where Wedna-El (Toni O’Rourke, Cold Courage) and Van-Zod (Dempsey Bovell, The Missing) go about turning a volunteer Kryptonian, Dax Baron (Staz Nair, Game of Thrones), into Doomsday by killing him HUNDREDS of times.

Forget the fact that this is a MUCH more palatable origin story than the one I found on the Internet.

Forget that he went through all that and then the noble purpose for which Wedna and Van insisted he was needed — ending the Krypton civil war — was resolved while he was still being killed and mutated to a perfect level of invulnerability.

What the real kicker is here that Dax had a wife, Enaj (Danielle Galligan, Game of Thrones) and a daughter (that mention feels like an on-ramp for the Cythonians). He still retains those memories from a THOUSAND years ago, from before he died over five hundred times, from before he was cryo-stored for almost a thousand years. Dru-Zod zeroes in on the power of those memories and plans to use them to “control” Doomsday.Paragraph

That is going to be a real trick since Doomsday in canon hates ALL Kryptonians. This Doomsday probably hates Els and Zods most and since Dru is BOTH…

And when did the Els and the Zods pass the moral conscience between the houses? Wedna is far more like Dru in her brutal pragmatism while Van is clearly Val’s ancestor in terms of having a sense of right and wrong.

So here we have yet another over-simplistic solution to the problem of freakin’ BRAINIAC being embedded in Seg’s head. At least Nyssa is (initially) smart enough to realize how stupid the idea of her wielding a sonic scalpel on Seg nanites is.

Seg, that was a lovely speech but that is not going to help me slice you open and remove an alien parasite. Be realistic.

And yet, somehow, she still gets talked into it. And it’s somehow a success. And then, SOMEHOW, no one — not Seg, not Nyssa, not the super-intelligent A.I. version of Val-El — thinks twice about leaving the Brainiac nanites on an access point to the entire Fortress of Solitude’s computer system. No containment field, no stasis chamber, not even a petri dish.

And then the big reveal. Nyssa, disillusioned with her family legacy, relents on her insistence that their son carry the Vex name. So Cor-Vex becomes Cor-El (insert bad computer science/software joke here) but not for long. Because the House of El is all about tradition, A.I. Val puts it forward that the baby gets an entirely new name, except not. He gets Val’s dad’s name. And suddenly, we have Baby Jor-El, aka Superman’s dad.

Which makes it that much worse when Brainiac steals him away.

I’ve never liked child-centered plot crimes. It’s a cheap and horrifying way to pull emotional strings. Krypton did this in Season 1 with Ona and that was a terrible business.

It’s also brutal how they just keep on piling on to Nyssa. Her father’s dead, she doesn’t know who she is, she’s betrayed friends (and a lover) to get her child back, she’s just performed BRAIN SURGERY on the only man she trusts and cares for, and now the kid’s been taken AGAIN.

Honestly, I’m a little frustrated right now while still interested in seeing how they manage to unravel all the issues in play.

Killjoys Preview: "Blame It on the Rain"

The Last Ship â€œTwo Sailors Walk into a Barâ€