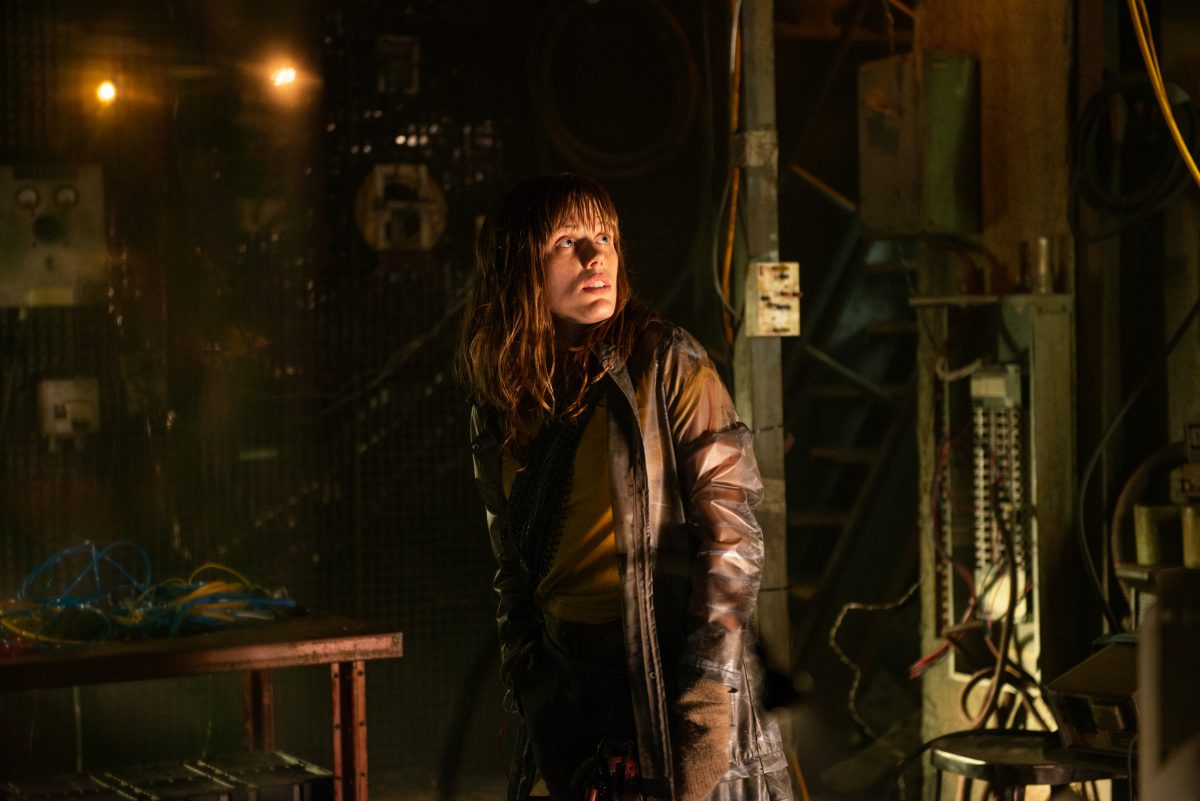 We’re a week away from the return of Killjoys and next up from my set visit goody bag, Kelly McCormack gives us a sneak peek at her Season 5 reboot as “dirty raincoat Zeph.”

This season, Zeph finds herself apart from everyone in a dark, dank lair fit for a brainiac/conspiracy theorist, and McCormack loved it. “It’s the best set that I have ever stepped into in my life,” she says. “Zeph has become a little gremlin street rat. Sweaty, dirty stinky.”

“The lair is great. The art department went all out. The detail’s insane. I’m in that lair for a long time. One day we lost AC in the studio and it was like 500 degrees. It’s incredible. It’s a playground of mess and I’m like pigpen from Charlie Brown. I actually prefer being a messy character actor than being clean. Give me a pound of dirt and a disgusting [environment any day].”

She adds that she felt her character had a kinship with Labyrinth’s Hoggle, and she asked for a chain to collect totems that then became its own thing. “In the [wardrobe] fitting, I was like, ‘I feel like stinky raincoat needs a Hoggle like thing [for everything] she’s collected,” he laughs. “I wore that for a really long time and it’s so annoying and [I’m sure the sound department thought], ‘Thanks for putting something jangly on your body. That’s helpful.’”

McCormack credits the writers with retaining everyone’s personalities within the character resets. “The writers did such a thoughtful job of trying to figure out what is innately you, that you’ve kept. If your mind gets wiped, it’s like you’ve chosen another path,” she explains. “You yourself are still the same but you’ve chosen another direction.”

“Stinky raincoat Zeph is still obsessed with science, but what’s beautiful and was really fun to play is that no one knows she’s smart, so she’s like this wacky conspiracy theorist with no friends. She’s like the woman in Sweeney Todd. I get to prove myself again. She’s like Zeph with no approval or who hasn’t showered or eaten properly in a while.”

She was also thrilled that the creative team gave her a lot of rope. “So they said, ‘Kelly, you can dial it up.’ I was like, ‘OK…’ I was joking [before this] that Zeph needed a makeover and…it’s been a joy. Every director has said, ‘Do what you want, we’re going to shoot wide.’ The writers are having so much fun, it’s stupid. They’re just going for broke [because it’s ending]. We’re reading scripts and it’s like, ‘Whoa, OK let’s say that.’”

As McCormack has discussed with us before, she’s extremely grateful that the show just gets her. “The synchronicity with the writers, with the actors, is like nothing I’ve ever experienced. Season 5…so much happens,” she shares.

“There have been two times where I’ve read the script and started crying because I thought, ‘How could I have been so lucky for people to see me so clearly?’ [The writers just know], ‘Kelly will get this. Kelly wants to say this stuff. This is how Kelly thinks about this world. Let’s give her this moment.’ It’s so hard. I can’t believe it’s ending.”

“Creatively, we’re all playing dress up. I really enjoyed turning Zeph into this other person. I like looking for the acorns of where Zeph lies and what hasn’t changed in her new personality. They speak to her journey and her life. The writers do such a good job on nature vs. nurture and who are your found family members. It’s been this beautiful paring back of [figuring out] what are the innate qualities of a character to play?”

When Zeph meets Dutch again in Season 5, McCormack says the girl crush is still 100% intact. “[Season 5 Zeph] is chilling, she’s got her own life. She’s got a conspiracy board and she’s on her own wavelength. In walks this woman who thinks she’s so smart,” she says. “There’s no stakes for Zeph [when Dutch shows up] and she’s like, ‘Who’s my hot new friend? Why are you friends with me and why do you smell so good?’ That was really fun to play.”

“It’s Dutch who makes her see she’s not crazy and she’s really smart. It’s a tiny moment for stinky raincoat Zeph. It’s a metaphor of the Zeph we met in Season 3 who [Team Awesomeforce made realize she is awesome]. It’s amazing.”

Killjoys begins its final season next Friday, July 19th, at 10 pm/9c on Syfy and Space Channel. Come get your countdown Tweet on with the fans and creative team. All of our Killjoys coverage is here, and you can catch up on all four seasons on demand on the Space Go app and Syfy app and website.

If you’d like an Italian travelogue, check out McCormack’s Insta feed for pics from her gorgeous summer holiday–a well-deserved respite after filming her passion project, the upcoming indie film she wrote and starred in, tentatively titled Sugar Daddy.

Krypton Dreams of "A Better Yesterday"