City on a Hill Preview: “The Wickedness Of The Wicked Shall Be Upon Himself” 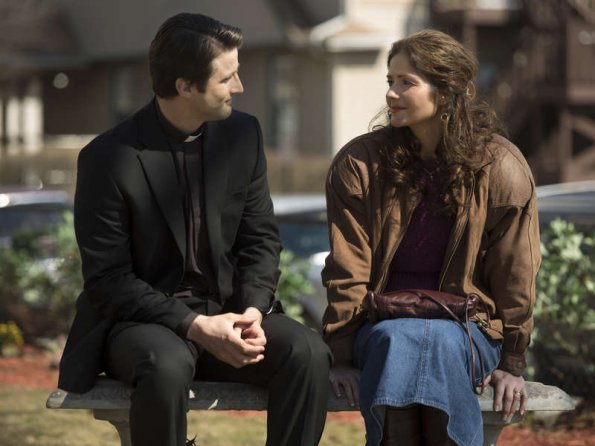 Decourcy and crew play out their gamble this week on City on a Hill as the Ryan family deals with some internal drama of its own and Rohr is knocked down a peg.

Siobhan is faced with a dilemma about the minister that rounds back to Decourcy and his previous conversations with law enforcement about alliances necessary to avoid racial upheaval. He’s also focused on his grand jury and how to lead the questioning based on tainted intel, without tipping his hand that that’s exactly what he’s doing.

Rohr finds out he’s human after all when he’s rebuffed at work and then roughed up on the street. At home, he throws a wrench in Jenny’s attempt to expand her horizons beyond their household and shows just how far his reach extends.

Jimmy makes it back to Boston, which brings some questions of the who/how/where/when variety. Frankie gets rattled when the grand jury threatens to blow back on him, and he and Cathy disagree on the best path forward for the still nightmare-plagued Kick.

Look for a couple of terrific scenes from Amanda Clayton as a defiant Cathy meets with Kick’s teacher (Haviland Morris). She desperately wants to help her daughter but is limited by the realities of their family business.

Jill Hennessy is also aces playing the full range of Jenny’s emotions. Bounced between her nervousness and excitement at new possibilities and being quashed by the same old BS, she’s maybe finally pissed off enough to no longer accept the path dictated to her.

“The Wickedness of the Wicked Shall Be Upon Himself” was directed by Hagar Ben-Asher and written by J.M. Holmes (another terrific first script credit). City on a Hill airs Sundays at 10 pm/9c on Showtime. Here are a couple of a sneak peeks of this week’s episode.