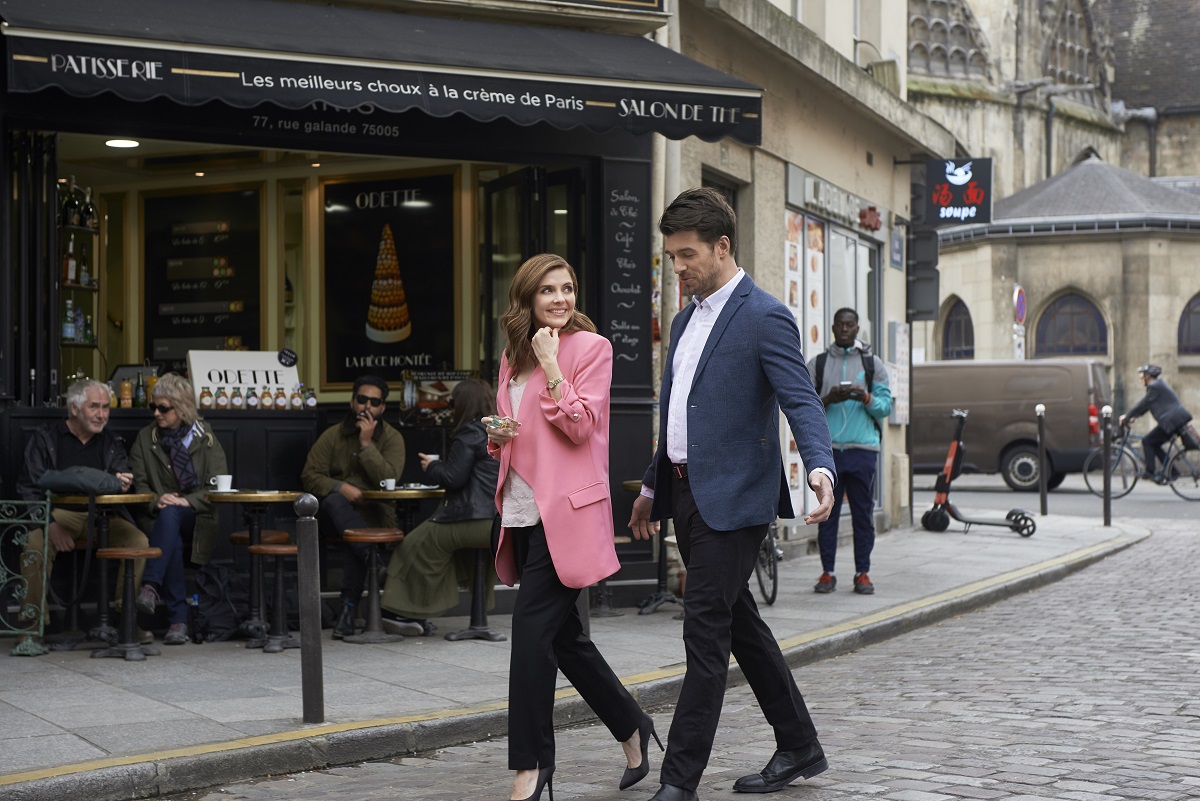 Hallmark Channel returns to Paris for a springtime, wine-themed romance this Saturday in Paris, Wine & Romance starring network fave Jen Lilley and The Bold Type‘s Dan Jeannotte. I chatted with Lilley last week about the new project, which filmed on location in March.

Part Parisian travelogue (including scenes of Notre Dame), part romcom, the film follows Oregon boutique vintner Isabella (Lilley) to Paris when her uncle enters her new pinot noir in a renowned international competition and it’s selected as a finalist. Bewildered but emboldened by the PR opportunity, she makes the trip and reconnects with her expat pal, Lacey (Roxanne McKee).

She also falls into an easy new friendship with her chief competitors, the brothers Jacques (Jeannotte) and Maurice (Michael D. Xavier) and their mother, Margot (Lolita Davidovich). That complicates quickly when she and Jacques develop a deeper connection beyond making prize-winning wines. The teleplay is by Alex Wright (Love on the Menu), based on the original screenplay by Joelle Sellner (Love on the Vines). Alex Zamm (Netflix’ A Christmas Prince) directs.

Lilley was overjoyed to get the offer for the film, and she admits that when it came through, she was mid-production on another upcoming film with her frequent collaborator, director Christie WIll Wolf, and her focus quickly shifted. “I read the script and loved it. It was so cute. I was crying in my hotel room. Never in my wildest dreams did I think I’d get to go to Paris for work,” she says.

“When they sent me the script, I told Christie I was already prepping for another movie, and she laughed. I don’t speak French and I [can’t pronounce] all the wine names [so I had to do a deep dive]. I took Spanish and Italian, and I thought, ‘I’ll take French.’”

It was a bonus for Lilley’s learning curve that the bilingual Quebecois Jeannotte was cast opposite her. “I got the Rosetta Stone, and French is hard. I can’t figure out the patterns and consistencies [in the language]. When I found out Dan was cast, I thought ‘Oh, thank God. Dan will tell [me things],'” she laughs.

Lilley loved the locations, the cast, and of course, the food, and was grateful for the care the crew took in making sure the on-set munchies were safe for a pregnant mama–she’s expecting her first daughter this summer. “Our production team was really great. We have a scene in front of the Eiffel Tower, and it was scripted that we were eating brie,” she explains.

“As a pregnant woman, you can eat brie if it’s pasteurized, and they found that for me. And all of the actors were really exceptional. Supporting actors sometimes fly in and fly out and the vibe might change [with each arrival and departure] but we got along really well.”

The film marked Lilley’s first project with Zamm, and she was impressed with his ability to navigate the many threads of managing an international film, especially since she plans to direct someday. “He is incredible. He is so good at directing actors and directing his crew and he’s exceptional at setting up his shots,” she shares.

“[Directors] are responsible for all of that, but it’s unusual that they can do all three [really well]. There’s always a missing link [in one area]. He’s so talented and so kind. For me, the real highlight and takeaway was working with him. I love him and couldn’t say enough things about him as a person and director. He blew my mind. I told him after all my kids are born and potty trained that I wanted to shadow him.”

When Lilley was studying film acting, she also worked on film crews, and credits that experience for her deep appreciation for the craft of filmmaking. She loves the idea of a director having ownership and the final say, and being the ultimate storyteller. “At the end of the day, the director’s the boss. I think [all creatives] worth their salt, they’re telling a story, We love the art of storytelling,” she points out.

“I love cinematography and the way a shot is set up. As a director, it’s such a privileged position. There are a lot of roles where I could act, but audiences might not buy me [as a character]. As a director, it’s like you’re playing every single role because you have to put your mind inside their brains, but you have all the right people cast in the roles so they’re believable and the audience can suspend disbelief. It’s a delight to me to have your hands in more than one character.”

Game of Thrones "The Long Night"