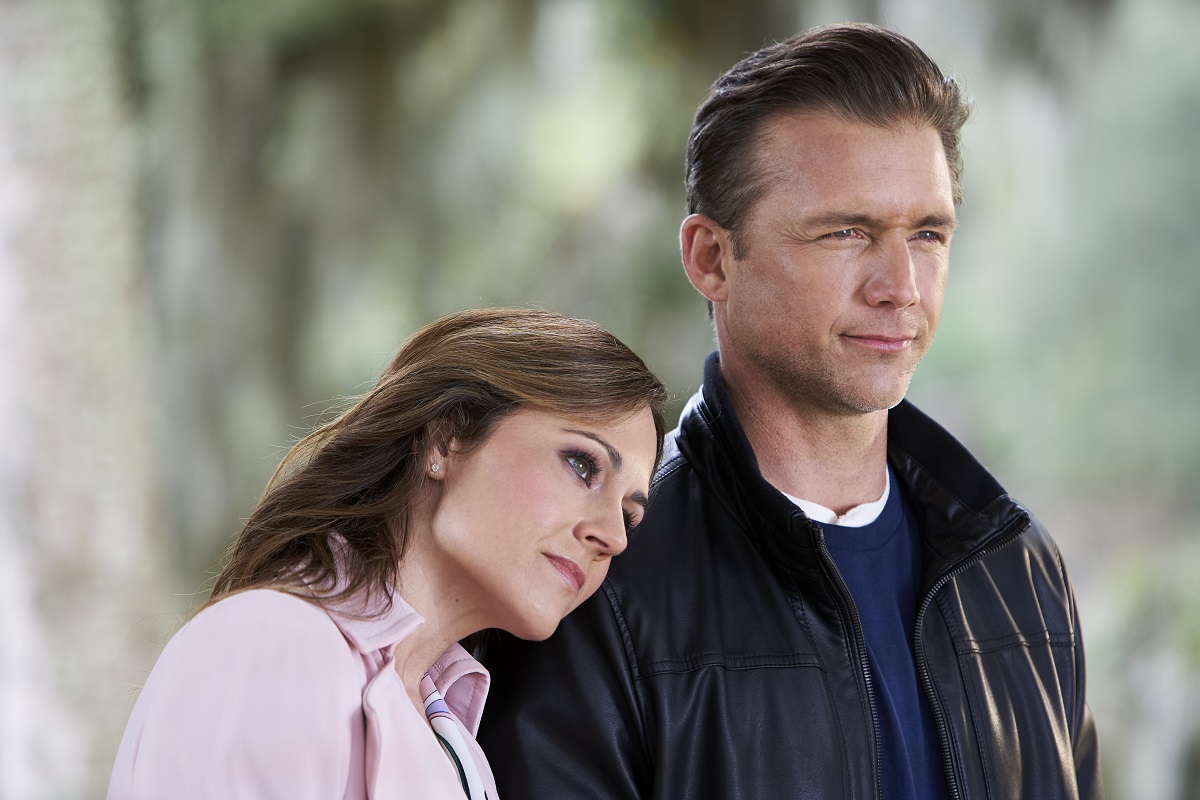 Just a month and change after Hallmark Channel’s Love to the Rescue, Nikki DeLoach returns Saturday night in the newest Hallmark Hall of Fame presentation, Love Takes Flight. We love that she’s back so quickly, and are doubly thrilled that the network recruited Jeff Hephner as her co-star. If you’ve been around for a little while (thank you!), you may recall that I was all in on TNT’s one-season wonder Agent X (which is now on Amazon Prime) and I love that Hephner has joined the Hallmark fold.

When I chatted with DeLoach for Love to the Rescue, she was in production on Love Takes Flight, and we talked about the movie, her ongoing partnership with director Steven R.Monroe, and making her first HHOF film. DeLoach plays hospital administrator Lizzie, who forewent a successful OB/GYN practice for a more stable schedule when she became a single parent to her daughter, the precocious Quinn (Skylar Olivia Flanagan).

After a meet-cute in a grocery store with the Walter (Tom Thon), an elderly man still recovering from the loss of his wife the year prior, an unlikely multi-generational friendship is born that’s just what the mother and daughter, and Walter, need. At work, Lizzie is trying to land a prestigious transplant surgeon and her cutting-edge procedure for the hospital, and the grant money that would come with her. She has everything in place to properly pitch her hospital, except a pilot.

Enter Charley (Hephner), a former combat pilot who’s all cavalier swagger, so he and Lizzie of course immediately butt heads. Until a personal wrinkle adds a layer of complexity that makes it difficult to maintain that animosity for long.

It’s a really sweet, thoughtful story about cultivating friendships, even, and especially, the ones that surprise you. The whole cast, which also includes Barbara Niven as Lizzie’s mom, Virginia, Caroline Arapoglou as her sister, Barbara, and Bisserat Tseggai and Brandon Quinn as Felicia and Todd, two of Lizzie’s staff who are secretly dating, are terrific.

DeLoach was thrilled to get the offer for the movie, which kept her in Savannah right after Love to the Rescue wrapped. “I cannot even begin to tell you how honored and humbled I was that they asked me to do this. The Hallmark Hall of Fame brand is one of the most awarded and longest running series in the story of TV,” she says.

In the film, DeLoach plays the other side of her carefree Love to the Rescue character. “She has a lot of boundaries and a lot of walls. She doesn’t agree with mixing work and home. In comes Charley, who’s never seen a rule that doesn’t need to be broken. They are instantly oil and water–or love and magic. They just don’t mix at first. Then the day comes that they have to pull together and combine their skills to save the life of a patient.”

“What’s really beautiful is [that] the inspiration [for the script by Eric Books] came from a true story. It was a You Tube video that went viral. This older man was in the grocery store and there was a mom pushing her five-year old daughter around the store,” she explains.

“Unbeknownst to them, he had lost his wife about a year prior and was severely depressed and on the verge of giving up. And this five-year old says, ‘It’s my birthday, and I would like a hug, and will you be my friend?’ And she gives him a reason to go on and keep living his life. That’s where our story begins.”

“It speaks to the themes of finding friendship in the unlikeliest of places and having the courage and vulnerability to open yourself up. Everyone in this movie is dealing with some sort of fear.”

“Lizzie is dealing with the fear of her daughter’s insulin disorder and trying to live a very structured and rigid life to make sure she dots all the I’s and crosses all the T’s and does everything for her daughter. She went through a divorce with her ex-husband. She’s been closed down to having someone in her life.”

“Walter hasn’t been able to move on, and Charley hasn’t, either. Tom Thon gives the most beautiful performance in this movie and I can’t wait for people to see him in it. Jeff [Hephner] is tremendous in this. Everybody is dealing with these walls and boundaries they’ve built and all of them learn to open themselves up to the possibility of love, and friendship, and for Walter, living without his wife.”

Game of Thrones "A Knight of the Seven Kingdoms"