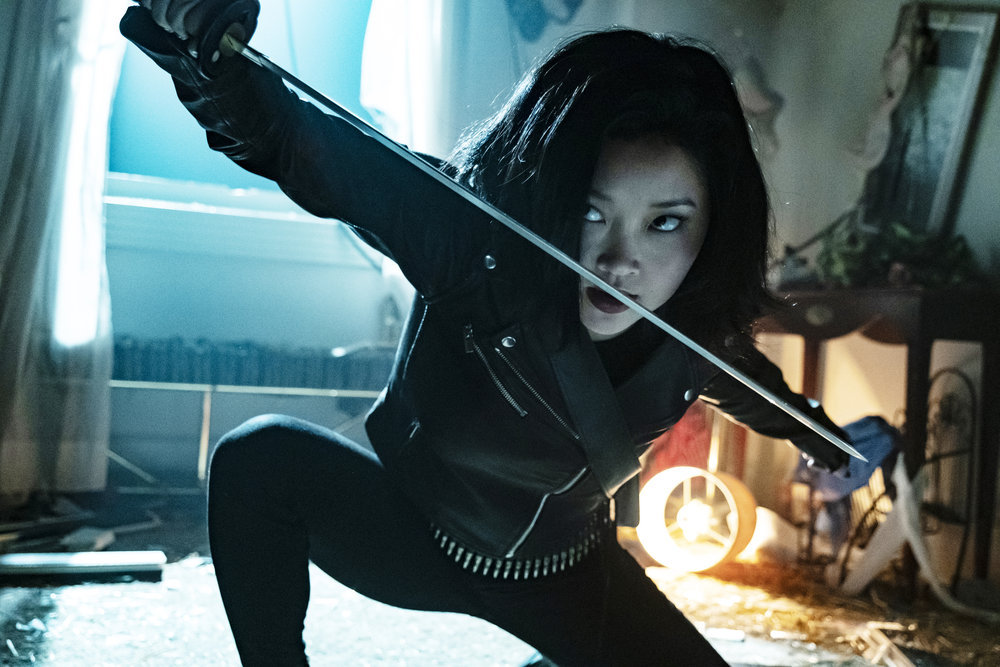 Well, that was probably the bleakest finale I’ve seen in a long time.

I have to admit my standard for finales is high for quality but, honestly, you don’t have to tick a LOT of boxes for it to be passably satisfying.

Primarily, it kind of needs to bring something to a conclusion. In the case of Deadly Class, the ONLY thing that gets a fork stuck in it is F-Face.

But not literally. That was Maria and she was infuriatingly annoying-crazy throughout this episode. From antagonizing Billy and Petra to picking the moment they are all in imminent danger to confront Saya about Marcus, this is a portrait of a woman with mixed up priorities.

And she even derails what should’ve been a closure scene with Marcus by getting offended by being referred to as an obligation. Teenage girl ego meet killer-in-training. Please pick a lane.

Getting Chico’s head was the entire point of the assault on F-Face’s stronghold. But we’re left hanging with Marcus holding the head when Diablo’s men catch Maria and him leaving Shabnam’s house. (Also, R.I.P. Lex.)

Weird aside: Assuming that when Shabnam tells Gao,”I know where they went” he’s talking about Marcus et al, shouldn’t he be a bit more freaked out that his classmates are planning to lay siege to his childhood home?

Back to the core cast.

Saya’s walkaway SHOULD have been satisfying. Her realization that her involvement with the Rats and friendship with Maria have made her vulnerable in so many ways has been a long time coming.

The sense of family she calls upon in her pep talk before they set their plan in motion is history once Maria launches at her with fan blades out. What’s tragic here is that the family she leaned on before she brought Marcus back to Kings Dominion — Master Lin — is either dead or pissed at her for abandoning her post as his family’s guardian.

The pursuit of Lin through Chinatown (and I found his army of butchers extremely impressive) was the hardest conflict to watch. How Nahia managed not to catch a bullet is surreal.

I’m uncertain as to the identity of the passed-out addict who jumps up to fight Diablo’s men. Convenient, yes. But, unlike the butcher army, how does one arrange to have a guy playing unconscious in a crack house on the off-chance you get chased and cornered by a murderous cartel?

And then, to have Lin make it to his office only to have his daughter ripped away from him… sigh. I have a hard time with scenes involving small children. It’s emotionally manipulative at best. And, in this case, so immensely unresolved as to be painfully ambiguous. We don’t know what the Temple’s “Great Exam” or where it takes place. Is it the same as the Finals that Jürgen warned Marcus about?

Right, Marcus. Besides demonstrating better technique with that nail-headed bat than I expected, he never gets a chance to talk things out with Saya, screws up his talk with Maria, and goes back on everything he B.S.es at F-Face.

It’s problematic when you start to dislike the main character. When the series started out, Marcus was our Muggle in a Strange Land. He was a wild card. Sure, he had issues, but he was making friends. He was enjoying (?) classes.

Somewhere along the way, possibly after Vegas, he started getting more self-righteous and pompous. He is a lot of talk and bad choices. Saya calls him out about his prejudice against slam-dancing. Willie and Viktor call him out on it during “The Clampdown” and his confrontation with Master Lin then about walking the walk seems weirdly rehashed in his talk with F-Face here.

Petra and Billy get a bit lost in the battle. I honestly would’ve understood if they pulled a Willie and got the hell out of there. It was an overly-ambitious, terribly researched attack plan. They had every right to freak out.

Sigh. As episodes go, this one was in keeping with the ones that came before it. As finales go, this was severely underwhelming.

I deeply resent having the resolution of multiple narratives — Maria, Saya, Master Lin, Willie — being held hostage for viewer numbers for next season. However, at the moment, I’m curious enough to come back to see how they play out.

Or maybe I’ll just read the graphic novels during the hiatus.

At time of publishing, Deadly Class has yet to be renewed for another season. Stay tuned for a Syfy announcement.

Lost Girl “End of a Line”