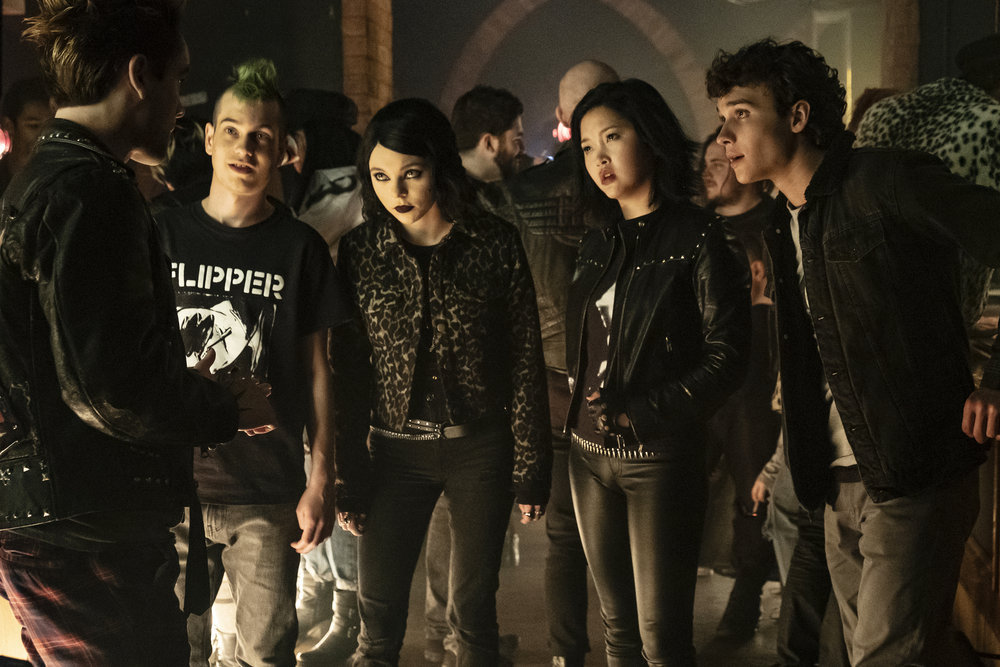 We’ve been waiting so long for the final showdown with F-Face that I felt a bit cheated here, being left at the doorstep of that battle.

The overwhelming theme of the episode was one of choice and consequence. Marcus, Master Lin, Saya, and Willie all make hard decisions which lead to devastating circumstances.

If you love someone enough to die for them, you surely will.

Master Lin’s decision to move on his sister illustrates that King’s Dominion’s head has some strategy skillz. Brandy Lynn and Viktor’s seeming defection to the Guild mistress on “The Clampdown” turns out to be the first move in planting his baby assassins close to her.

It also gives us a glimpse into what all the human furniture does when Gao’s out of the room.

It leaves Shabnam as the only rat, ironically, in the school body. Part of me feels a bit bad for him, considering what’s been going on at home, unbeknownst to him. When his father gets impaled on a booby-trap while trying to escape after F-Face performs a family concert serenade of “Shandy-Man,” it’s almost a relief to know at least one of the prisoners’ suffering has ended.

Of course, another part of me finds his behavior and attitude completely reprehensible. Because they are.

Willie’s decision to walk away from the fight is probably the most sensible choice made by any character on this show. Ever.

Not that it isn’t a difficult one. He’s running from his own gang as well as his friends. He’s always been a fish out of water among the assassin kids with his secret passivism.

There’re many causes I’d die for. There isn’t a single cause I’d kill for.

Marcus puts a fine point on it, asking straight-up if he’s really ready to just stand aside as the people he cares about possibly die fighting F-Face and his posse. As he and Gabrielle drive away from a man being beaten and robbed in front of his screaming children at the gas station, the parallel is obvious.

In other news, this may be the first time I’ve ever heard of a character running away to Los Angeles for a “fresh start”.

Saya’s life has never been uncomplicated, it seems. We find out that her father’s dead and that Lin took on responsibility for her after that, protecting her (one assumes) from her brother and his regime.

In planning an attack on F-Face, she’s again leaving her legacy clique behind in order to fight with the King’s Rats. Mostly, though, it’s putting her in close proximity with Marcus.

Their relationship has been the center of a lot of the tension within the group, considering he’s supposed to be dating Maria and Maria’s sanity is constantly being called into question since killing Chico (and Yukio and the nameless guy in the club).

So jumping his bones after the slam-dancing Adolescents’ concert is an extreme move especially on the eve of their F-Face confrontation.

Lost a bit in the jumble of preparation for the F-Face fight is her choice to walk away from the guard duty Lin puts her on. The consequences for that are tragic and obviously she’ll have to face that (and Lin) in the season finale.

Marcus’ choices are less momentous than others. There’s the risky one to head to the club when Maria specifically asked him to stay with her. There’s the poor, slightly inebriated one to hook up with Saya. There’s the STOOPID one to eat some stranger’s burrito.

The punk slam-dancing montage was a nice reprieve from the dark business of buying C-4 to blow up Shabnam’s childhood home to smoke F-Face out of his compound.

Not sure of the narrative value of Marcus having such a total bowel malfunction in public but it has been a few weeks since we’ve seen him butt-naked so there’s that, I guess.

Then again, it’s also in keeping with the choices and consequences theme. Seriously, stranger street burrito?

I’d also be a little worried about the explosives in the back of the comic book store with all the foul-mouthed child customers running around.

The finale is shaping up to be a chaotic and epic climax. Gao’s on the loose and Diablo is on the hunt as well. Our Rat Pack is packing C-4 and F-Face’s crew is just a whole new level of depraved.

The Deadly Class finale airs next Wednesday, March 20 on Syfy at 10/9c

Game of Thrones “The Last of the Starks”