Deadly Class Raises the Stakes as “The Clampdown” Starts 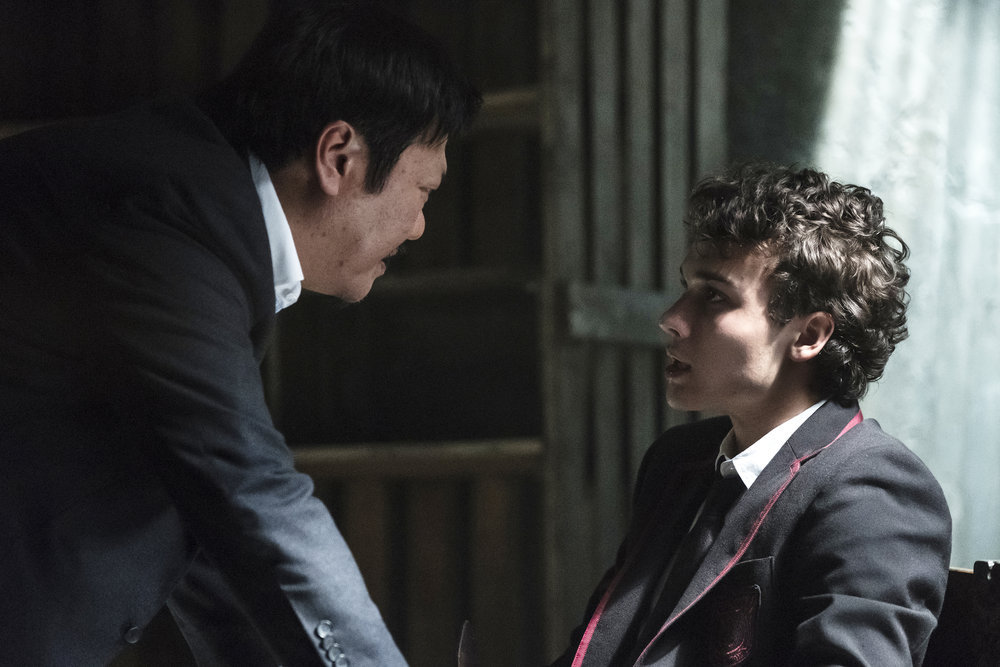 Much of the beauty of the writing of Deadly Class is in the innovative use of old tropes.

They’ve done the Roadtrip, the House Party, and whatever you want to call the Breakfast Club detention one.

Each time, there’s been a little (or not so little twist) on the trope. They weren’t able to leave what happened in Vegas in Vegas because F-Face brought back Chico’s body. The house party is technically still going on even if Shabnam hasn’t figured that out. And the fall-out from detention looks like it’s taken out Maria and Saya’s friendship for good.

But first, we get a mole. Aptly, it’s Shabnam. He’s been going through Marcus’ stuff when his roommate’s not around and brings some of the sketchbooks Marcus uses for journals to Master Gao.

What this reveals to Gao, we aren’t privy to but it’s enough to direct her attention and for her to bring Master Lin into her confidence.

With Chico missing/presumed dead and his father on site, looking for revenge, it doesn’t look good to the Guild for the school to have another student, Yukio, murdered in a club washroom.

While Kings’ Rats are playing a mundane yet philosophically profound game of Monopoly on the rooftop, Saya interrupts to inform them of Yukio’s murder.

Of course, Maria has been the killer in both Chico’s and Yukio’s cases. She admits this to Marcus, explaining that she punished Yukio for betraying Saya to her cousins but scapegoating him for Chico’s murder.

Marcus is quick to point out that Chico’s father won’t be satisfied with the death of the lackey. He’ll want the head of the Syndicate at King’s dead and that Saya.

Sure enough, just as Maria tries to come clean to Saya in the school halls, one of the Cartel’s henchmen, Juan (Juan Grey, Bellevue) makes an attempt on Saya’s life.

Immediately — although technically not because of this — Master Lin and the monks put the school into lock-down, arbitrarily throwing various students into random dorm rooms.

And this is the twist on the Locked in a Room trope. Because there isn’t just one room, there’s multiple where characters of varying animosity get stuck having to talk and listen (or eavesdrop) on each other.

Maria and Juan are locked in with Brandy Lynn. She claims not to understand “Mexican” but she clues into what they’re discussing and makes it her business to stir up the pot against Saya and her crew.

Saya and her fellow Syndicate member, Riku (Doralynn Miu, The 100) get to share incarceration with Shabnam. Riku spends the whole time reminding Saya of her duty to avenge Yukio. Saya swears to take down Juan.

During the meal break, she makes her move but Maria counters. They are both neutralized by Gao and the monks. Gao leaves Saya but take Maria. She tells Maria that although she would usually commend such ruthless violence, she finds Maria’s presence contaminates those around her and she needs to be “cut out” like a cancer.

When Maria is marched away to be locked down, Gao and Riku share a look and Riku is given access to the helpless Maria. Turns out she was really close to Yukio so his death is personal. Saya breaks into the room and orders Riku to stand down.

Riku warns her that she’s chosen the wrong side and departs. Maria is grateful but Saya points out that there’s obviously no trust left between them.

And that brings us to Marcus, Viktor, and Willie locked in Marcus and Shabnam’s room.

Marcus is desperate to get out and broker a peace between Maria and Saya. Willie has a date with Gabrielle.

Viktor is just there to antagonize them both. And to intercept the note Maria tries to send to Marcus.

When Marcus manages to get out, he’s almost instantly taken into custody by Master Lin. Lin’s intent on finding out the truth and, when physical violence proves ineffective, pulls out the stops and plays Marcus’ childhood home videos for him. (No idea how he gets this stuff.)

Marcus eventually divulges the truth about Maria and Chico and Yukio under threat of being expelled from King’s Dominion.

Lin takes this information to convince El Alma del Diablo to accept that justice has been served for Chico. I, personally, don’t have a lot of faith that Diablo is gonna stay okay with that.

Marcus takes his new-found respect for clearing the air to the Rats and reveals that he didn’t kill the boys in the home and that the real killer, F-Face has Chico’s body and has given him a deadline.

The Operatives “The Dolphin Rescue” Post Mortem with Pete Bethune