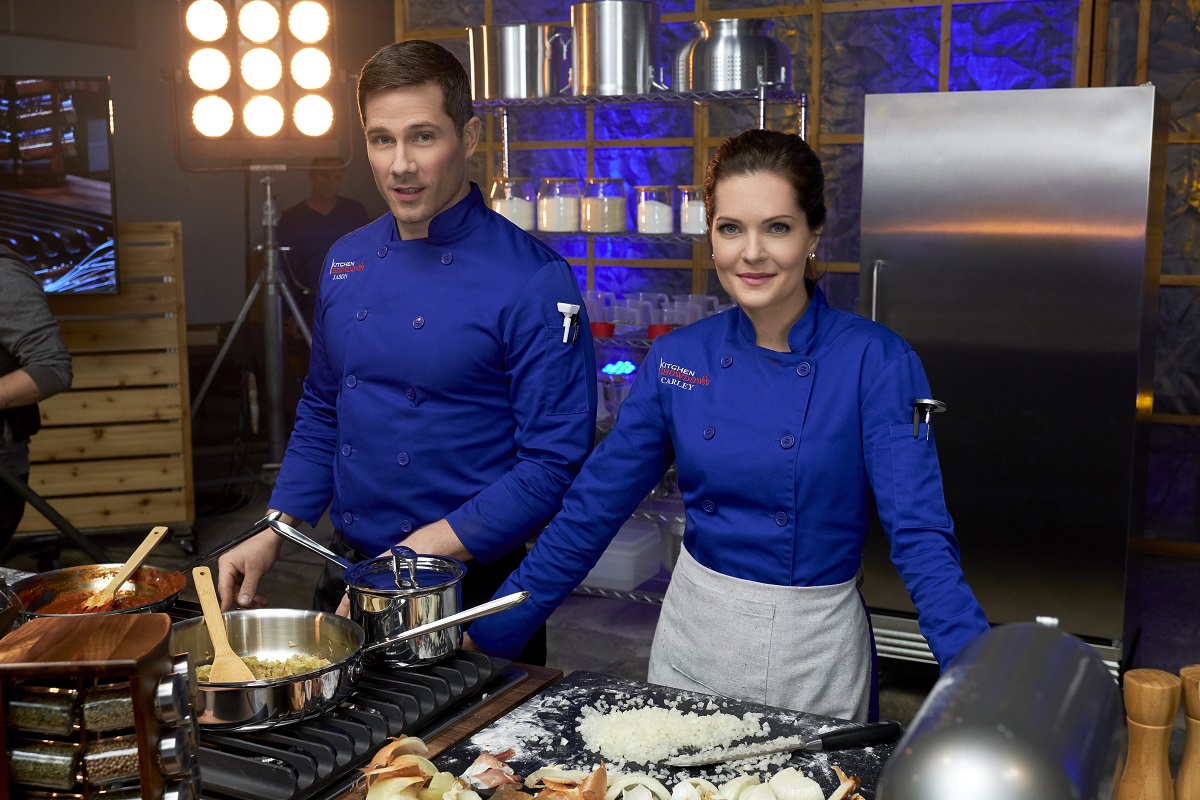 Lucky, lucky us! Three months after the completely charming A Shoe Addict’s Christmas, Luke Macfarlane returns to Hallmark Channel Saturday night in Just Add Romance, delivering a lovely companion to his other non-holiday gem, 2017’s Birthday Wish. I spoke with Macfarlane earlier this week about the project, and got a little tease on the final season of Killjoys.

Starring opposite The Bold Type‘s Meghann Fahy in her Hallmark network debut, Macfarlane plays Jason, a culinary student who unintentionally ghosts classmate and new friend, Carly, when family obligations call him home to Chicago. Flash forward three years, Carly’s now working in Chicago and they meet again when they find themselves pitted against one another in a national competitive cooking show called “Kitchen Showdown.”

They pick up right where they left off, with an easy banter that of course is immediately complicated because they’re competing for the grand prize of a restaurant backed by one of the show’s judges. The film goes off-script a bit, in a fantastic and refreshing way, as the pair admit fairly up front that they like each other and they both want to win, but they can make it work–they hope. They also have to avoid a TV crew that wants to capture their budding romance for the show.

That spin on things was a hook for Macfarlane when he was offered the movie, as was the opportunity to shadow frequent Hallmark director Terry Ingram before and during production. “They think of me [as projects come up] and I think they thought this would be a good match. It worked out beautifully with my schedule. Moving into pilot season and now that Killjoys is done, I really want to be open to other things,” he explains.

“I read the script [by All of My Heart‘s Karen Berger] and it breaks some rules, some of the Hallmark rules, which I guess some of the off-season ones can a little bit. I had heard amazing things about the director. I’ve been learning a little bit about the whole shadowing process, so I asked him I could [shadow on this and he said yes].”

“I went up early before shooting and got a taste of the things that go into pre-production, which I’d never been able to do with my schedule. Before we filmed, I was up in Vancouver with Terry and scouting locations and learning a lot. That was a really big part of the appeal that they allowed me to be part of that.”

“I read the script and thought it was really good and really ambitious. They built the whole kitchen set. It was literally an empty room and they put in a floor and brought in everything. The stoves had to work [so] they brought in gas tanks. It was pretty cool They did an amazing job.”

The film marks the first time Macfarlane has worked with Fahy, and they bonded right away, which is completely evident all over the movie—their rapport is so, so good. “I think Meghan is fantastic and is just the perfect person for this. We met [when we were cast together]. I did not know her. I was aware of her show but hadn’t seen it,” he shares.

“Usually when you shoot in Vancouver, you can go and do your own thing [after work]. It was different [here] because we were out in Langley, so we spent a lot of time with each other. When we got back to the hotel [after shooting], we were in the middle of nowhere so we had dinner most nights. It was really nice.”

Macfarlane enjoyed the kitchen scene work, which was somewhat familiar from his Brothers & Sisters days, but cooking isn’t part of his personal wheelhouse. “I have a nice kitchen that I built but I can’t make anything in it,” he laughs.

“Scotty was a chef, so I was kind of familiar with the ‘make it look like you know what you’re doing’ aspect of it. For any actor it’s always exciting to have busyness–to do something with your hands and distract your mind, which I loved. So much of what happened on the set was [the food prep]. “

Killjoys will return for its final season this summer on Syfy and Space. Macfarlane is grateful for the show’s run, and happy with where the show lands. “I think it achieved what it wanted to do, especially at the end,” he says.

“And that’s to give everybody a sense that these people are going to go on and doing what they do best. and that’s why we love them. They’re always going to be ass-kickers  No one’s going to change their lives in major ways. They’ll keep fighting. I think the audience can be satisfied.”