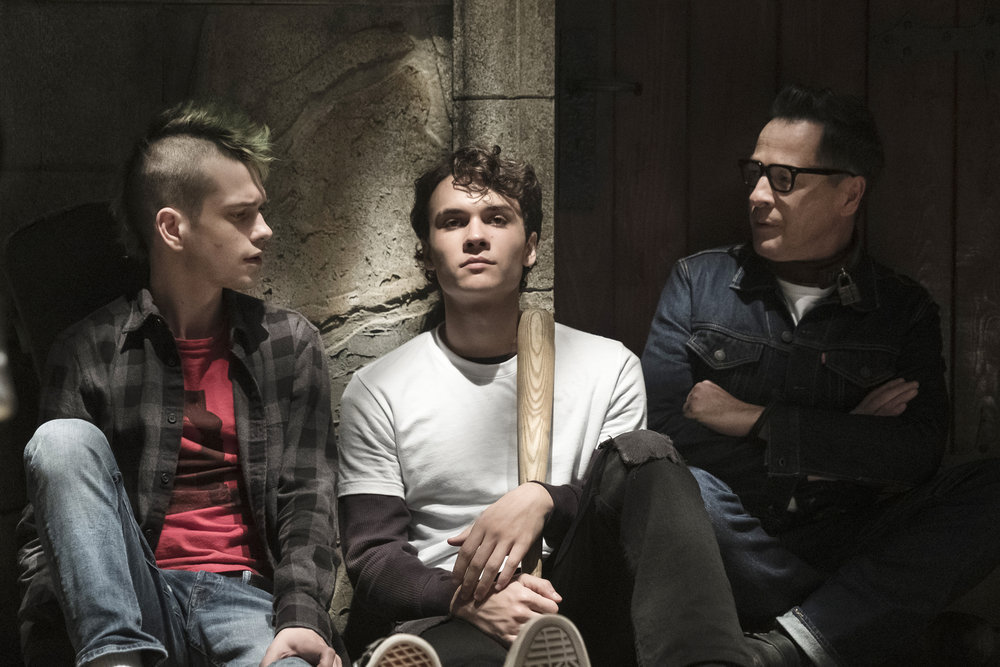 There’s a point in a freshman show where everything feels like a rush towards the final confrontation. It’s like cresting the first hill of a rollercoaster. Your stomach feels queasy and you suddenly realize that there’s a good chance this could all go horribly wrong.

This week was definitely the tipping point for Deadly Class. What’s unusual is that it ran on three different and separate storylines, all of which share some vital elements: poor decisions, family, and high stakes consequences.

Following on her backstory reveal on “Stigmata Martyr“, Maria continues to unravel, letting loose on an unfortunate Lex during combat exercises.

She is unable to put off the Cartel’s need for vengeance for Chico any longer when Chico’s father, Diablo (David Zayas, Blue Bloods) arrives at the school.

Told in no uncertain terms that results are needed immediately, Maria puts her training to use and using Yakuza jerk-face, Yukio, as a scapegoat, she kills him in the restroom at a nightclub. In her rush to escape before the rest of the Yakuza spot her, she finds it necessary to kill an elderly kitchen worker as well.

Knowing that her life is on the line, she accepts Diablo’s accolades and drives off, secure in her status as Chico’s avenger.

Master Lin’s plot-line involves a lot more exposition on his family. Master Gao reveals that, not only was she taken from their home to be trained by the guild at age eight, she also had a child, a son, who died.

They discuss how the deaths of their children shaped them and Gao accuses Lin of becoming soft. Gao, who we know hid his wife and daughter rather than sacrifice them to the Guild as his sister was sacrificed, states that everyone mourns differently.

Gao puts her observations together with the fact Lin keeps his pipa in tune despite not playing it and tracks him and his daughter, Nahia (Viva Lee), down after Nahia’s pipa lesson.

Gao makes it very clear that her brother has miscalculated badly and he should expect to lose everything. In another family reveal, she reminds him that their great-grandfather swore an oath that binds all of their family to The Guild.

And that brings us to the major storyline in this episode and what’s turning out to be the major conflict of the season. Chester “F—Face” Wilson.

(Oh, there’s a sweet little aside where Willie and Gabrielle spend some time together at her place. I’m sure it’ll prove to be important later but with so much going on elsewhere in this episode, it kind of gets lost in the jumble.)

In the weirdly unmonitored garden of King’s Dominion, Marcus finally reveals to Saya what happened at the boys’ home.

His escape plan — which included poisoning his roommate, setting off a NASTY shrapnel bomb to incapacitate the guards, freeing all his fellow boys, and shooting the home’s administrator (which he can’t bring himself to do) — went wrong when Chester managed to survive the poison AND the bomb, stole a guard’s weapon, killed the boys, and set the home on fire.

Nice that the school keeps one of those on staff, isn’t it? Marcus and Saya spring the Scorpio Slasher in order to fulfill his price of a carnitas burrito, picking up Billy in a puzzle room on the way out.

Poor Billy. One second, the worst thing he has to worry about is opening a door to ravenous lions. The next, he’s holding a leash on his cannibalistic Psychopathy professor.

After a bit of a wander — and it gives me pause that three teens with a middle-aged man on a leather leash doesn’t garner more attention in 1980s San Fran — and an ice cream stop, Prof. Slasher leads the merry gang to San Francisco’s only animal shelter that accepts anonymous abandonments.

And sure enough, that turns out to be F—Face’s hunting ground.

Nothing’s right with ol’ Chester. He’s still holding the stoner mentor, Shandy, captive and has gathered his blood relatives together to squat at Shabnam’s house (no sight of Shabnam’s parents this time and that doesn’t bode well) while he orchestrates a series of killings to gain notoriety.

The only person he can really talk to, it seems, is Chico’s head. And, interestingly enough, the head is talking back in a rather friendly and un-Chico-like manner.

After their encounter, Chester’s down one eviscerated cousin but he manages to get away with Shandy strapped to the front of his vehicle dressed in a full-body bunny suit with the nipples cut out. Yeah, I’m not going to be able to un-see THAT for months.

So, to sum up, with three episodes left:

We may not be in total free fall but it’s getting close.

Game of Thrones “The Long Night”

It’s All About Timing in Krypton’s “The Rankless Initiative”