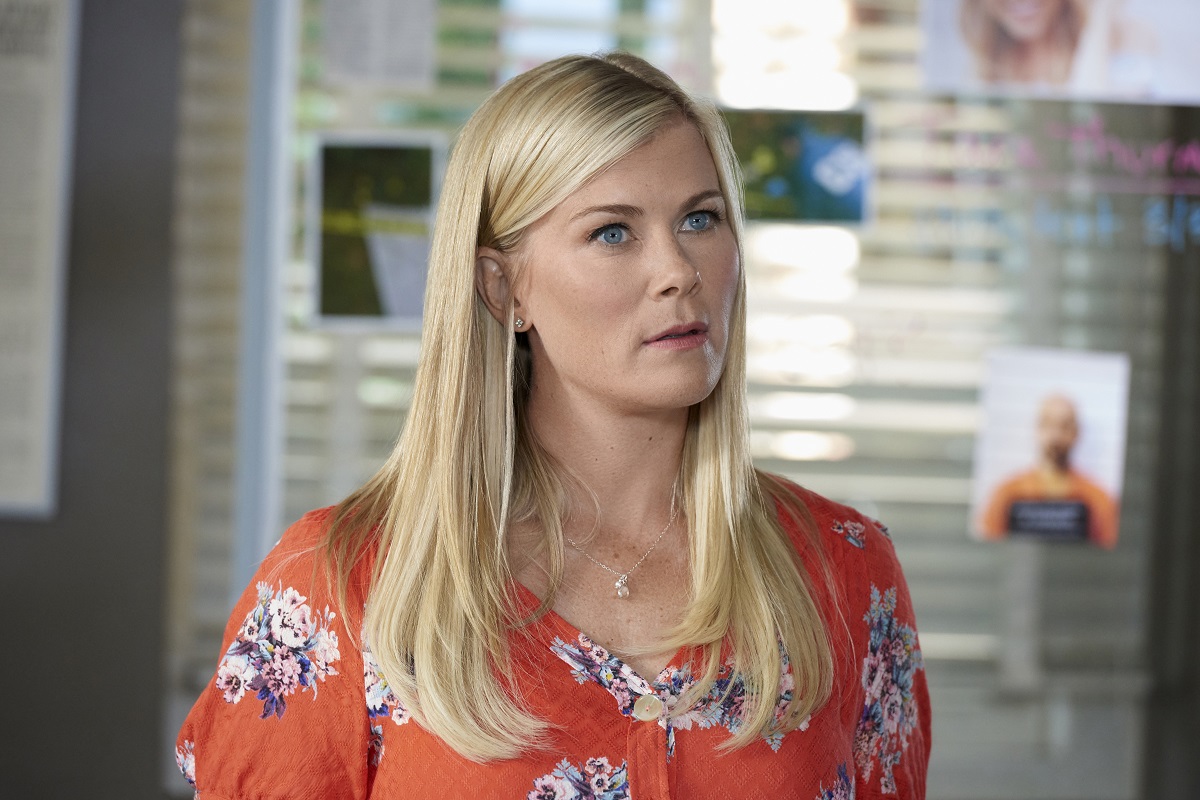 Hallmark Movies & Mysteries’ newest franchise, Chronicle Mysteries, continues Sunday night with The Wrong Man. Similar to last week’s Recovered, the second film is a fun who’s who with Hallmark players Peter Benson (Aurora Teagarden) and Jesse Moss (Murder She Baked) guesting alongside Marco Soriano, who played Gino in the last Murder She Baked. In the second part of my interview with Alison Sweeney, she talks about her love for the mystery genre and including her previous co-stars in her newest venture.

“I have found in making all these movies people I enjoy working with. Actors who are so talented who I enjoyed being with on set and who enjoy the genre,” she shares. “You want to celebrate people who are good and do their job. It’s one of the things I love about being a producer—bringing people back who I love to work with.”

The series marks Sweeney’s first time working with Benjamin Ayres, and she credits Hallmark with making that match. She also did her due diligence. “I had never worked with him. Hallmark played a big part in bringing him on and I was so lucky and grateful. He’s been fantastic,” she says.

“I will confess I called an actress he’d worked with and asked her what he was like and she gave him the thumbs up, We were hoping to make a ton of these so you want to make sure you like the person you’re working with.”

As we covered in last week’s interview, Sweeney helped develop the series, wearing executive producer and lead actress hats on the project. She loves all aspects of bringing it together. “I don’t know if I could pick one thing I love more. I love developing the story when Melissa [Salmons] and I are bantering back and forth with idea and clues. If someone was overhearing our conversation, somebody might be pretty nervous about us because we can be pretty bloodthirsty on our calls,” she laughs.

“That part is so fun. The creation of the story from inception. Who are these people, and what motivates them to behave in ways that seems to be suspicious but turns out to not be? You have to give every person real motivation to play their point of view. It feels like a five-thousand-piece jigsaw puzzle. And it’s so satisfying when you get it into shape.”

“And then there’s nothing like being an actor and being onset and talking through scenes with people you like and working with directors who are excited about your vision. All of that is very rewarding to me. That’s what make this genre so much fun to be a part of. It can be day-to-day [life] and bursts of excitement that are challenging and fun to shoot.”

“It’s like choreographing a dance and it’s physically demanding. There’s a trust of not wanting to hurt the other person in real life but making it look like you’re in the middle of an altercation. Doing stunt work with wires, it all feels fun and exciting and that the danger is going to play and up the stakes for the audience. They’re with Alex and Drew picking up clues trying to figure it out. They’re along for the ride and it’s going to be a bumpy ride.”

The Wong Man follows Alex as she settles into her new job and kicks off her next podcast at the request of a man (Benson) who was acquitted in the death of his wife but still bears the stigma of being a suspect. While Alex dives into that, Drew’s latest assignment takes a surprising turn toward his past. Terry Ingram directs a script from Salmons.

Chronicle Mysteries: The Wrong Man airs Sunday at 9 pm/8c on Hallmark Movies & Mysteries. Here’s a sneak peek. You can also follow the series on Instagram.