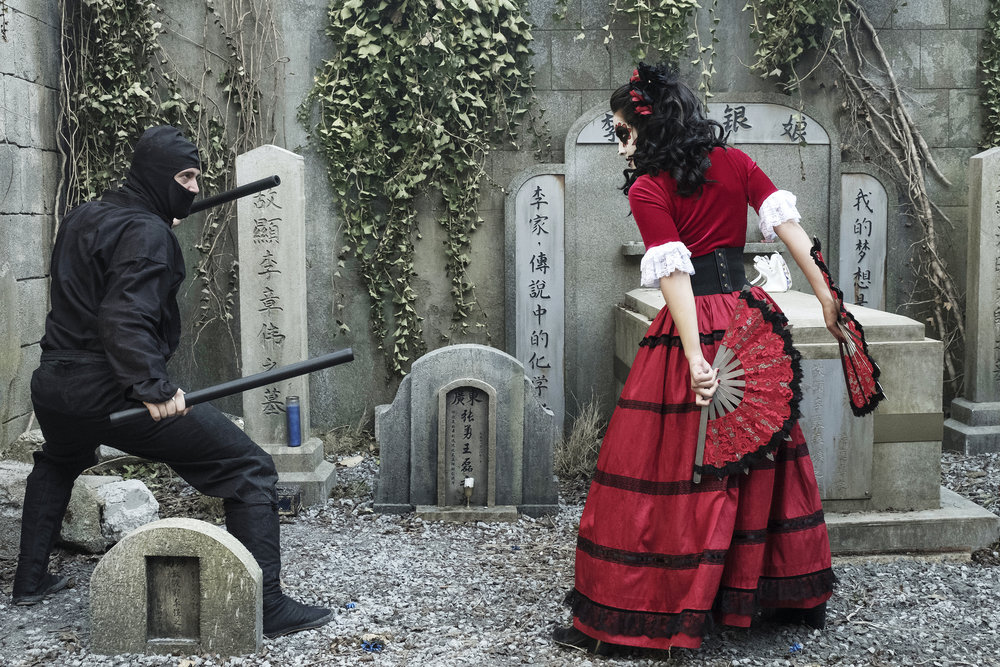 Okay, I’ve been a bit slow (and I’m thoroughly embarrassed now) but I’ll admit that I only JUST realized that every episode of Deadly Class has had a song title as its title. My bad.

This was a hard follow-up to the psychedelic Vegas road show that was “Saudade” where Chester not only caught up to Marcus but Maria killed Chico to save Marcus (and herself, if she’s totally honest).

In the aftermath, a month later, we see interrogation by the Guild leader, Master Gao (Olivia Cheng, Arrow) of the students most connected to Chico.

With no body, there’s no proof anyone killed Chico but his absence creates a bully void at King’s Dominion and Viktor is happy to jump in there as tough guy, picking on Shabnam who apparently doesn’t keep in contact much with his parental units.

All the Vegas returnees are super stressed though. Maria’s off her bipolar meds, claiming that dating Marcus made her better. Saya has an eye on the Cartel clique since they are on the hunt for Chico’s killer despite Maria being put in charge.

Willy’s got a sense of impending doom that the truth about his inability to fight is going to come to light. He’s so preoccupied that, if Marcus hadn’t pointed it out, he would’ve missed the chance to get to know Gabrielle (Kelcey Mawema, The Exorcist) a girl who comes into the comic store he and Marcus are working in part-time.

Honestly, it was kind of a relief to see one of the King’s Dominion students interacting with a normal person. Their lives are so surreal, it needs a dose of normality every once in a while.

Within the curriculum, Master Gao is a disruption. She judges the students harshly, expecting them to toe the expected assassin’s line of being inconspicuous and invisible.

Her expectations don’t stop there either. When Master Zane penalizes Brandy for taking out her teammates as well as a team of ninjas, she insists that he fail Saya instead for not anticipating the betrayal.

My theory about Gao’s championing of Brandy is that she knows that Brandy surpassed (ie. outlived) her brothers and she identifies with her since she outranks her own brother, Master Lin.

The conflict with Master Zane becomes an ongoing issue, coming to a head when Gao holds Zane down as Brandy carves the “A” grade she believes she deserves into his forehead.

Brandy’s still far from likable but it’s interesting to get some insight into her background. She’s not stupid although she’s made an art out of her ignorance. We know she and Willie hooked up too so there’s an indication that her hilly-billy creds are a little bit for show.

Maria’s the deep-dive in this episode. We not only see her unraveling from the stress of killing Chico, the fear of Chico’s family finding out, the effects of discontinuing her medication, and her self-mutilation, we get the animation of her childhood and how she ended up in the custody of Chico’s family.

Petra’s story still remains the most horrifying of the backstories for me but at least it is in her past, as awful as it was. Maria’s trauma is what she lived with every day from her childhood and continues right up to the present moment.

You know, despite being the story of emotionally-damaged, highly-impulsive teenagers, I haven’t had a hard time understanding the characters’ motivations up until this episode.

While Marcus and Saya are at a stalemate as far as romance goes, he and Maria are a total trainwreck. Since he’s her ultimate rebound and she is in the most unstable state of mind EVER, he’s understandably hesitant initially to take their intimacy to the next level.

So how does her trying to kill him make it okay — almost a compulsion — to have sex with her? Not only that, they’ve made a huge deal about keeping the relationship secret (and sucking at it, btw) but having sex in the outdoor courtyard on TOP of a Guild tomb? How does this not get them killed or at least draw some unwanted attention?

There’s a handful of other useful reveals here. Chester’s obsession with gaining fame and notoriety doesn’t include mean his executive functioning is hitting on all cylinders. Again, with the dark humor, I’ll admit to laughing at his frustration over the missing video cassette in the wake of all the carnage he caused in the alleyway.

His phoned-in ultimatum to Marcus lets us in on the fact he kept Chico’s head and that he has Shabnum’s parents dressed up as furries and caged in their own kitchen.

The big shock has to be that Master Lin has a family. That’s a vulnerability we know won’t be overlooked if it ever comes to light. Sister Gao has a BIG chip on her shoulder.

So we have dangers on all sides – Chico’s cartel family, Saya’s brother’s crew, and Chester obviously – as well as Gao and the Guild INSIDE King’s Dominion.

There’s really no down-time in this place, is there?

Make or Break: The Linda Perry Project “The Journey Begins”