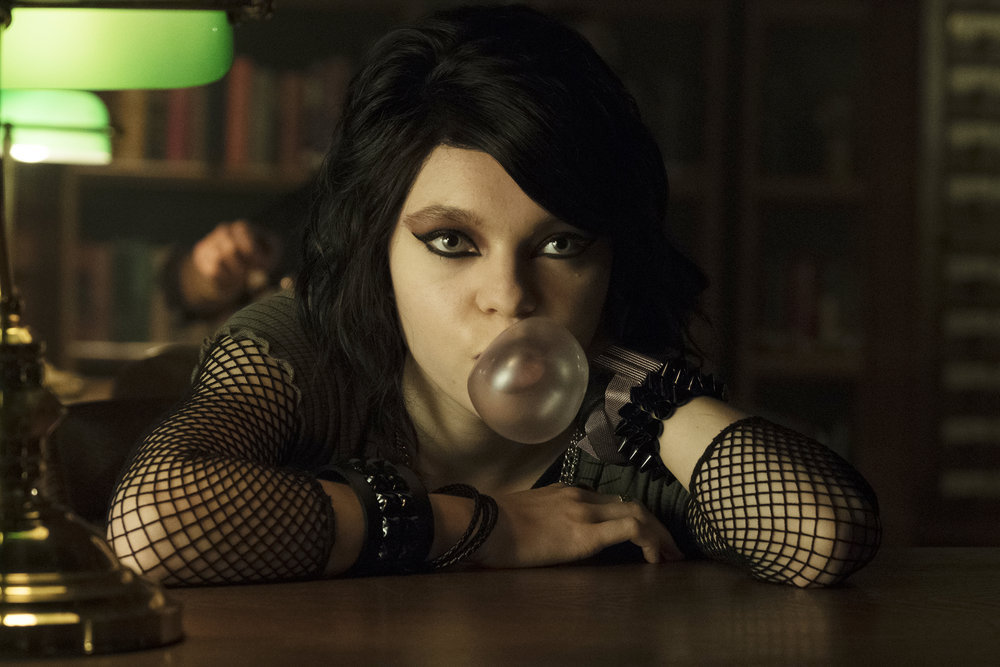 In the aftermath of the events of “Snake Pit”, Chico, Marcus, Saya, Jayden, Viktor, and Petra are punished with a forty-eight hour (!) detention in the school library.

There’s no way that it was an accident that the detention set-up strongly evoked the iconic scene from the film The Breakfast Club.

Of course, Jayden is the extra so his demise probably shouldn’t have come as a surprise. Could’ve just thrown him in a red shirt to make it more predictable.

While the six students are in detention, a lot is going on in the dorm.

Billy gets a call from his little brother and he goes home for an ill-advised visit where his mother tries to feed him mayonnaise-based KD and he confronts his father about his new problem behaviors.

Maria takes opportunity Chico’s absence affords to find a way to escape him. She asks Willy to get her a passport. Unfortunately, Chico returns early (more on that later) and she quickly hides it. More unfortunately, he probably saw it in the mirror.

Central to the Breakfast Club plotline is the follow-through to Yukio’s mystery package. After Billy gets the call from home on the shared dorm phone (pre-cellular phone world looks so strange at times), Yukio makes a call informing someone that the detention servers will be unprotected during their incarceration.

And this brings a couple of totally inconspicuous masked Yakuza into the King’s Dominion front, the Smile Diner. Despite the fact everyone in the place is armed and trained, they slaughter them all in order to get to Saya.

Not knowing she’s being hunted, Saya’s busy sulking over having her sword taken. Even breaking into the King’s Dominion treasure trove of confiscated contraband doesn’t cheer her up due to the fact her sword hasn’t made it there.

It takes a motorbike and an Evil Knievel stunt to get her in a better mood but then Jayden gets on the bike and gets his hand sliced off by masked baddies.

The fight is laughably unbalanced and it’s kinda shocking more of the students didn’t die considering their wounds and their opponents.

Easily the most disturbing scene so far in the series was Petra’s animated backstory involving her father founding a cult, the cult’s activities in her home, and her mother’s horrific and scarring demise.

If anything’s going to give me nightmares this season, it’s going to be that sequence. And that’s including all the F-Face stuff I assume is coming down the pipe. More on that later

The final showdown with the Kamiga Brothers was redemptive in that Marcus got to step up and Saya didn’t end up being the passed out princess needing rescuing.

Also, it was cool to see Master Lin using his skills outside of a classroom. He’s obviously still smarting from Denke’s departure so it was probably beneficial to burn off some of his grief in battle.

More grief to follow as he probably had at least working relationships with the staff and clientele of Smile.

Where does this put the core student body? Saya gets to live and even got her homework done by killing her cousin in self-defense. She’s not exactly celebrating the victory, of course. Family’s family. The fact her brother sent her cousins for her means her family is maybe a smidge more dysfunctional than most.

Meanwhile, Marcus returns to the dorms to find a badly-beaten Billy removing his cast and determined to do with back-up what he wasn’t able to do in front of his mother and brother. Kill his father. Looks like Marcus is along for this ride.

In the C (maybe D?) plot-line, Dwight Shandy is still squatting at Shabnam’s trashed house. Which is simultaneously a sad and yet totally logical state of affairs.

After reenacting the Risky Business dance scenes in Shabnam’s mother housecoat and then discussing movie star hotness with his own mother, he answers the door to find a face even a mother couldn’t love — Marcus’ ex-roommate, Chester F—face Wilson.

By the time Shabnam’s “parental units” return to the remnants of their home — and his father’s optimistic “At least he’s made a friend or two,” comment was pretty much the only funny line of the episode — Dwight has obviously been bested by Wilson.

Not a lot of levity in this narrative despite its comedic 80s roots. I’m hoping the next outing has a better balance of dark humor with the … just DARK stuff.

Dancing with the Stars “Season 24 Week 6”