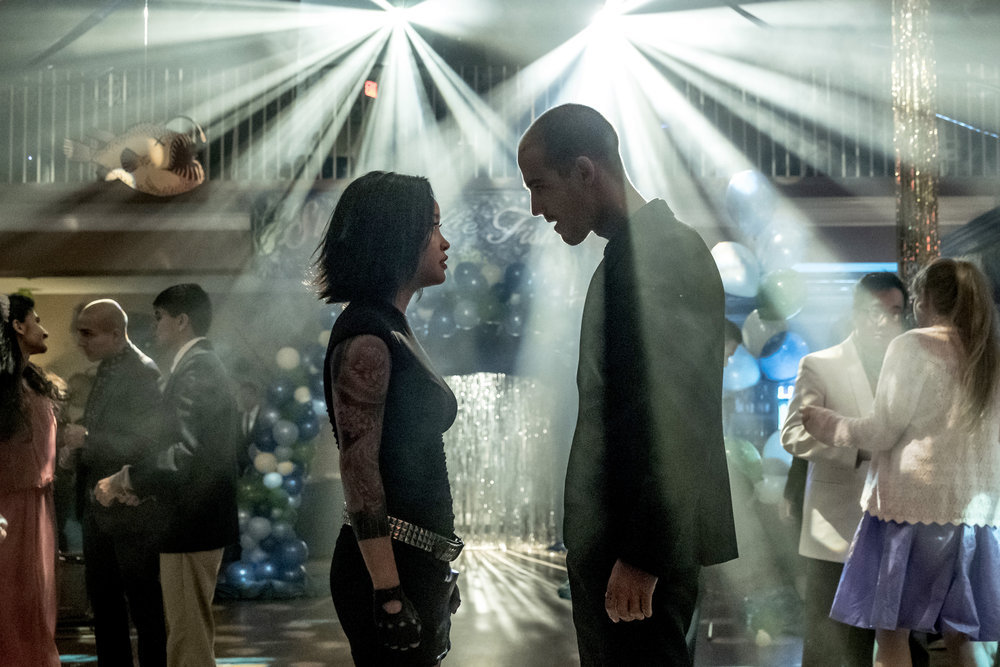 The 1980s was the hey day of the high school dance drama and Deadly Class really uses the well-known setting to its max potential with King’s Dominion’s annual “Sleeping With the Fishes” Legacy-only dance.

It comes in shades of Sixteen Candles, Pretty in Pink, Heathers, and even Carrie. The cliques come into play, especially as the Rats experience the “tradition” of Hazing Week.

There’s a moment of redemption in the name of loyalty.

And it all ends with the right couple slow-dancing out to Chris deBurgh’s “Lady in Red”.

This episode’s animation plays out immediately after the recap, giving us a glimpse into the history between Marcus and his violent, bestial boys’ home roommate.

The character, Chester Wilson aka F-Face in the graphic novel, so far unnamed in the show but played by Tom Stevens (Wayward Pines) gave Marcus his most noticeable scar and we know he’s looking for him, possibly because Marcus messed up HIS face in return with either the fire that burned down the home or the dirty bomb we see in the animation, or both.

Meanwhile, Marcus is having an effect on the faculty of King’s Dominion. His talk with Poisons professor, Denke, reignites the flame of social justice in the would-be anarchist and he tenders his resignation to Lim, knowing full well that it’s not as easy as that. He leaves Marcus with a few words of wisdom:

It’s gonna get worse, not better. Keep your head down. Pick your battles. Save your time for maximum destruction. Play ball at King’s until you learn what you need and then get the f— out. Before finals.

With Denke on his way out (and, seriously, he’s my new favorite TV teacher so I’m super bummed about that) we get introduced to a couple of new ones as well as another look at DeLuca in Hand-to-Hand Combat class which focuses this week on blow darts. Foreshadowing much?

Viktor uses the opportunity to get close to Petra again. After their encounter at Shabnam’s house party, he’s looking to get her to attend the Legacy dance with him. She turns him down but when Brandy Lynn gets in her face about it, she decides to attend out of spite.

It seems that King’s Dominion’s curriculum runs on a bit of a seminar system. In Fundamentals of Psychopathy, the class is taught by an actual psychopath. Known as the Scorpio Slasher (French Stewart, Mom) his
résumé boasts forty-one kills and no bodies with a rumor of cannibalism.

He and Marcus do NOT hit it off to say the least.

On the other end of the spectrum, we get Master Zane (Christopher Heyderdahl, Pure) teaching Atypical Combat Skills. Despite Marcus giving away the group entrance, he ends up incapacitating Zane with a phone cord and earning the gold star much to Maria and Saya’s disgust.

Maria convinces Chico to let her attend the dance with Saya as a girls’ night out. Most girls’ nights out don’t include knocking over a liquor store for strawberry wine but whatever.

And that brings us to the dance. So many truths revealed in such a short time. Chico, of course, shows up to try to ruin Maria’s time, telling Saya that Maria’s been working her. Whether or not Saya buys it is up in the air.

Shabnam seems to find some comfort on the dance floor with a much taller partner while other background but familiar characters seem to enjoy cutting loose.

And Petra has a good time until it turns out the whole thing was a set up by Brandy Lynn and her gang with Viktor facilitating. Humiliated, Petra joins the Rats up on the roof where Marcus decides it’s time to stop sidelining it.

There’s no point in having friends if you’re not going to stick up for them.

Putting together the blow dart skills and the Mellow Yellow elixir from Poisons Lab, the Rats infiltrate the dance, taking out Viktor, Brandy, and a few choice others.

Chico grabs a hold of Marcus but Willy steps up and publicly defends his until-recently-secret buddy. Master Lin and the monks arrive before Willy’s pacifism starts showing and declare the dance over.

Like many 80s teen films, it’s all about the relationships and “Snake Pit” wraps these up quickly. Saya and Maria remain friends (yay!). Willy and Marcus patch things up (woot!). Billy and Petra get to slow dance (double yay! and a wa-hoo!).

Master Lin and Denke don’t get as happy an ending. The school’s trustees give Lin the task of terminating the Poisons prof. They have it out over a glass of wine laced with potassium chloride. Lin pulls his finishing move and Denke gets away. Which means he COULD come back. Got my fingers crossed on that.

We get another teaser/stinger scene right before they cut to credits. Yukio (Sam Jin Coates), a background Kuroki Syndicate jerk-face, returns to his room to find a box containing a large amount of $100 bills and a picture of Saya.

Once Upon a Time “Darkness on the Edge of Town”