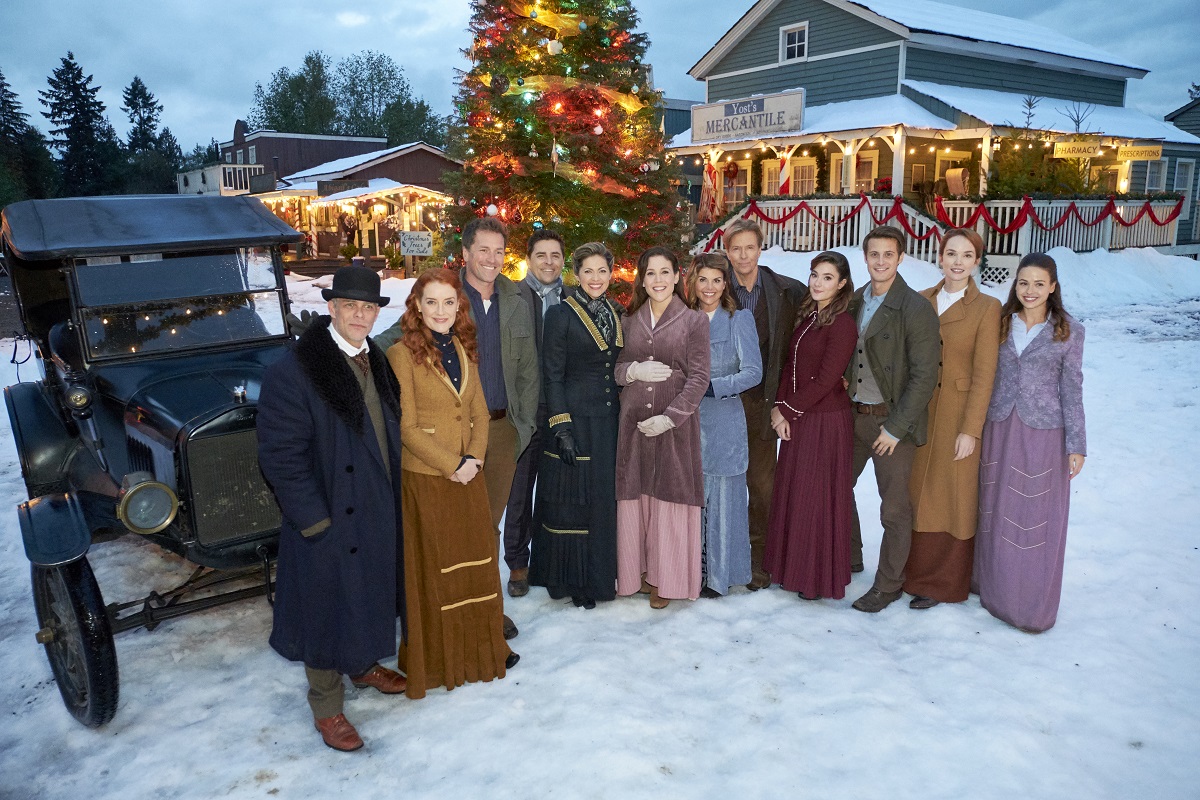 Christmas is next Tuesday, and there are still a handful of premieres rolling out for the long holiday weekend, beginning Thursday night on Hallmark Movies and Mysteries and including the annual When Calls the Heart Christmas film Christmas night. Check out the full lineup of seven new films coming to Hallmark Channel, Hallmark Movies & Mysteries, and UP Television.

Relationship author Joanna Moret (Chelsea Kane) fears a breakup will ruin her professional image and an offer for her own TV show. She asks Ted (Drew Seeley) to pose as her boyfriend for the holidays while she plans her future boss’s Christmas gala, and in exchange she’ll help him try to win back his ex-girlfriend. They soon realize there’s more to their agreement and Joanna must decide if she should break her own playbook to pursue a new relationship.

Struggling artist Kelly Riley (Danica McKellar) returns to her Wyoming hometown for the Christmas holiday and becomes involved in an effort to save the town’s beloved lodge from the wrecking ball. In the process, she finds herself falling for Leo (Brennan Elliott), the widower sent to Grand Valley by his company to decide the fate of the lodge.

This is another long-overdue pairing to have Elliott and McKellar finally co-star together. That’s treat number one. The second is having McKellar’s The Wonder Years co-star, Dan Lauria, along for the festivities as Kelly’s Dad, Frank.

Elle (Brooke Nevin) is an ambitious Chicago executive looking forward to her annual Christmas party with close friends. When another executive, Max (Michael Cassidy) is brought in from New York, she’s concerned he might affect her pending promotion.

She becomes attracted to him, and it gets complicated when he decides to stay and apply for the same job. As the day of interviews approaches, they decide to let the better person win, but Max has other plans. Additional cast include Hallmark regulars Lynn Johnson, Andrea Brooks, and Jeremy Guilbaut, as well as Catherine Lough Haggquist. Our exclusive interview with Lough Haggquist is here.

Freelance photographer Sam (Emilie Ullerup) grew up spending summers at her family’s vacation home on Cape Cod, where she and Mike (Josh Kelly), a local boy, became inseparable friends. The untimely death of Sam’s mother brought those summers to an end for Sam, who couldn’t bear the thought of returning.

They meet again 13 years later when she returns to Cape Cod for her father’s Christmas Eve wedding. Their feelings for one another are still strong but their stars may not align: Sam is close to landing a staff position at a Boston newspaper and Mike is on track for a new job in London.

Gretchen (Alexa PenaVega) wants “Holidays Made to Order” to be her full-time business, but can’t take the risk. Decorating a lobby, she bumps into architect Steven (Jonathan Bennett), who hires her as his Christmas connoisseur for his family’s party. Eventually Steven joins the merriment and, along with his family, becomes smitten with Gretchen.

Proving he supports her business, Steven asks his firm to hire Gretchen, but she declines, feeling the job will stifle her. He then offers to double her original pay, making Gretchen feel like just his employee. Now Steven must prove their relationship started as business, but became a made-to-order love story.

High-powered music executive Ryan (Bradley Hamilton) is so desperate to sign the latest internet sensation to his label that he agrees to accompany his sister to a country wedding just to get the chance to meet him, but he instead meets and falls for Krista (Sarah Troyer).

Through a year of mistaken identities, misunderstandings, and masquerades, the two will need to hope that a lot of love and some Christmas magic can bring them together. Also look for Kevin McGarry, who’s coming up next month in two Hallmark Channel premieres and the next season of When Calls the Heart.

As Christmas approaches in Hope Valley, newly widowed Elizabeth prepares for the birth of her baby and Abigail prepares for the town’s Christmas gathering. The town welcomes orphans and their caretakers, who have been stranded on their journey to a new orphanage. When Bill makes a troubling discovery about these newcomers he is forced to make a decision that will affect them all.

Meanwhile, Elizabeth, Abigail and Rosemary get stuck in a storm and face a tremendous Christmas Eve emergency. Hope Valley must rely on the courage of some of its strongest women, and the Christmas spirit, to guide them to a safe and happy holiday. One scheduling note–this one will not repeat after its premiere, so set those DVRs if you can’t watch it live!

For those keeping track, that’s a wrap on the Christmas movie premieres for 2018. Thanks for hanging out with us! Hallmark Channel has one New Year’s-themed film coming on Saturday before rolling right into its annual Winter Fest. Check back for those previews!

Photos for Hallmark Channel and Hallmark Mysteries and Movies films courtesy of Crown Media. Photo for UP film courtesy of UP Television.