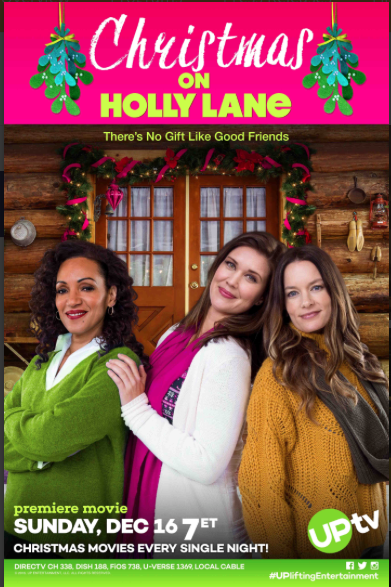 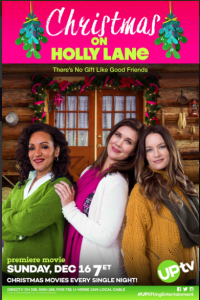 Christmas on Holly Lane is one of the rare holiday TV movies that feature a true ensemble. There isn’t a single meet-cute couple at the center of all the action. Three friends are at the heart of this story.

Sarah, Cat and Riley have each other’s backs. They all have valid reasons to be unhappy with their current situations. When they reunite at the home that meant so much to them growing up, they end up relying on this lifelong connection. They haven’t needed each other this much since they were teens.

UPtv has been known to surprise me before with the quality of their feel-good Xmas flicks. Last year’s Christmas Solo starring Jonathan Scarfe and Kelli Williams completely took me by surprise. If I had created a top 10 list of Favorite Holiday Movies of 2017, it would have been near the top.

For the record, Bethany Joy Lenz and Andrew Walker’s Lifetime film Snowed Inn Christmas would have been number one.But I digress.

What’s great about Christmas on Holly Lane (not to be confused with Hallmark Movie & Mysteries’ Christmas on Honeysuckle Lane) is that it’s all about friends supporting each other as they create a life that works for them. If you’re unhappy with your present circumstances, it’s time to change them. But you don’t have to do it alone. Good things happen when you let people into your life and let the power of friendship, hope and heart lead the way.

The house on Holly Lane has always held a special place in the hearts of life-long best friends Sarah, Cat and Riley. It’s the magical home where they spent many happy Christmases. Now, the girls are all grown-up and the house they hold dear is in danger of being sold. With each friend at a different crossroad, they will all have to come together to call upon that special Christmas magic that can only happen on Holly Lane.

The three women leading this ensemble are all familiar faces.

I was first introduced to Lancaster thanks to a Saturday morning spin-off called Saved by the Bell: The New Class. Some of her many other TV credits include: Everwood, Undressed and What About Brian. But her most significant claim to fame is playing Chuck’s sister, Ellie Bartowski on the NBC spy comedy, Chuck. Plus she has some previous Christmas movie street cred, namely, Christmas in the Smokies and ‘Tis the Season for Love.

It’s so awesome to see Holness as one of the leads because I’ve seen her in supporting mode in so many different projects. She’s done a ton of Hallmark originals including a Wedding Planner Mystery, a Fixer Upper Mystery and a Garage Sale Mystery. Even a Signed, Sealed, Delivered movie. She’s no stranger to UPtv having done The Tree that Saved Christmas as well as the short-lived series Date My Dad. She’s also guest starred in everything from Fringe to Smallville to Arrow to Lucifer and my personal favorite, she did an episode of Mutant X back in 2002.

The fierceness continues with Holden who will forever be one of my favorites because she starred in one of the earliest episodes of the CW’s Supernatural. She played Haley in season one’s “Wendigo.” Loved the chemistry between Haley and Jensen Ackles’ Dean Winchester. She was in Lifetime’s vampire drama Blood Ties. Starred in the short-lied Flash Gordon series that aired on Sci-Fi (now Syfy). She played the daughter of Christopher Reeve’s Virgil Swann on Smallville. Her many other TV credits include Suits, Life Unexpected, Harper’s Island and Da Vinci’s City Hall.

Callica plays a do-good doctor who reconnects with Riley while she’s visiting Sarah. The actor looked super familiar to me but couldn’t place his face. After a quick look at IMDB, I realized where I know him from. He played Jay’s boyfriend during the third season of Lifetime’s UnREAL. He was also in Wayward Pines and Almost Human. Love that a couple of his credits are for playing “Hot Cop” on Lucifer and “Hot Male Bartender” on Imaginary Mary. Shallow TV Alert: Callica’s definitely adorable.

To recap, in addition to the awesome cast, I love the fact that Christmas on Holly Lane gives us a true ensemble where all the leads get their fair share of chances to shine. These friends listen to each other but they also have a lot to figure out about their own lives.

Plus I enjoy the evergreen themes of friendship and love that’s soaked in every part of this movie. It’s through friendship these women find their way to happiness. Don’t get me wrong. There are some romantic entanglements (and un-entanglements) throughout the movie. But it doesn’t live and die by these love connections. And that’s so very refreshing.

Christmas on Holly Lane debuts on UPtv tonight at 7/6c.