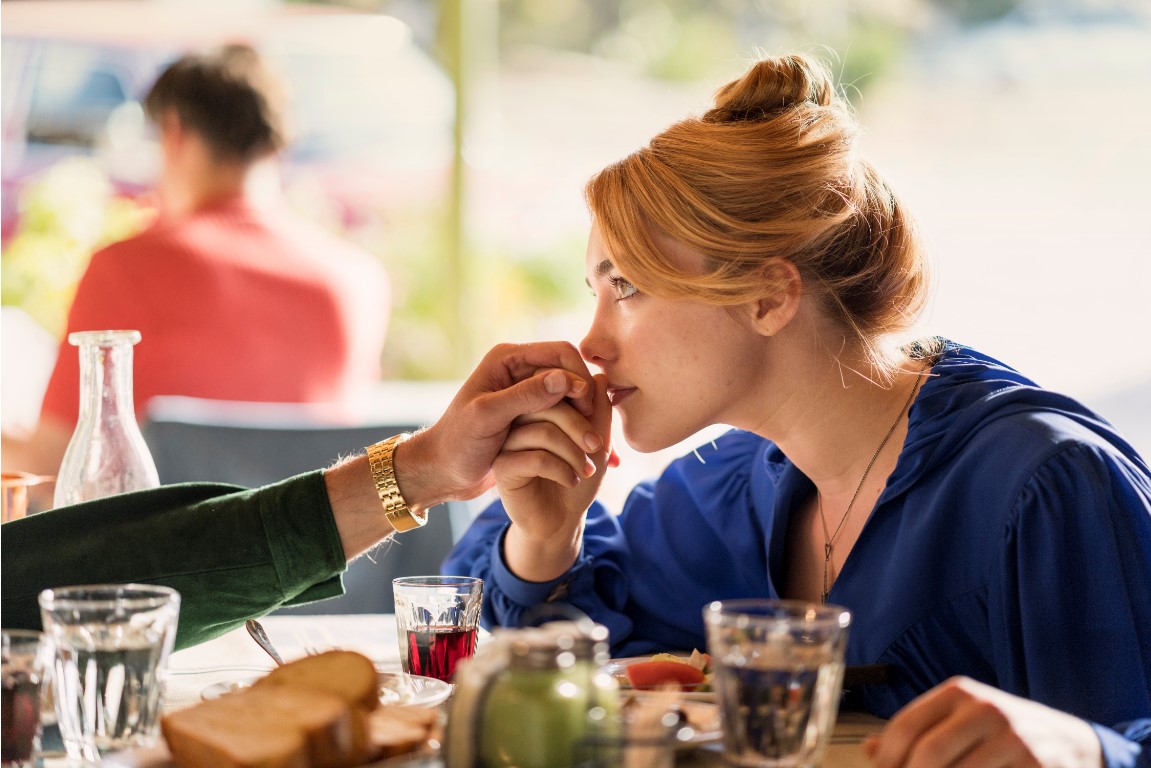 I love having scenes replayed from new perspectives. The cleverness of the twist delights me with the reveal of hidden layers to what initially appeared to be stock material.

So when Charlie’s screen test scene from the premiere plays again but we get to see behind the auditioner’s table and find Kurtz and Rachel giving her direction to “smile more” and be more “loving” it definitely got the long “oooooh” reaction from me.

It’s beyond impressive to see the legwork and research involved in selecting Charlie for the task. And the show’s editors are to be commended for the fabulous job in splicing her psychological deconstruction by the Mossad team with the scenes of Salim’s captivity. It really shows the spectrum of coercion they’re capable of.

Skarsgard’s Gadi Becker continues his low-key lurking but a flashback reveals that he was recruited for the team because of his ability to recruit and indoctrinate agents. He comes to the mission reluctantly, extracting a promise from Kurtz that there will be no killing.

As he works his magic on Charlie, the scenes jump between him and Charlie in Greece and Charlie and Salim in the fictitious past. Using shared clothing and segue lines, it’s reminiscent of the first Mission: Impossible movie when Ethan starts piecing together the truth in his head.

What is clear here is that Charlie lives her truth easily because she makes it up, has made it up for years. Her testing by the Mossad team pushes her to share her own childhood backstory only to have everything she says blown up by their diligent research. Of course, this means she passes the test.

I’m not completely clear when she decides to be a part of the mission. Gadi, as her handler, presents the role as something dangerous, experimental, but, mostly, as something IMPORTANT. It’s the perfect way to reel in someone as curious and adrenaline-fueled as Charlie.

She’s also incredibly self-absorbed. Whether that’s how she got into acting or whether the acting heightened that ability to see everything in relation to herself, who knows? What we DO know is that when she asks, “Who am I?” Gadi knows he’s landed her because she already sees herself at the center of it.

Gadi, as Michel/Salim, spouts the Palestinian rhetoric with whispered zeal, immersing them both in the charade but completely on an intellectual level. When he recites the speech Charlie heard as part of a forum, she realizes how they found her.

When Kurtz first brings Charlie to Gadi as a potential recruit, he comments that the last girl wasn’t clever, that Charlie is someone who is capable of learning from Gadi, possibly surpassing him in his area of expertise. It leads me to wonder if she is capable of betraying the team… or recruiting them to the other side. Shades of Merlin in his crystal cave.

Gadi’s relationship with Kurtz is interesting as well. Right-hand man, Shimon (Michael Moshonov, Kathmandu) states enigmatically in an aside to Gadi, “He’s happy since you came back. It’s not good for him.”

The plot points introduced in this hour are doozies. The Munich team uses a black box cell to gaslight the real Salim into thinking he’s been taken by Israeli forces. They drug an orange to make him think a lot of time has passed and then forge a letter from his sister and claim to have arrested his brother to get him to give up the location of his scheduled drop-off.

Charlie and Gadi spend their time together cutting a very eye-catching profile as a couple of lovers traipsing about the Mediterranean. To gain Charlie access to Khalil’s inner circle the Mossad team hands over Salim’s Mercedes for Charlie to deliver to Salzburg, carrying a dozen bombs-worth of plastic explosive.

To complicate matters, while the plan is being set in motion, on his orders no less, Kurtz is finding out that the intel might be wrong. Well, damn.

The Little Drummer Girl airs on AMC in three two-hour events. Parts 2 and 3 will air on November 26 and December 3 at 9/8c.

Power “Who You With?”