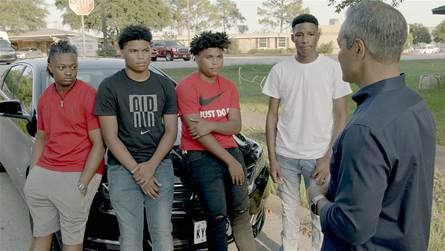 I, for one, am tired of hearing about young, unarmed black men being killed by cops. Iâ€™m not saying all cops are bad, because of course theyâ€™re not. But a disproportionately large group of black men are being shot and killed by law enforcement. So what can we do? How do we change this narrative? Real Sports investigates a â€œTragedy in Texas.â€

Fifteen-year-old Jordan Edwards, known as â€œSmiley,â€ was an honor roll student with dreams of playing major college football. But on April 29, 2017, Edwardsâ€™ dream was cut short when he was tragically shot to death by a Balch Springs, Texas police officer. Initially, police claimed Jordan, his brothers and friends had threatened police with their car just before the shooting, but body camera footage, exclusively obtained by Real Sports, reveals the last moments of Jordanâ€™s life and the truth about his death. Real Sports correspondent David Scott travels to Texas to revisit the circumstances surrounding Jordanâ€™s shocking death.

Head coach Jeff Fleener acknowledges that there isnâ€™t a handbook for this type of tragedy, but encouraged Jordanâ€™s former teammates â€œto think about how important he was to us.â€ But beyond the sadness, his teammates and the community were furious, especially when the police narrative didnâ€™t match up with the young man they all knew.

On top of it all, the community wants to know why Oliver was shooting a semi-automatic rifle in the first place and why he was shooting at a car. After he was fired from the force and indicted for murder, many alarming things came out during the trial. Tune in tonight to find out how the case goes, what becomes of Oliver and how the community deals with the aftermath.

Here are highlights from the other 2 stories youâ€™ll see tonight:

“The Gateway to Chess” In the heart of St. Louis is one of the largest chess clubs in the world, across the street from the memorabilia-filled Chess Hall of Fame. Both initiatives have been spearheaded by uber-wealthy, local philanthropist Rex Sinquefield, who, armed with unimaginable wealth and relentless drive, has a vision to make his favorite game into Americaâ€™s too. The nationâ€™s â€œGateway to the West,â€ best known for baseball and beer, is falling hard for the game, due in large to Sinquefieldâ€™s grassroots movement that includes more than one hundred public schools that have introduced chess into their curricula. Real Sports correspondent Soledad Oâ€™Brien travels to the newly-touted chess capital of the world and meets Rex Sinquefield to learn more about his vision to make the classic game of strategy the modern American favorite.

“Magic Man” Former All-Pro long snapper Jon Dorenbos spent 14 seasons in the NFL, most of those seasons with the Philadelphia Eagles. Despite his success on the field, however, Dorenbosâ€™ love of magic has been the defining force in his life, offering the salvation that helped him through the darkest moments of his childhood. During a seemingly picture-perfect upbringing in the suburbs of Seattle, his father beat his mother to death in a fit of rage. Attempting to cheer up Dorenbos, a friend introduced the reeling adolescent to the art of magic and he was instantly hooked. In 2017, Dorenbos was traded from Philadelphia to New Orleans, whereupon taking his physical he found out he had an aortic aneurysm which required heart surgery and ended his playing career. Host Bryant Gumbel, who first told this extraordinary story in 2014, reconnects with Dorenbos to discuss the life-saving trade and how once again magic is at the center of the healing process.