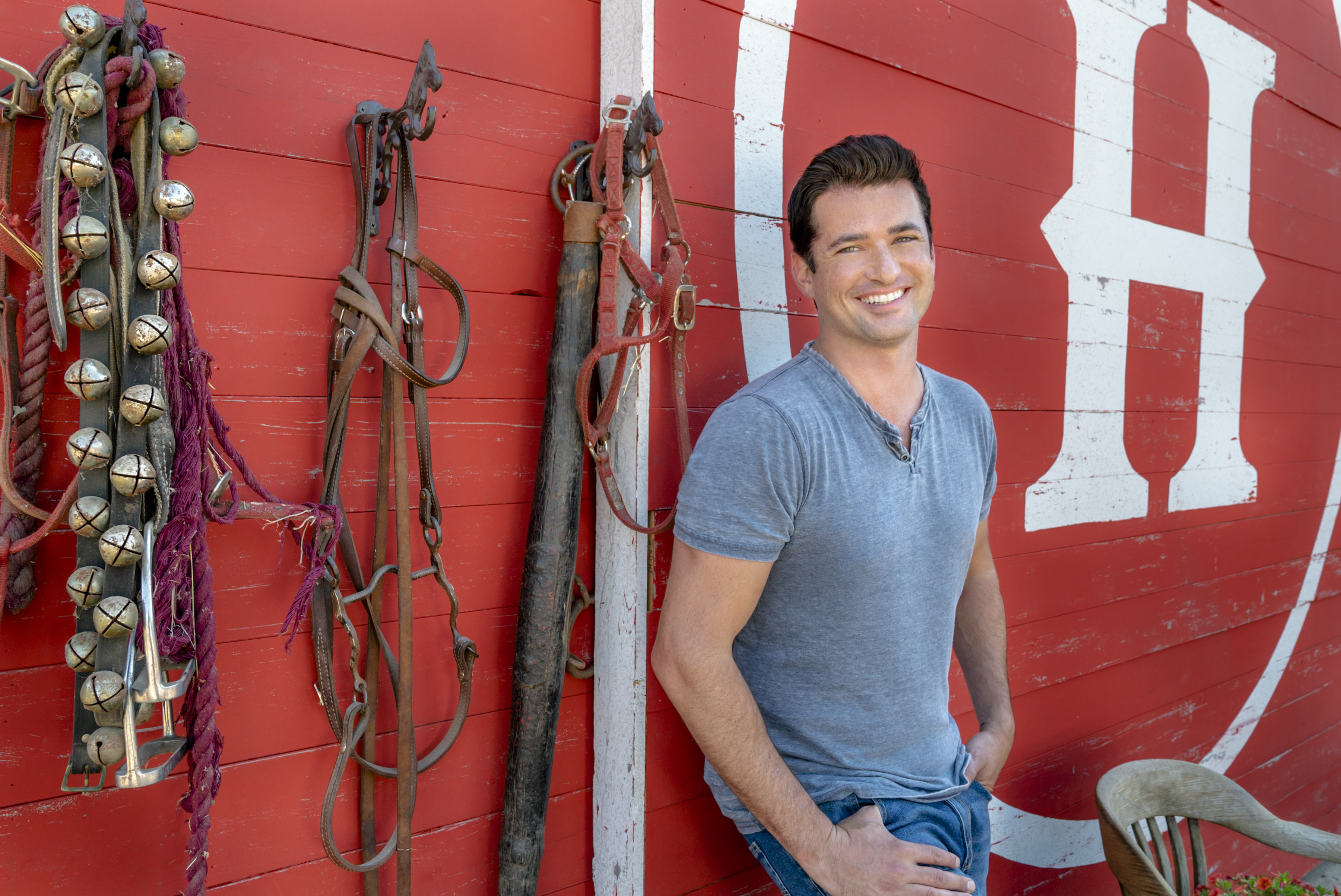 While visiting a dude ranch that is a potential acquisition for the outdoor adventure company she works for, an eager candidate for a big promotion discovers what matters most when she reignites her passion for the great outdoors; and becomes smitten with the ranchÂ’s owner in the process. Photo: Wes Brown Credit: Â©2018 Crown Media United States LLC/Photographer:Â Allen Fraser

Before Hallmark’s annual Christmas-palooza of movies takes over at the end of this month, the channel is focusing on tales of the autumn variety.

It’s a love-it and leaf-it kind of thing with fall-themed films rolling out one after another.

In Under the Autumn Moon, The Librarians‘ Lindy Booth and Deception‘s Wes Brown star as the city girl and the modern-day cowboy ready for their meet-cute moment. And, trust us, that moment is utterly adorable. Let’s just say there’s some lassoing involved.

Booth plays Alex McKenna, a junior exec who works for a leading retailer of outdoor recreation products. Brown’s Josh Ketchum happens to be the owner of the gorgeous Harmony Ranch in North Dakota. He and his sister are reluctantly selling, however.

When Alex sees an opportunity for her company to buy the location and turn it into a retreat for its employees, she jumps out of her comfort zone and immerses herself into all things Harmony. There’s an instant attraction between Alex and Josh even though they’re not always on the same page when it comes to what they want from life.

Much of the action (and the budding romance) takes place outside among the nature and animals. The Canadian city of Winnipeg doubles for North Dakota. The movie was filmed over the summer in one-hundred degree temperatures.

“I love the outdoor elements to all these,” says Brown. “They’re a lot of fun. I hope, though, that we get to maybe one day â€” it probably won’t happen â€” but one day get to shoot one of these fall ones in the fall. Now that would be a pretty cool change of pace.”

Emphasis on cool. But, for him, filming in the heat of the summer is worth it. There are two things he enjoys most about being part of all these Hallmark productions. “The people that I work with. I come away with a lot of new friendships, a lot of new stories. And I’ve never been to Winnipeg. So I get to meet a lot of new people. And spend time in a new city. Then the fact that, hopefully, we get a good movie out of it. That’s just icing on the cake.”

“It’s always nice to be, feel a part of a family and a network like this one,” he continues. “So I have zero complaints.”

He also has zero complaints about working with Booth. “She’s a very big diva” he jokes. “No, she’s very professional, but I told her if I don’t give you hell then that means something’s wrong. So nothing was wrong. I gave her lots of hell. She was a lot of fun. I would work with her again in a heartbeat.”

What he might not want to work again with are goats. There’s a scene in the movie where Josh helps guide Alex in the ways of #RanchLife. This involves getting up close and personal with a whole herd of goats. They were a bit gruff, to put it mildly.

“Goats are kind of jerks, really. They’re very aggressive. They don’t hit their marks, they don’t take direction very well,” laughs Brown. “The goats are fun but there [were] a lot of them. They were bigger than I think Lindy expected them to be. They’re pretty pushy to be honest with you.”

Tending to goats, riding horses, wearing boots and even throwing a lariat rope (“the rope tricks â€” it’s amazing how frustratingly hard they are.”) are all part of the makeup of his character. Brown says he seems to gravitate towards parts that allow him to tap into his inner cowboy.

“I have a lot of friends that are in the business and most people have never gotten to do one western and I believe I’ve gotten to do, I think it’s five right now. So I’m really blessed that it’s kind of a genre that was so big back in the heyday and it’s just not around very much anymore. So the fact that you even get to come close to a western is an absolute blast. There’s really nothing better.”

Hallmark fans will get a double dose of Brown when he pops up as the love interest to American Idol alum turned talk show host Kellie Pickler next month in a holiday flick called Christmas at Graceland. It was shot in July in Memphis (“that was straight low of ninety-five at night.”) and some of it was actually took place at Elvis’ home, which he says was a great experience.

“There’s no really words to describe it. I was just very thankful that we got that opportunity because there’s been no movie that’s been allowed to shoot there.”

And he really enjoyed working with Pickler. “I love being around musicians and people that are as gifted musically as Kellie is,” he reveals. “It was a very unique experience. And you get to hear these vocal chops that it’s not normal.”

Christmas at Graceland premieres November 17. But before then you can catch Brown in Under the Autumn Moon tonight at 9/8c on Hallmark Channel.

Covert Affairs Preview: “Spit on a Stranger” [VIDEO and PHOTOS]