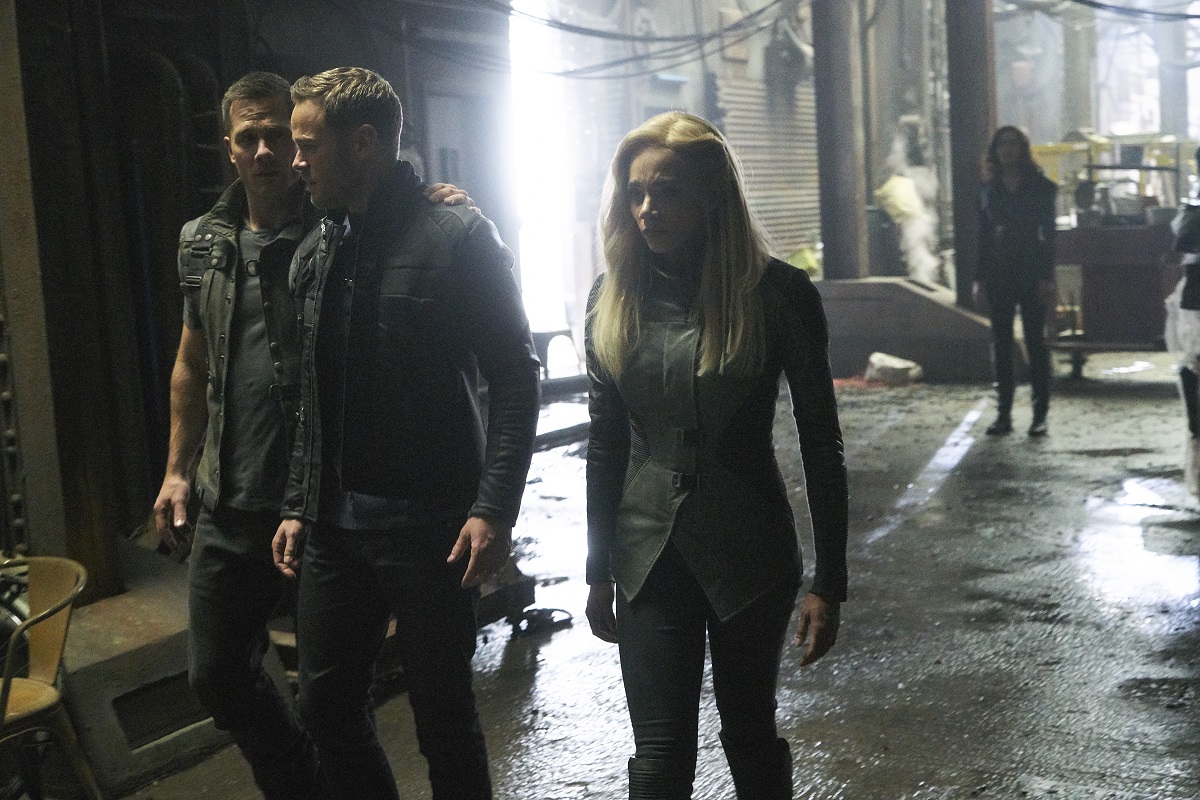 Well, kids. We’ve arrived at the Season 4 finale and it’s a brain bender. Thankfully, we already know they’re coming back next summer for one more season, but it’s going to be a looooong hiatus. Because stuff happens. Banana crazypants OMG stuff. And it’s the absolute best.

Some of that stuff hurts like hell in places. Especially if you’ve been all in on this show from the jump. I’ll give you the flavor, in the most general non-spoilery way possible, but I absolutely recommend you watch this cold. Stay off the Twitter to avoid spoilers if you can’t watch it live. Stefan Pleszczynski directs a script by showrunner Adam Barken.

All those caveats out of the way, here’s what you’re looking at. Team Awesomeforce is down one woman and up another, and the boys have to figure out what to do with that potentially explosive piece of intel. Getting Dutch back is the best impetus for action, ever, so there’s a method to her mad, impulsive decision.

Aneela’s surprising use of logic and science, and the realization of what needs to happen next, put Team Awesomeforce at odds with Turin and Zeph. They soon have their own quandary when it becomes apparent that rescuing the kids came with some unforeseen consequences.

Inside the Green, The Lady, presenting herself in a few startling ways, is doling out a dizzying mix of promises and punishments in a quest to find an ally. This time around, she digs deep into the memory box and pulls out recollections that are not only brutal for the characters, but us, too.

Similar to last week’s massively packed episode, this one has a lot going on, too. YMMV, but I’d say Season 4 leaves us not with a cliffhanger, but the cold open after the cliffhanger, the thing that we’d usually not see until the following season. And boy howdy, do they ever stick the landing.

I’ve been saying all season how the cast and crew just went for it, and the finale is no exception. Hannah John-Kamen does jaw-dropping dual duty, and the boys dig deep, too. Johnny and D’av are tested, and Aaron Ashmore and Luke Macfarlane will make you laugh and clutch your heart in equal measure.

Kelly McCormack and Thom Allison have that lovely scene we’ve been promised, plus there’s more Pree and Gared (Gavin Fox — who also was so great this season) goodness. And Patrick Garrow gets the flip side of his conversation with Dutch in another terrific scene that pairs him with John-Kamen.

The Killjoys Season 4 finale airs Friday at 10 pm/9c on Syfy and Space Channel. Set your DVRs over to make sure you get the glimpse of Season 5. Check back after the finale for my exclusive interview with Adam Barken.

But first, here’s a sneak peek, and definitely join the cast, crew and motley fans for the last live Tweet of the season. In case you missed it, all of our Season 4 coverage is here.