No One Would Tell Preview 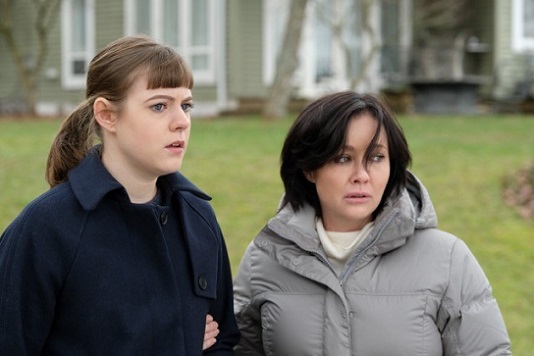 Domestic violence and assault are an epidemic, and in more recent years, there’s also been a light cast on how many mass killings started as a domestic assault that spiraled, catching up extended family, friends, and other innocent bystanders. One of the things that’s often talked about in the aftermath is that people missed the signs, or didn’t miss them, but for a variety of reasons, never spoke up until it was much too late. Sunday night, Lifetime premieres a remake of the 1996 cautionary tale about teenage domestic abuse, No One Would Tell, which was itself based on a true story.

The new film does a very specific job of showing the reticence to intervene and the general lack of awareness, but it squarely places the fault and blame on the abuser, with an added mention that the culture that continues to protect them needs a hard reset. It’s not an easy watch, but it serves its purpose well if it drives even one viewer to ask for help or step up for someone else.

Shannen Doherty leads an impeccable cast in her first major role following her breast cancer treatment and recovery. She is very, very good here as Laura Collins, a single Mom to teenage Sarah (The Ties That Bind‘s Matreya Scarrwener). Sarah is smart, and funny, and solidly part of a three musketeers trio with Laura and her BFF, Nikki (Sacred Lies‘s Chanelle Peloso).

She’s happy, and in a good place, until she sparks to new transfer student Rob (The Other Kingdom‘s Callan Potter), captain of the wrestling team and perfect on paper, who takes an immediate and playful, yet still aggressive, interest in her, too. He even passes Laura’s sniff test.

Their courtship progresses pretty quickly, as does his possessiveness. Sarah, in her first relationship, is caught off guard the first time her hits her, but she doesn’t tell anyone, and she doesn’t leave. She discusses her concerns with Laura in vague terms, and in relation toÂ Laura’s own dating, with the tiniest details that later become telltale clues.

In the following weeks, the violence escalates and Nikki finally twigs to the dangerous relationship, shaking Sarah loose from her acquiescence to his version of reality–that she’s the cause of his behavior. Sarah finally sees it for what it is, and how the friends proceed from there is complicated, with repercussions that only become apparent later. Look for an extraordinary scene between Scarrwener and Peloso as they grieve together about Sarah’s experience, and Nikki desperately tries to counsel her and shepherd her safely through it.

Heartland‘s Gail Harvey directs a script by Wynonna Earp‘s Caitlin D. Fryers that frames trial scenes around flashbacks. The movie tells Sarah, Laura, and Nikki’s story, and how each reacts within, and to, the central relationship. We never see Rob outside of his interactions with Sarah and their friends, but we can fill in the blanks about what shaped the dark golden boy.

No One Would Tell airs Sunday night at 8 pm/7c on Lifetime. Here’s a sneak peek. Click here for information on abuse victim resources.

POV Preview: A Group of Hasidic Women Confront Patriarchy and Prejudice in "93Queen"

Julian Doucet Talks About Killjoys "The Kids Are Alright?" [Exclusive]